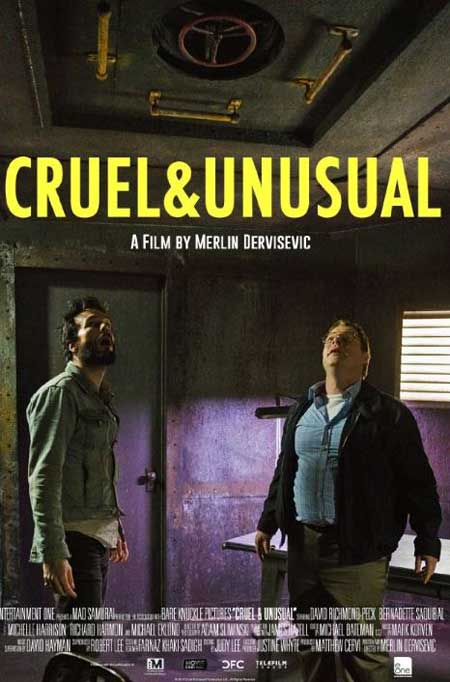 Wrongly condemned for killing his wife, a man finds himself in a mysterious institution where he is sentenced to relive her death for eternity.

Let’s play a game. Imagine a man whose biggest gig so far was being an assistant decorator on the set of Supernatural and writing two movies for Canadian television. Now imagine this guy writing and directing a film that tries to handle topics of guilt, regret, death and redemption. This person is Merlin Dervisevic – writer and director of 2014 Cruel and Unusual. Dervisevic surely is a bold and ambitious man who’s set the bar very high for himself when it comes to the movie’s premise, but did he manage to deliver?

Right from the beginning, it becomes obvious that he is a very good writer. It is hard to cast light on his creation’s plot without spoiling it, given the film’s relatively short running time (91 minutes) and the fact that it is fraught with clever little twists and turns. At the beginning we see Edgar, middle-aged English teacher, who dies right after failing to save his wife’s, Maylon, life. Then we are treated with what seems to be a brief flashback of the events that led to the couple’s death after which Edgar wakes up… In hell. I have to warn you though – don’t expect lava, fires and horned demons, oh no; Dervisevic can do way better than that. His hell resembles a mental hospital where every “patient” is forced to relive the event that made him or her end up in this place over and over again. They also have to share their thoughts about what they did during the most traumatizing group therapy sessions ever put on screen. At first Edgar has no idea why he has to share a room with parricide and childkiller, among others, but soon – after reliving and analyzing the day of his and Maylon’s deaths from different points of view – he starts to question his actions and intentions.

Of course, good writing does not always equal good execution. It is clear that although Dervisevic did his best, Cruel and Unusual still lacks some elements in this department. But before I start talking about what could have been done better, let’s talk about what is good. As anybody can guess, the film is very flashback-heavy, but it is so in a smart way. Every time Edgar is taken back to the final moments of his life he discovers new details about what led to his and his wife’s end. As I’ve mentioned before, twists occur literally every couple of minutes and the viewer, just like Edgar, changes his mind about characters and events after every single retrospection. Unfortunately, this is where short running time starts causing trouble. Some plot points occurred way too fast, especially those regarding Edgar’s realization of the fact that what he thinks he did may not be what he really did. For what feels like a very good slow-burner, these changes felt rushed and a bit out of character. Had somebody decided to add another 20 or 30 minutes to the movie’s final 91, not only would Edgar’s story feel more believable, but there would be more time to flesh out the subplots.

This brings us to another point – performances. This is probably the biggest asset of Cruel and Unusual. Edgar, the movie’s everyman, is played by David Richmond-Peck, who manages to show a drastic change occurring in his character’s psyche while keeping the performance credible and subtle. He did well, but it does not give him much place to shine. This can’t be said about his supporting cast: Michael Eklund (The Call, Poker Night) plays his “creepy charismatic jerk” shtick to perfection stealing every scene he’s in, Michelle Harrison (Flash, Hit ‘n Strum) is perfectly cast as a good at heart outcast with dark past, and Richard Harmond (The Killing) is appropriately devoid of emotion as a sociopathic parricide. At this point I have to mention the running time again. These three have very interesting dark backstories and while they all express different attitudes to their past deeds (cynicism, indifference, mind-your-own-business introversion, etc.) there is much more to them. One of the most memorable moments of the film is a wonderful montage (set to very fitting Shriekback song) of all four characters experiencing their darkest moments – it is beautiful, touching and shows that there is so much more to the characters that we get to see in the film.

Unfortunately it is a wasted potential as we’re never going to see that.

All these issues make Cruel and Unusual a perfect example of what I call a “but-movie”. It is well written BUT execution is only decent, there are smart twists BUT they’re rushed, the cast is very talented BUT underused… I could go on like this for days, but that is not the point.

The point is: It doesn’t mean Cruel and Unusual is a bad movie. It is very, very good. I like the way it handles very difficult, sensitive subjects, really can’t praise the actors enough… BUT at the same time it has its flaws. The flaws that could’ve been avoided and, had it been Dervisevic’s second or third “big” movie, we’d be left with a perfect surreal tale of sin and redemption. Instead, we’ve got ourselves a movie that is just very good… and, sadly, nothing more.