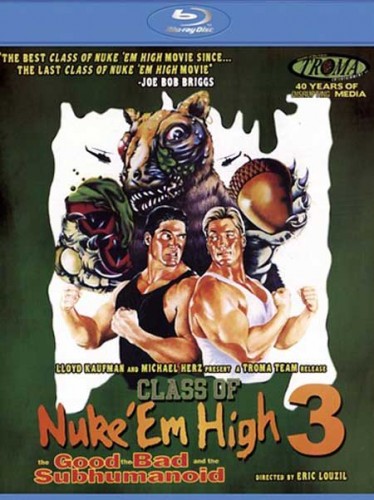 The fully grown and muscular, yet only two- year-old offspring of a human father and subhumanoid mother, Adlai Smith must protect his beloved Tromaville from an evil corporation and his evil twin brother hell-bent on turning the town into a toxic wasteland.

When you watch a Troma movie you are not going into it expecting strong character development, meaningful dialog or even a semblance of a story, no you watch a Troma movie for the inanity, the nudity, the violence and the gore. Watching it for any other reason is a fruitless exercise and will server to only make you insane, rape your pet and run around at your next family reunion with faecal stained underwear on your head whilst you inappropriately touch your grandmother all the while singing “Dancing Queen” by Abba. 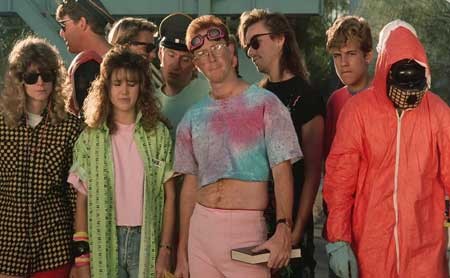 Using Shakespeare’s The Comedy of Errors as its source material (VERY loosely, I might add), Class of Nuke ‘Em High Part 3: The Good, the Bad and the Subhumanoid picks up where part II left off, with a giant mutated squirrel wreaking havoc on Tromaville. The squirrel is quickly “subdued” and life returns to “normal” at Tromaville. We meet/hear our hero, Adlai Smith, the two-year-old offspring of Roger and his subhumanoid girlfriend from Part II. Unlike pure-bred subhumanoids, Adlai doesn’t have the grotesque stomach mouth but grows at an accelerated rate, so even at only two years of age, Adlai is a fully grown male who loves life, Tromaville and his perpetually G-stringed gal, Trish. 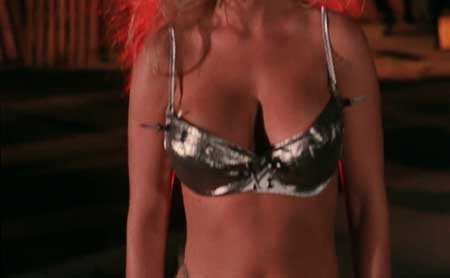 To get the viewer up to speed (and through the rest of the film) Adlai spews forth mountains of expositional voiceover, most of which was completely redundant and simply reiterated what was happening/said on screen. Anyway, the story boilt down to this: Unknown by his father, and now dead mother, Adlai and his twin were separated at birth by the dastardly Dr. Slag PhD, who took the other twin, Dick, and trained him in all things evil while Adlai was being trained in all things good by his father Roger, the elected mayor of Tromaville.

Adlai is just living his life, attending classes at Nuke ‘Em high and banging Trish, when he begins to possess a special power, a NUCLEAR HAND. This new found power lets him heat up glasses of water, pleasure Trish without touching her and power the whole of Tromaville efficiently and safely. 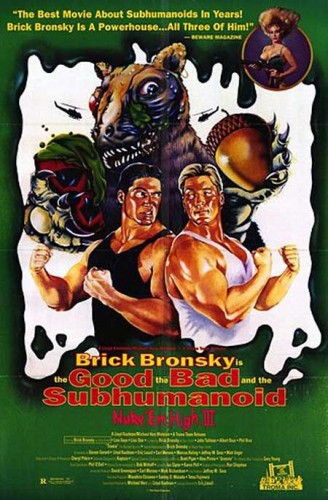 Dr. Slag PhD wants to turn Tromaville into a toxic wasteland (for some reason) and when he learns of Adlai and his nuclear hand AND his brotherly relationship to Dick who also possesses this special power, the evil Dr. Slag PhD sets about tarnishing Adlai’s goody two shoes reputation (for some reason) by having Dick impersonate his twin brother at Nuke ‘Em high.

With Adlai captured and Dick questioning his allegiance, Dr. Slag PhD intends to combine the twins’ nuclear powers to meltdown Tromaville. Will his evil plan work? Will Dick learn the error of his ways? Will Adlai save the day? 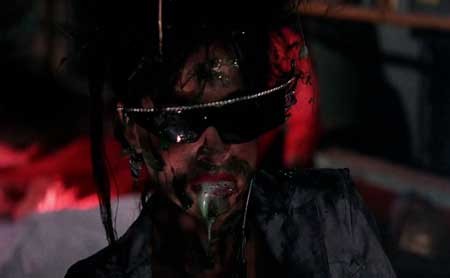 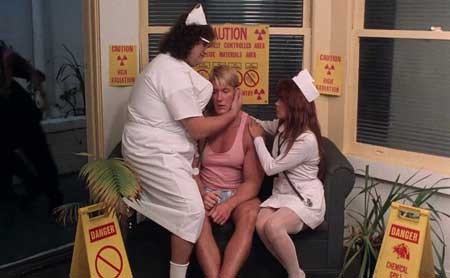 Class of Nuke ‘Em High Part 3: The Good, the Bad and the Subhumanoid is your typical Troma fare that’s heavy on the voice over and ADR and light on the story and budget. Not as entertaining as its predecessors, CoNH3 is a silly little affair that had me smirking in parts and groaning at many others. The story meanders for the most part with no real focus. Our antagonist was only truly antagonistic in the third act, so the two preceding acts were rather bland, with the gags and nudity throughout them unable to carry the film to the final stretch, which was rather weak itself.

As mentioned earlier, the voiceover was constant and most of it was redundant. Voiceover is good when it gives insight to a character’s inner feelings or monologue, or when it relays a part of the story not shown on screen, but in CoNH3 it was mainly used as a running commentary, which was rather grating.

Brick Bronsky, who played Dick, Adlai, Roger and a baby, did well enough in terms of his acting, while everyone else was at the expected, and typical level, of a Troma film. The effects and gore were minimal and pretty crap; it was disappointing as over-the-top gore is one of things Troma films are known. A lot of ADR was used, so I am assuming that there were sound issues during the shoot, or new dialog was thought of after it.

Would I watch this again? I’ve seen this movie a few times now and though I wouldn’t intentionally watch it again, I wouldn’t complain if a friend or HN wanted me to watch it one more time in the distant future. 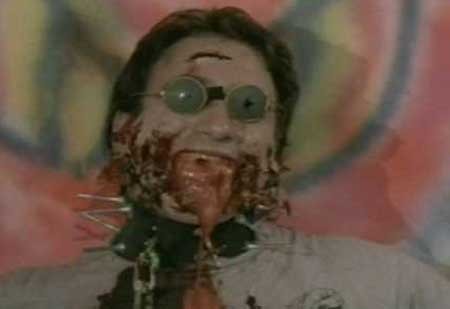 Would I recommend this film? If you’re a Troma fan, go ahead as this is typical Troma fare that is sure to satiate your inane need for, er, inanity. If you like your Starbucks, wear suspenders, glasses when you don’t need to and think it’s cool to wear a scarf in summer, give this a miss.

Class of Nuke ‘Em High Part 3: The Good, the Bad and the Subhumanoid is now available on bluray per Troma Entertainment