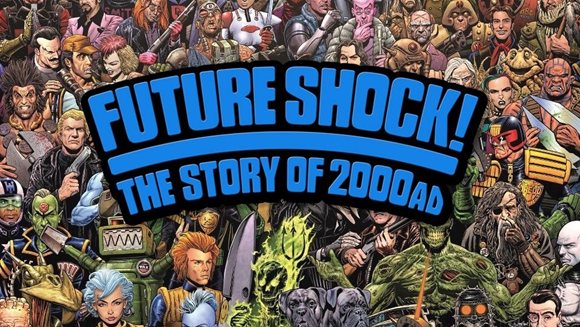 Documentary covering the highs and lows of 2000AD’s history, from its inception after the demise of Action to the present day.

I originally saw this glorious documentary at a very early screening at the Broadway Cinema here in Nottingham, England a little while back and it absolutely blew me away. Had I written this review that night, it would have been even heavier on the hyperbole. I’ve calmed down a bit now. That said, a documentary this damn good deserves some hyperbole. 2000AD is an institution, a brilliant middle-finger at the established norms of genre fiction and established norms in general.

An adventure/sci-fi/horror/action anthology comic which began in 1977 and is still going strong to this day, 2000AD is unlike any other comic out there and has been a part of my genre intake ever since the love of the weird and the fantastic took hold of me as a kid. It brought the world Judge Dredd, Rogue Trooper, Nemesis the Warlock, Halo Jones and a host of other classic and contemporary works of comic brilliance.

This documentary freaked me out a bit when I heard it was on the way. It had a lot to live up to. 2000AD is a one-off. There have been countless other anthology titles out there, Heavy Metal/Metal Hurlant, Dark Horse Presents, Overkill, Eagle, so very many of them, but not one has been like 2000AD.

Thankfully, the film is a very well-handled effort which does help to explain the mayhem behind the galaxy’s greatest comic. Directed by Paul Goodwin, the documentary gets underway with an absolutely blistering animated opening title sequence set to raucous punky metal, and there are further animated sequences throughout the film which act as very nice introductions to each section of the narrative.

Some parts of the film are a little uncomfortable, such as when interviewees talk about their own shortcomings or decisions which went wrong, or occasionally tearing each other to bits, but all of that just adds spice to an already dramatic story.

The interviewees are engaging and their stories do paint a vivid picture of what made and continues to make the title tick. It’s a remarkably well-executed documentary which presents 2000AD’s chaotic early days and development in an absolutely engrossing manner.

Something that is raised in the film is that 2000AD is sometimes seen as a stepping stone for creators, an apprenticeship that helps aim talent at larger publishers. While that may be true in some respects, it’s not true for me. For me, 2000AD is something to aspire to write for. It’s the backbone of comics for a lot of people, the sole survivor of home grown comics on the high street, and as this film demonstrates, it remains as subversive, as chaotic and as brilliant as always.

Future Shock! The Story of 2000AD is an honest, occasionally difficult yet powerful look into the inner workings of one of the most formidable comic books that has ever existed, a title which has brought science fiction, horror, fantasy and brutal action to generations of fans, not to mention inspiring generations of creators. This documentary is drokking zarjaz, as it were. For the uninitiated, that means it’s bloody brilliant..