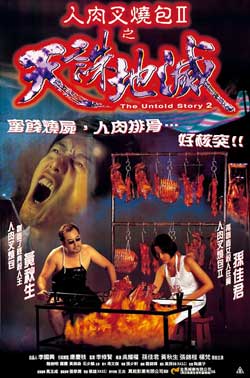 Cheung runs a no-frills restaurant in Hong Kong. His oversexed wife, prone to sudden lustful outbursts and masturbatory frenzies, loathes him for his impotence. They work side by side in the restaurant, although she often takes time out to go shopping and meet her lover. When her cousin, Fung, arrives from mainland China, Cheung finally has the inspiration he needs to get it up, and he and Fung start a passionate affair. What he doesn’t realize is that Fung, having experienced a brutal trauma at a young age, is batshit crazy, and will do whatever it takes to replace his unappreciative wife – including murder, dismemberment, crucifixion and cannibalism.

The Untold Story (1993) was one of the crowning achievements of the Hong Kong Category III explosion of the time. It proved to be an enduring benchmark for the genre, with its shameless cocktail of repellent violence, perversion and misogyny, and a nasty tone that somehow managed to simultaneously revel in goofy humor and slapstick. It even earned its ubiquitous star, Anthony Wong, an award for best actor at the Hong Kong Film Awards – an unthinkable outcome in the entertainment industry of the West, considering the film remains cut or banned in many countries. 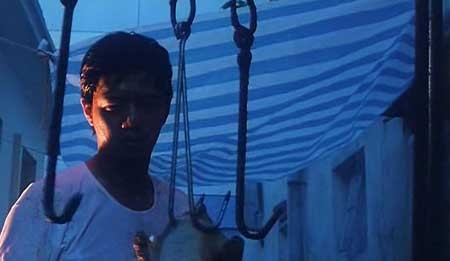 A sequel was always going to have big shoes to fill. It may come as no surprise that The Untold Story 2, appearing five years after the original, is merely a weak and vastly inferior cash-in. The kind of sequel that retains the title, a narrative hook (restaurant patrons unwittingly eating human flesh) and a popular actor (Wong) from the first installment, but ignores the rest of the recipe. Perhaps original writer Kam-Fai Law had run out of steam by this point, but the depths of degradation wallowed in by the likes of The Untold Story and the previous year’s Dr. Lamb are sorely missed this time around. 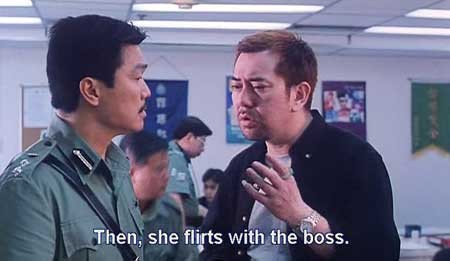 The Untold Story 2 reduces the scenario to the tired approach and stale formula of the psychotic chick sub-genre – earlier films like Fatal Attraction and Single White Female, redressed more recently (but no more convincingly) as Gone Girl. A mysterious woman arrives, sets her sights on the main character while attempting to ingratiate herself with his family, and methodically puts into motion a ridiculous plan to take his wife’s place, as if nobody will notice. The object of her affection, a mild-mannered milquetoast, is all the while powerless to stop her. 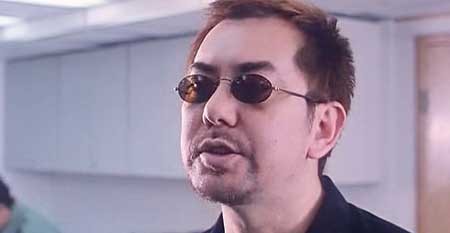 In the meantime, a bumbling cop shows up for a meal periodically, his suspicions aroused by the dubious foreigner but his taste buds more worthy of attention. Anthony Wong’s chilling performance as the vile villain in the first film is remolded into a light turn as Officer Lazyboots – the clumsy cop who makes a habit of losing his firearm. The alluring Paulyn Sun (later appearing in Takashi Miike’s Ichi the Killer – not to mention her status as Miss Singapore 1994) cultivates a seductive air of malice around her role as the cousin, while helping her female costar to provide the kind of eye candy and overstated whimpering usually offered on the Category III menu. 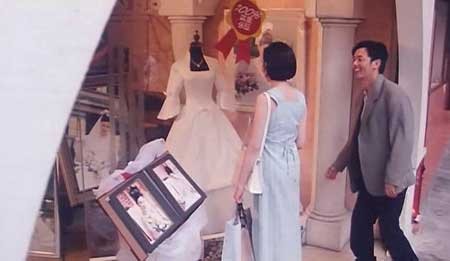 The Untold Story 2 kicks off with full frontal nudity and provides plenty of softcore sex – but don’t expect the vicious carnage and wall-to-wall splatter of the original film. When the violence erupts halfway through the sequel, it lacks the excess that typifies the Category III canon, and mostly remains restrained throughout the film, even at the climax. When the power tools are brought in after the first murder, the expected bloodbath is relatively discreet, and the subsequent roasting and eating of body parts is likewise rather unexciting.

A year later, the origins of the series would be further distorted by a second sequel, which also skimped on the gore, directed by original director (and genre titan) Herman Yau. The golden era of Category III extremity having passed, the emphasis would often be placed on police procedure, incorporating horrific true events. This trend was upheld by two gritty and grimy films in 2001, based on the same incident: Human Pork Chop and There is a Secret in My Soup. Following this, crime action/drama displaced the more overt horror of the 90s in the Category III stable. Let’s face it; on the basis of The Untold Story 2, some of these stories are better left untold.