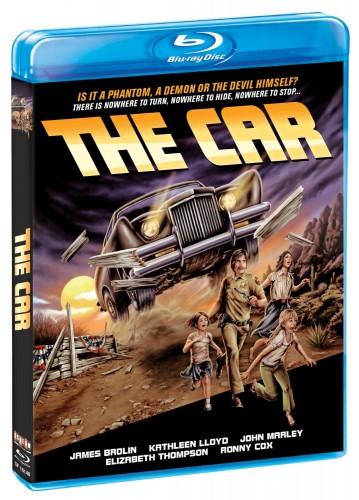 A sleek, possessed black car terrorizes everyone it comes in contact with in a small town in Utah.

If a film about a demonic car terrorising the residents of a small American town sounds like silly fun to you then you would only be about half right. ‘The Car’ is not a good film, but nor is it as bad as you’d like it to be. The concept is not dissimilar to either ‘Christine’ or ‘Maximum Overdrive’, but lacks the confident style of the former and the laughable ineptitude of the latter. Mostly, it’s just a bore.

That it opens with a quote from Church of Satan leader Anton Lavey and with musical strains reminiscent of The Shining should give you a good indication of how seriously it takes itself. This is not a bad thing; no film, good or bad, achieved its status without ambition behind it and belief in itself. The most entertainingly bad films are a bit like a glorious car-wreck you just can’t look away from. No such luck here. This is more a like mild collision, in which everyone walks away just fine, if not a little annoyed.

The lack of knowing winks to the audience and dead-serious tone are quite bizarre, given how ludicrous and imbecilic the dialogue is. The writers seem to have confused idiotic banter with characterisation. They do seem like they’re having fun with it though, which is good, because at least someone is. Their conviction in their writing is kind of adorable really, but in service of nothing.

The characters are paper-thin and the plot is even thinner. This is essentially a slasher-film on wheels, but the road map for that genre is missing and we are left wandering aimlessly through a highway of disparate story beats without any real destination in sight. The car shows up, it kills, repeat.

Responding to the scene of its first victims is Captain Wade Parent, who is indeed a parent. His girlfriend Lauren is not, but would like to be. It’s established in an early scene – after a bit of playful morning banter, which devolves into a playful near-sexual assault – that she desires the approval of Parent’s two young girls. This subplot feels like it might be our through-line for the film. It’s not. It’s resolved fairly early, and the daughters completely forgotten from the screenplay. This is just one of several subplots that go nowhere. 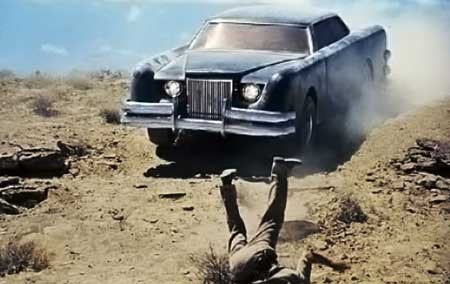 The first murder involves two cyclists, who seem to die for no other reason than to kick the plot into gear. They are not run over as you might expect, but flung rather spectacularly from their bikes and over the railings where they meet their deaths in the chasms below. “The Car” borrows again from slashers in this respect. It’s not enough to just murder people. It is essential find creative and varied ways to eliminate its victims.

The car knocks riders from their horses by flinging dust into their eyes (though it’s hard to tell if they actually die as lots of people just fall down in this movie and just never get back up). There’s an admittedly spectacular explosion caused when it barrels sideways into two oncoming police cars before flipping over the top and continuing on its merry way. Later it has the opportunity to run someone down, but forces him slowly off a cliff instead. Why does it do this? Is it this meant to demonstrate its malice in toying with them, or is it just a jerk?

A huge problem with the film is a lack of clear motivation for the car and reason for its existence. This thing isn’t killing indiscriminately. It forgoes the opportunity to kill Parent in favour of knocking him out with its door in a scene seemingly devised solely to establish it as indestructible (but not too indestructible, as we later find out). It swerves around one character before running down another. It mows down a hitchhiker, but only after he has flipped it the bird for not stopping. One can only assume it has a fragile ego. If this car were human you would always be walking on eggshells around it, and it wouldn’t get invited to parties.

The lack of context and information surround the car is meant to be mysterious, but instead is inexplicable and inconsistent. It takes great pains to let us know that something is not right about it, but to no purpose. There’s the amber POV from inside the car (what are we seeing here? Is this what the car sees? Does it see from within itself?), the mysterious winds that rise up with its presence and, of course, a character exclaiming, “There was no driver!”

Oh, and it announces itself by honking morse code for “X” whenever it appears. I guess this is meant to be sinister somehow, but is there anyone for whom a car honking is anything but completely obnoxious? You may read more it into than I did. If you’re the sort of person that does, I’m assuming you don’t get invited to parties much either.

When it corners Lauren and a bunch of students in a cemetery but will not enter, she earns cheers of adulation when she tells it off so hard it turns its tailgate and flees, or at least that’s what they think. You and I know better. We are thinking of the words “hallowed ground” long before anyone in the film actually utters them. 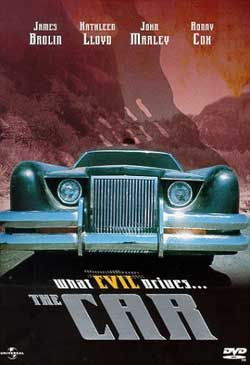 If I can offer the film any praise at all it is of the photography. It’s quite a good-looking film. The canyons and stretches of highway make for a great location and are lensed quite nicely. More competent hands might have utilized these spaces and wrought some nice scenes of tension and suspense from the dreckish screenplay, but it feels like missed opportunity. Some of the stunts are impressive enough, though. Oh, and the final line “Whatever it was, it isn’t anymore,” is an absolute killer. Is that a spoiler? If you still care about spoilers after what I have described, then you are the audience for this film, and I apologise sincerely.

The film was listed in ‘The Official Razzie’s Movie Guide” as being among the most 100 entertainingly bad films ever made. Before he is slain, the hitchhiker waxes lyrical about ‘musical farts’. This is as good an analogy as any for entertainingly bad films: unwanted and unpleasant, but offering unexpected and shameful pleasures. Unfortunately ‘The Car’ doesn’t even work on this level. It’s just a fart.

The Car (1977) is now available on bluray per Shout Factory