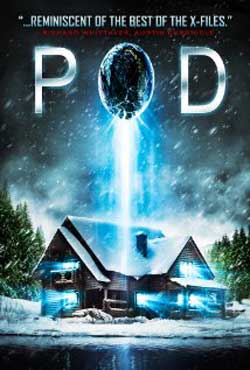 A family intervention goes horrifically awry within the snowy confines of an isolated lake house.

Mickey Keating’s Pod opens in a snowy woodland; there, we see Martin (played by Brian Morvant), who walks between the trees, gun in hand and dog at his heel. Things go awry, however, when his dog runs off, only to be found in a bloody heap moments later. While it’s clear that Martin sees something in the woods, we lowly viewers are left in suspense. Damn.

Meanwhile, Ed (Dean Cates) and Lyla (Lauren Ashley Carter) are introduced. They’re Martin’s brother and sister, and a lot of the first half of the film focuses on their relationship and history with one another. They make for quite a dysfunctional trio – Ed is caught up in his career as a psychologist, while Lyla is too busy partying hard to keep in contact with her family. Martin is the icing on the cake. It’s revealed through the story that he’s been institutionalised in the past for his mental illness, meaning that he’s not necessarily a reliable source of information; one of the major cruces of the film’s plot. 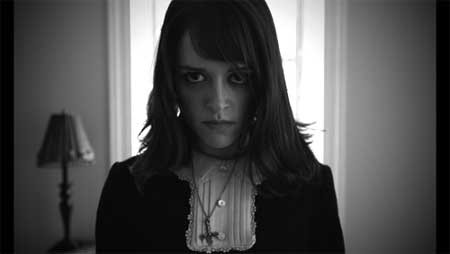 Ed receives a voicemail from Martin, telling him not to visit the lakeside cabin where he’s been staying in an attempt to escape from the outside world. Naturally, the first thing Ed does, after collecting Lyla, is to go straight to the aforementioned location for a family intervention, assuming that his brother is suffering from some sort of mental breakdown. However, once they’re inside the cabin, they begin to realise that things aren’t quite right; Martin has undoubtedly locked someone – or something – down in the basement, and starts spouting information about a government controlled experiment (something about super soldiers). He claims that, since his departure from this facility, he’s been tracked via a chip in his tooth, which he has since removed and smashed into little pieces with a hammer. Whatever is trapped in his basement, he claims, is a product of these experiments.

As far as Ed is concerned, this proves his fears regarding his brother’s mental health. Thus begins an exceptionally long argument (oh, and there’s a monster in here somewhere – promise!).

In spite of its potential, Pod felt a little underwhelming. Too much of the plot focused on the dispute that went on between the siblings. While there were plenty of intense scenes where the three of them butt heads, they came one after the other and drew the attention away from the film’s ‘creature’ – perhaps this was Keating’s intention, but I can’t be certain. The first half hour of the film (at least) felt much more like a psychological thriller than a genuine horror flick. 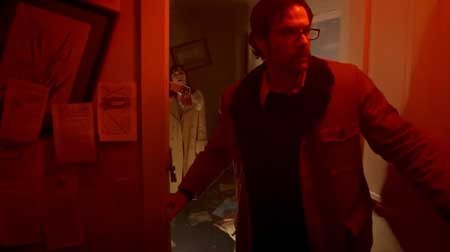 From the outset, I wanted so badly to know what sort of awful creature was plaguing Martin’s day to day life; however, when it came to the big reveal, I was more than a little disappointed. The ‘thing’ looked like a man covered in dried papier-mâché and fake blood – don’t expect anything special. Mercifully, most of the scenes involving the creature were shot in low or flashing light, but even that didn’t do much to distract from how cheap it looked. Unfortunate, given the lengthy build-up.

The setting itself was perfect horror fare – an isolated cabin, surrounded by woodland, made even creepier by Martin’s paranoia-fuelled DIY. It was a pleasant change from Lyla’s sterile apartment, which, given that she’s an alcoholic (and presumably a drug addict to boot), was surprisingly clean, save for a carefully placed bottle or two.

Pod is quite short, with a runtime of only 76 minutes, so it’s understandable that the plot had to be wrapped up at a greater speed than would be necessary in a longer film. Movies of this length tend to require a tight structure and engaging story from the outset in order to make things work, and while I don’t feel that Pod failed completely in this respect, it certainly fell short of my expectations.

I really wish that Keating had gone the whole hog with the ‘government conspiracy’ concept – to me, while the idea of the ‘pod’ (which, weirdly enough, we never see as an actual pod) was pretty interesting, it’s involvement in the film, as well as its backstory, were too weak to support everything else that went on. I would have liked to have seen more of the character of Smith (Larry Fessenden), who is introduced towards the end of the film – I can only assume that he’s some sort of government agent, and feels as if he stepped straight out of an episode of The X-Files. Unfortunately, he doesn’t get much screen time. Boo.

Ultimately, Pod isn’t a terrible film – it really depends on what you’re looking for. The acting wasn’t too bad, especially when it came to establishing the characters and their various neurosis; it becomes apparent quite quickly that, despite what they might think, Ed, Lyla and Martin are just as messed up as one another. In many respects, I think the character design was more to blame for the story’s failings than the actors themselves.

As a psychological thriller with a spooky edge – you could do a lot worse. But if you’re after a hard-core monster movie with blood and guts galore, Pod probably isn’t for you.