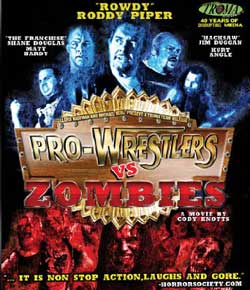 Famous Wrestlers are pitted against hordes of undead when they unknowingly walk into a death trap.

The story in a Boston Crab-shell (see what I did there…): Shane “The Franchise” Douglas kills a fellow wrestler in the ring after he catches the dude getting it on with his girl. Unknown to Shane… or the viewer… and possibly the writer, the dead dude’s brother, Angus, the perpetually goatee stroking manager, practices black magic and has vengeance on his mind. Instead of resurrecting his own dead brother, Angus decides to kidnap a nurse outside a hospital, rip her heart out, eat it and complete the ritual to raise the dead (minus his brother…) from their eternal slumber to seek vengeance on Shane. Instead of attacking Shane at his own home or something equally direct and efficient, Angus decides to concoct an elaborate fake wrestling event at an abandoned Jail and has other former wrestling greats, mainly “Rowdy” Roddy Piper and “Hacksaw” Jim Duggan, and some new talent to attend the macabre event. 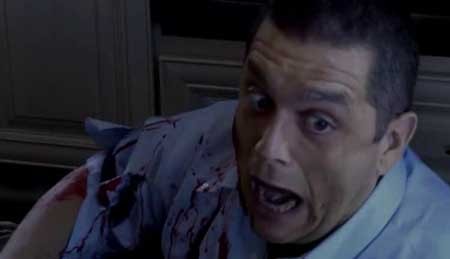 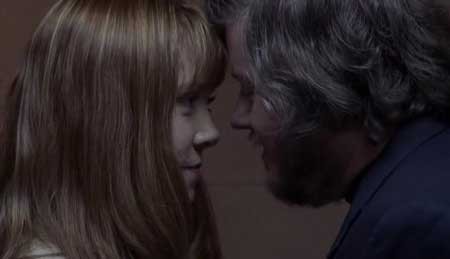 Will the wrestlers survive the event? Will Angus get revenge for his brother’s murder? Will anyone in this film take acting lessons?

PWvZ was an amateur effort in every detail. No expense was spared in utilising the least amount of money, story, dialog and acting ability to put this film together. With movies of this ilk the action and/or comedy components are typically the main attraction and you try to disregard any story or developmental elements. To this effect, the action, for the most part, was entertaining due to the wrestling component. Witnessing zombies being dispatched by wrestling moves was a unique twist PWvZ put on the tiring zombie genre.

The story was the weakest aspect of PWvZ. It was unfocused, following Shane for a good part of the start leading you to believe he was the protagonist but then shifted to Roddy (a good choice), Shane being relegated to an unfocused character that was more antagonist than protagonist or at least even an anti-hero. He was an arsehole throughout the film and you didn’t care about his fate or his feelings when an attempt was made to force you to care for him later on. 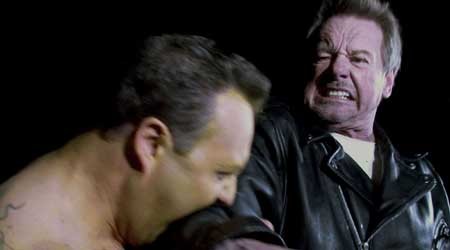 The whole demonic ritual came so far from left field it was like being slapped in the face with a salmon and never really referenced again. Some sort of set-up was really needed for that. Later on, Roddy somehow figured that killing certain zombies would harm the “demon” with no real possible reason for him to figure this out. WE, the viewer, were shown an overlay of the demon being affected, but I don’t believe Roddy could see that, so I am baffled how he figured it out. The script also suffered from the ol’ “untouchable hero” syndrome; at one point both Roddy and the heroine Sarah were literally covered by zombies and neither suffered a fatal bite. Roddy was crawling from them and the zombies were clawing at him, completing ignoring their usual trait of clambering on top and biting down like a fat kid at an all you can eat candy buffet. And even with this, they simply leave him alone and lumber to Sarah at one point. WHY? Scenes like this get my goat as they undermine the actual tension and horror the scene is supposed to evoke and make me feel like the writer thinks the viewer is an idiot. The ring scene was an even worse example of this syndrome and again, annoyed me. 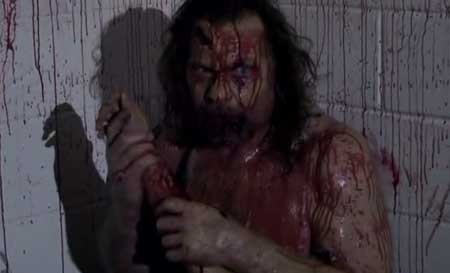 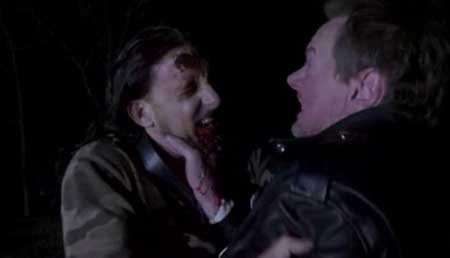 Dialog was poor for the most part with numerous cringe worthy sentences spouted by the “actors”. The amateur acting, which was expected since most of them were wrestlers and not actors, only compounded the bad dialog further and vice/versa. Don’t get me wrong, there were some amusing zingers, my favourite was Roddy’s “Ask Hogan” line, but for the most part it was sub-par. On the plus side, Roddy put effort into his character and was believable as the everyman (with more muscles and an inclination to spit on things and people) thrust into this situation. Adrienne Fischer, who played heroine Sarah, was kick-ass. Sarah was just as capable and tough as Roddy and it was refreshing to see a female character perform wrestling moves on the undead and not be a constant damsel in distress. Kudos to Cody for including her in the script even though her inclusion into the story was a little dubious and the scenes of her sexing up the event manager, played by the Cody, and his helper were really awkward and creepy to watch and offered nothing to the story or its progress.

Cinematography was sufficient and conveyed what needed to be conveyed well enough. Even the SFX, though not ground-breaking or fantastic, were sufficient considering the budget. The score, a mixture of metal and cock-rock, was the best thing of the film and suited the action on screen. 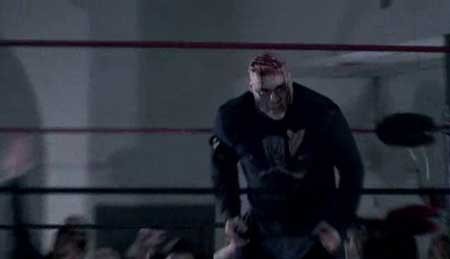 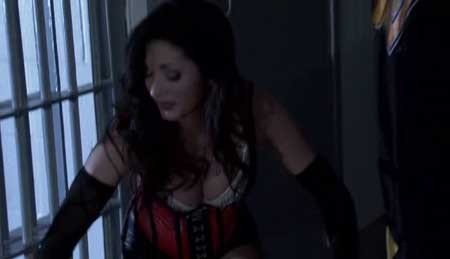 Would I watch this again? At the end of the day you need to ask yourself one question when watching these type of films “Was it enjoyable despite the many, many flaws?”, and to that effect Pro Wrestlers vs Zombies was, in some demented half-assed way, entertaining. Sure, there are a lot, A LOT of better zombies films out there, but I put PWvZ in the “So bad it’s good” category. I can’t see myself wanting to give this a second viewing any time in the foreseeable future though.

Would I recommend this film? If you enjoy your z-grade horrors and/or love wrestling in particular, you will have fun with Pro Wrestlers vs Zombies. Those wanting more substance, look elsewhere.

Pro Wrestlers Vs. Zombies is now available on bluray per Troma Entertainment