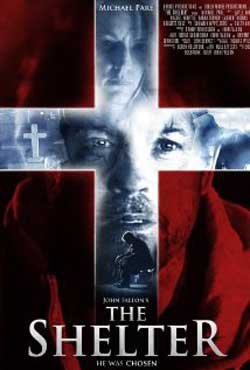 A homeless man stumbles upon a seemingly empty house and decides to take refuge there for the night. Unfortunately the house isn’t quite as empty as he thought and he is forced to face some of the inner demons from his past that have been plaguing him. Will he escape with his life or will the shelter become his tomb?

I was absolutely blown away by The Shelter. Written and directed by the always awesome John Fallon, this movie is well-written, creepy, suspenseful, a little depressing at times, and just a kick ass film in general. It is a different type of horror film that relies more on psychological scares than blood and guts and I thought that it was nothing short of brilliant for many reasons. It reminded me a lot of the films of David Lynch and Roman Polanski and is just a very strong, intelligent character-driven piece that is sure to satisfy viewers. It has a very interesting premise, some great acting, and is just one of those movies that make you think. I really enjoyed it and can honestly say that it was one of the best-if not the best-movie that I have seen this year. 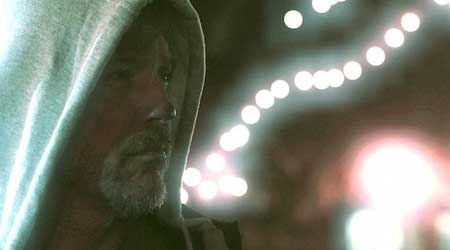 Without a doubt one of the film’s biggest strengths is its premise. It may sound simple but I assure you that it is anything but. I liked the fact that instead of having the main character face off against a random assortment of grotesque monsters, evil spirits, or bloodthirsty demons while trapped in the house Fallon decided to go a different route and it really pays off. Other than a few brief glimpses of the possible presence that lurks inside the house we don’t really get a good look at it and most of the things that Thomas (Michael Pare) is forced to deal with are the demons of his own making. I really liked how you aren’t sure if what is happening to Thomas is for real or if it is just taking place in his own mind due to his fragile psyche but it is sure to lead to a lot of debates among viewers after they watch it. The film is open to interpretation and we never quite get a solid answer as to what the deal with the house really is, but I thought it was an awesome touch and got me thinking. I have my own opinion about what it is all about and while I would love to share it I have to hold off in doing so because I don’t think I can accurately do it without giving away a few spoilers and I really don’t want to do that. The Shelter is definitely a thinking man’s horror film and is smart as it is entertaining. 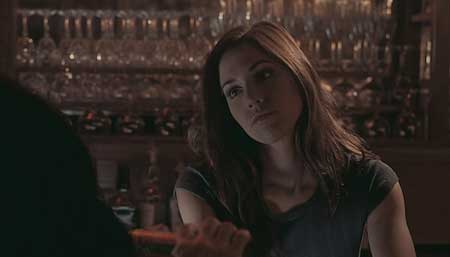 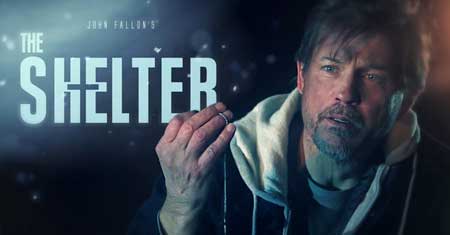 I also thought that the acting was top notch. Michael Pare knocks it out of the park as usual as Thomas, the main character. While some viewers may not like him due to some of his personality traits (he is a bit selfish and brash for the most part) I still dug him and thought that he was quite awesome. I couldn’t help but feel sorry for him in a lot of ways and I was rooting for him to get his happy ending the entire time I was watching the movie. I thought that he was a pretty complex and interesting character and Pare does an excellent job bringing him to life. As a matter of fact I really couldn’t see anyone else playing the part as well as Pare did and he really shows just how talented of an actor he truly is with this performance. He is in many scenes all by himself for the most part as the film has a very small cast but it works and the results are nothing short of stunning. Everyone else that does appear in the film does an equally impressive job and there was not a bad performance to be found anywhere in the movie. 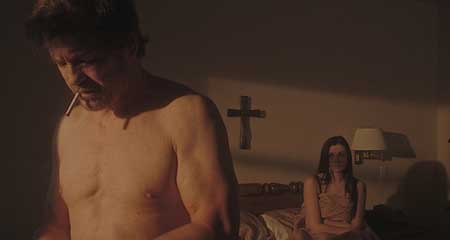 I feel like I have to say something about the ending as well. I really dug it and thought that it was pretty genius in a lot of ways. Like the rest of the movie the ending is open to the viewers’ interpretation and I can’t wait to hear some of the theories that people are going to have about it. I am sure that every person that watches it is going to view the meaning of the ending differently, and that is part of the reason that this movie is so great. I love films that don’t spell everything out for you and that is exactly what goes on with The Shelter, especially during the last scene before the credits roll. While some viewers may be a bit confused by how it ends I thought that it made perfect sense if you think about it and that it was the best way to end the movie for a number of reasons. 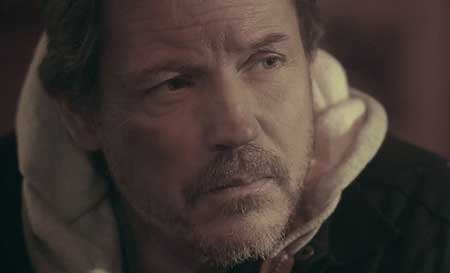 The Shelter is definitely a winner and I enjoyed the time that I spent with it. It is a different type of horror film and while it may not be for everyone I for one thought that it rocked. In addition to being genuinely creepy and unnerving at times it is also quite depressing as well and it just has a lot of heart in general. You can tell that a lot of passion went into this film and it really shows. If you’re in the mood for something a little bit different that really gets you thinking check this movie out as soon as you can. Trust me when I say that you won’t be let down. Highly recommended.