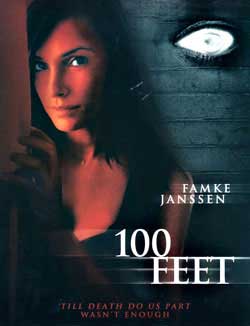 After killing her abusive cop husband, Mike (Michael Paré), Marnie (Famke Janssen) returns to New York to serve the remainder of her manslaughter sentence under house arrest. But Mike’s vengeful ghost isn’t done taunting her in this gripping supernatural thriller. Meanwhile, Mike’s ex-partner (Bobby Cannavale) keeps close tabs on Marnie, who must wear an ankle bracelet that doesn’t allow her to escape — let alone move past a 100-foot radius.

Marnie Watson (Famke Janssen) has just been released from jail and is sentenced to serve one year under house arrest for the murder of her abusive husband, Mike Watson (Michael Pare’) who was a New York City police officer. This movie has the same feel of many of the haunted house movies that are already on the market today, but, I feel that 100 Feet’s brutality sets it apart from the others, but not too far apart, mind you.

The movie opens up with Marnie, handcuffed, in the back seat of a car. We are treated to a credit Montague as she is driven through the urban scenery of New York City. The driver of the car is an undercover police officer, Shanks (Bobby Cannavale) who quickly establishes himself as a run of the mill, ass hole cop. However, in addition to his naturally angry demeanor, Shanks also harbors a great deal of resentment toward Marnie, since her husband was also his partner. He doesn’t believe that the deceased police officer was as abusive as she claimed him to be and assumes that Marnie killed Mike in cold blood.

As per the standard regulations of house arrest, Marnie has to wear an ankle bracelet that will track her movements within a 100 feet radius (100 Feet, get it?) If she travels outside of it, the ankle bracelet will begin to flash, furthermore, if she remains outside of her given space for three minutes, the authorities will be immediately alerted to her activity. This barely allows Marnie to answer her front door and completely bars access to her basement.

Simple tasks like getting her mail from the front door mail slot begin to become a challenge, so to help with her everyday necessities, she hires Joey (Ed Westwick), a young man who works at a nearby market to regularly deliver groceries to her house and bring her books from the library.

The strong female lead character has grown to become one of the major staples in the horror genre every since the slasher movie, so much that it almost seems obligatory now. Unfortunately, like many other staples, this one has become a little stale. Marnie’s character, in particular, leaves little room for character development. She’s a strong woman and stays that way throughout the film, although some things do deter her. The same problem plagues the rest of the cast as well. Joey is a charming young man who eventually wins the affections of Marnie, which, undeniably, infuriates the ghost of her dead husband. As far as the acting is concerned, everyone performs up to par, I think that the problem stems from the dialogue and the story itself. The horror element in 100 Feet is, thankfully, very present. The ghost of Mike Watson looks great visually and is one of the most relentless spirits I’ve seen on film. There’s even a scene that will please the gore hound in us all.

One of the most prominent elements that I can appreciate in this film is its use of symbols. When Marnie first arrives at home from jail, she notices a large bloodstain on the wall leftover from her husband’s final struggle, she paints over the stain but after each encounter that she experiences with her husband’s ghost the stain returns, just as bright as it previously had been. Another example would be her attempt to rid the house of her husband’s spirit by disposing of all of his possessions.

100 Feet is an enjoyable haunted house film. It doesn’t break any new ground, but it really doesn’t need to. I’m pretty sure that this film would appeal to the causal viewer and the hardcore horror fan alike and is one of the few films where I wasn’t bothered by a CGI creation. My only big complaint was the ending, which didn’t seem to have been thought out all too well, but I’ll let you be the judge of that.