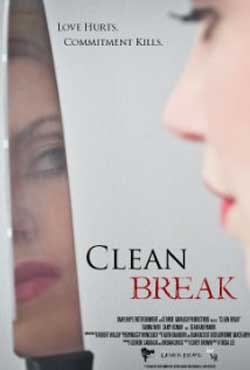 A psycho girlfriend, Tracy, moves in with her boyfriend Scott and his two roommates, Cam and Dan, only to start targeting them when they get in the way of her plans for the perfect relationship.

Using a worn plot we’ve all seen countless times before, CLEAN BREAK follows the hijinx of Tracy, a psychopath who’ll stop at nothing to achieve marital bliss with any fool stupid enough to bed her. This isn’t a good thing for our three amigos, Douche Face, Sir-pots-a-lot and The Other Guy, otherwise known as Cam, Scott and Dan, as Tracey has her love phaser set to Scott and her eyes on the house the three own equal parts of.

As you’d completely expect from a film with this this plot, Tracey does the typical nice gal/killer gal routine, pitting the mates against each other with weak conflict until the culmination of expected expectedness. The third act climax was cliché and every dramatic attempt was telegraphed from miles away, even to the point of the actors dragging out their movements until the right moment, so in the end I was served a rather typical ending to a typical film with a typical plot and story.

Cinematography was standard and conveyed what we needed to be seen. It was of a professional level but nothing awe inspiring, which is kind of hard to do in a film of this ilk. Sound was stock standard too, but served the film just fine. I dug the song used during the montage, though the montage itself was waaaaay too long…

Acting was a mixed bag with the biggest gripe being our titular character, Tracy, played by Tianna Nori. Delivery of Tracy’s evil and nice flavours were flat and felt the same, with the exception of a different facial expression to denote any real difference. This was a big deal for me as I didn’t buy her nice demeanour, nor did I believe she was truly evil so I couldn’t fathom the characters in the film believing it either. This type of character and balance is very difficult to pull off, no doubt, but I just felt that Tianna didn’t hit the mark in this film.

Douche Face was completely believable in his douchiness, and his face was the icing on the cake. He was so unlikable, I didn’t care if he lived or died which isn’t a good thing considering his importance to the story. Sir-pots-a-lot was believable enough as the shy, low-self esteemed somewhat stoner and I actually felt sorry for the dude, so well done to the film for eliciting some form of emotion from me. The Other Guy was, well, the other guy…

A standout performance for me though was side character Emma, played very naturally by Rachelle Corbell. Kudos, Rachelle. Kudos.

My biggest gripe, other than Tracy, was the story. It had the potential, but it stuck to the safe and (very) predictable. The opening scene shows Tracy killing her (then) current boyfriend before we move to the three amigos, and is then never referenced again. I know it was meant to be a hook, but how did she get away with a murder? Did she cover her tracks? Were the detectives that incompetent? An investigation side story would have added so much more drama, depth and conflict to the script.

To add to the story woes, we then had a lack of conflict between the amigos. It was the bare minimum to service the plot. At one point Tracy threatens Douche Face with a knife and some not so-direct-words, but does he confront Sir-pots-a-lot about it? No. He just holds it in and goes on with his life. That would have been a great scene, Douche and Sir-pots arguing about what Tracy may or may not have said. Some good conflict was lurking in the shadows of CLEAN BREAK but it was never pulled out and held up to the light.

Would I watch this again? No. I found it predictable and lacklustre. Not at all thrilling or horrifying.

Would I recommend this? Maybe for horror newbies and those who like thrillers and are very easily thrilled. But at the end of the day, there are a number of far better films with the exact same story out there, so you’d be better entertained watching them.