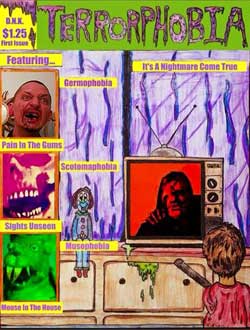 A little boy stays up past his bed time to watch “TerrorTime” on TV. Three horror yarns about people suffering from different phobias unfold in the worst of ways.

Today I have an indie film sent to me by a filmmaker in New Orleans, Lousiana. I spoke with him about the film before I saw it, and he told me what a struggle it was to get this thing done. Everything that could go wrong, did go wrong. But he was finally able to get it done and I was more than happy to give it a look.

The film is TERRORPHOBIA, written and directed by Kevin E. Scott (TOOTH AND NAIL, TREASURE CHEST OF HORRORS 2, TRAILER PARK OF THE LIVEN’ DEAD). A classic anthology horror film that gives us three tales based upon irrational fear. Mr. Scott plays the protagonist in all the stories, as well as the main character in the wrap around story.

The wrap around story is called LIGHTS OUT. We have a young boy named Toby (Caleb Cladcleugh) who won’t go to bed because of the monsters underneath. His foster mother (Kevin E. Scott) explains that there is no monster, and all the foster children who have come through before never had a problem so he should buck up and go to bed. 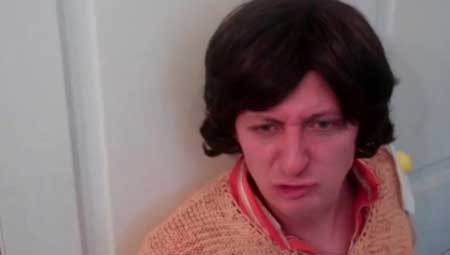 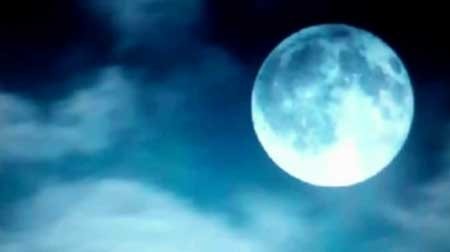 The first story is PAIN IN THE GUMS. Oren Paisley (Kevin E. Scott) is a germaphobe, wearing latex gloves everywhere he goes, eating pre-packaged food, and only using bottled water. He has a walkman with a self-help tape running to give him the courage to get over his fear. As he is brushing his teeth before work, he runs out of bottled water. He decides to take his chances and rinses his mouth from the tap.

Turns out Oren’s fear of germs is dead on. The tap water creates a cold sore, which turns into a parasite that talks to him. At first, the parasite seems helpful, but after a while Oren realizes this is anything but good. Oren must find a way to defeat the parasite before he loses complete control of his mind to it.

One night, a traveling salesman named Alabastar Binx (John Pinelle) arrives and offers Doris a bottle of pills that will cure her eyesight problems forever. There will be some side effects, of course. But once all the pills have been taken, the side effects will cease. 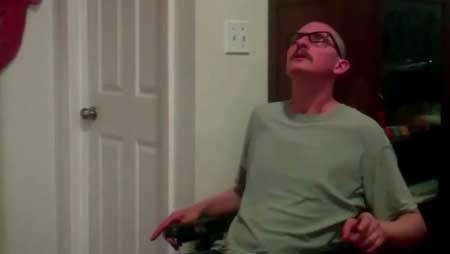 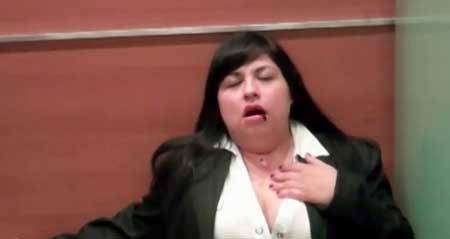 Doris is skeptical, but decides to give it a try. Moments after taking the first pill, her dead dog appears in the bedroom. And the hallucinations don’t stop there. Doris has to decide if the side effects are worth not losing her eyesight, which is her worst fear. As time goes on, the hallucinations get worse. But are they just hallucinations? Or something much worse?

The last story is MOUSE IN THE HOUSE. A disabled alcoholic named Albert (Kevin E. Scott) is starting his time in a halfway house following a drunk driving incident that resulted in the death of a child. Albert has one great fear – rodents. Turns out one of the other housemates had a pet mouse get loose and it’s somewhere in the walls. Albert tries in vain to trap the thing, only to find that this is not your everyday, ordinary rodent. What exactly is living in the walls?

I’ll be honest – the sound mix on the film is not great, and the special effects are reflective of the low budget. But that being said, the writing and acting is quite good. Mr. Scott has a good grasp on the genre of 80s anthology horror. Any one of these stories could have been on Tales from the Darkside and it would have fit right in.

There are endless references and hints to classic horror films throughout the film. I won’t point them out. I wonder how many you will pick up on? I know I only caught about half, and I consider myself quite the horror nerd. Also, watch closely for a cameo appearance by Miss Sparkle Johnson, whom you may know from her youtube channel and films or (if you live in New Orleans) from her hilarious television commercials. 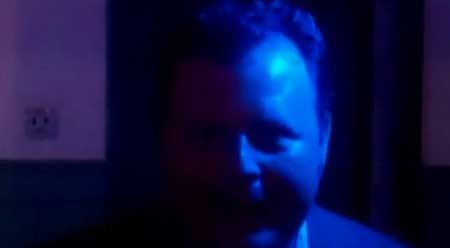 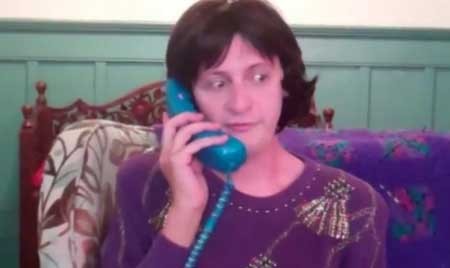 The supporting cast are also quite good. Many of them are friends and neighbors of the filmmaker and have never acted before. This is an honest-to-goodness total indie film, made for the love of the art. Don’t see many of those these days.

So on a scale of one to ten, ten being awesome, I’m giving this film 6 phobias. 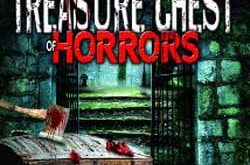