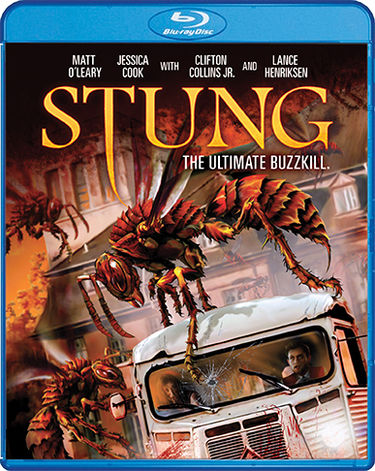 Have I mentioned how much I hate bees? I was swarmed by an underground hive when I was six, swelled up like the Michelin Boy for weeks. I learned I was allergic to bee venom that day and have been terrified of those stingy abominations ever since. I really hate bees.

That being said, there may a bit of bias as I review today’s film, STUNG. This is a horror/comedy, directed by Bennie Diez (his first feature-length film) and written by Adam Aresty (his first film EVER).

We have a (possibly) crazy old broad named Mrs. Perch (Eve Slatner) throwing her annual garden party to celebrate her husband’s death-aversary (I don’t know if that’s really a word, but you get it, right?). There is also her hunchback son Sydney (Clifton Collins, Jr.) who doesn’t seem to get out much. Sydney is a miserable Mama’s boy, both bound to and resentful of his dear mum.

On to the party, attended by politicians and debutantes, or at least what passes for such things in this rural ‘burg. We have good food, good times, and the musical stylings of Laurence (Daniele Rizzo) on the Hammond organ. Sounds like a great party!

Our invitation to this hullabaloo comes in the form of the catering company. Julia (Jessica Cook) has recently taken over full ownership of the company following her father’s death. She is so focused on making/keeping the business successful that she is completely oblivious to the attentions of her employee, Paul (Matt O’Leary). Paul likes Julia…A LOT. So much so that he puts up with her bossiness and borderline abuse on the job just to prove himself to her.

Ok, everyone with me so far?

Unfortunately, it all goes wrong. See, Mrs. Perch’s late husband was a pharmacist of questionable scruples, if you know what I mean. And when Madame expresses her dislike of how things are growing in the flower beds, Sydney knows just what to do – he mixes some of dad’s leftovers into the fertilizer and it has a strange effect on the wasps.

Apparently if they sting you, you turn into a giant wasp. Actually, more of a human/wasp hybrid. Once the swarm gets started, don’t get too attached to anybody. The deaths come fast and often. Ultimately, everyone at the party gets killed off almost immediately, leaving four characters to carry the rest of the film – Julia, Paul, Sydney, and the local Mayor (Lance Henrikson).

Let me just say that Lance Henrikson is brilliant. He can do no wrong as far as I’m concerned regardless, but he’s so wonderful in this. An alcoholic old war veteran with a lot of stories and wisdom, a big fish in a small pond that is all too aware of his relevant unimportance.

This film does a lot of things right in my opinion:

1) It does not waste any time at all getting to the good stuff. It jumps right into the story with gusto and really doesn’t slow down at all.

2) The story is set in the modern day, but all modern advances are taken out of play in a believable manner. Why not call 911 on a cell phone? Because the Victorian mansion Old Lady Perch lives in hasn’t been upgraded since 1950. No wi-fi…no cell service…they are totally on their own out there.

3) the giant wasp animatronics are absolutely brilliant. I honestly expected them to be cartoony and fake-as-hell looking. If one is going to make a giant insect film, one needs damn good looking giant insects.

Animatronics supervisor Josh Head gave us just that, and it’s not a surprise. His credits include THE HOST, STAR WARS:EPISODE 3, WHERE THE WILD THINGS ARE, and X-MEN ORIGINS:WOLVERINE. Mr. Head got mad skills, and they are put to good use on this film. I’m not sure if the giant wasps are 100 percent physiologically accurate, but they’re scary and nasty and close enough for me. 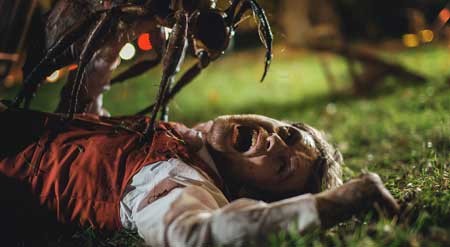 There is something timeless about the way this film reads to an audience. It felt like pride and Prejudice with monsters, or some weird mash-up betwen Dungeons & Dragons and Clue. Is it perfect? No, but there’s something really fun about it. The comedy was very subtle, at least I felt it was. I didn’t really have a good “laugh out loud” moment until the very end. Without giving anything away, the end of this film is just the bee’s knees (sorry…couldn’t resist that one).

On a scale of one to ten, ten being awesome, I’m giving this film 7 epi pens.

Stung is now available on bluray per Shout Factory