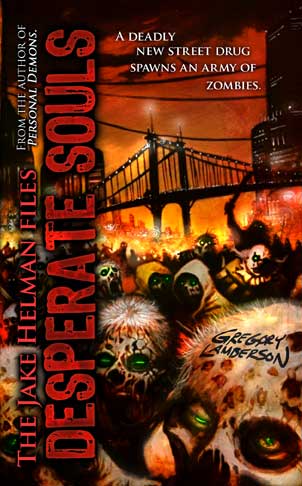 “This is my big, ongoing project,” says Lamberson, whose werewolf novel The Frenzy Way was published in June and whose new film SLIME CITY MASSACRE is currently playing on the film festival circuit, with a DVD release in the wings. “I originally wrote Personal Demons as a screenplay back in 1989, but the story was way too big for the kind of budget I’m able to raise as an indie filmmaker. I revisited the tale more than a decade letter, expanding its scope. A small press published the book as a limited edition hardcover in 2004, and as a small press trade paperback in 2005. I wanted to go to a series then, and started developing additional stories, but didn’t see any point in writing them until I had a mass market deal.”

When Medallion Press acquired the mass market rights to Lamberson’s second novel, Johnny Gruesome, the author immediately pitched the Jake Helman series. “Ali DeGray heads the horror line for Helen Rosburg, who owns the company, and Adam Mock, the president. All three of them loved the book, and Medallion published the mass market paperback version last year. Now they’ve committed to three additional books in the series, plus they co-produced SLIME CITY MASSACRE. We have a very unique author-publisher relationship, and I’m lucky to be with them.”

The Jake Helman Files mixes horror with other genres, such as science fiction, crime drama, and noir, bound together by large scale action sequences. In Personal Demons, fallen from grace ex-cop Jake Helman tangled with a billionaire genetics tycoon, a serial killer who stole the souls of his victims, and the Biblical Cain and Abel. Desperate Souls pits the reluctant hero against criminals who use a street drug called Black Magic to create an army of voodoo-style zombies, resulting in Helman’s one-man war on the undead in the streets of Manhattan.

“Jake is different from other characters who battle the supernatural because I make him suffer,” explains Lamberson. “When you have a continuing character in any series, readers know he isn’t going to die, and the character moves on to his next adventure. Jake endures severe emotional and physical trauma in each book, and he wears those scars forever. By the end of the series, he’s going to be a real mess.”

Lamberson has plotted six Jake Helman Files in total, but hopes the character will continue beyond that number. “Each novel is a self contained story, but there’s an overriding continuity, like on a serialized TV show, and by the end of the sixth book I’ll have told an epic horror story. But I’m already laying the groundwork for additional Files. I love this character, and want to punish him for a long time to come.”

Audible.com has acquired the audio book rights for Personal Demons and Desperate Souls, and on Saturday, September 11th, Medallion is hosting a unique “online, interactive book signing” for Desperate Souls. Readers who register for the event will communicate with Lamberson via webcam, chat room, or traditional email, and he’ll personalize a copy of the book to them, which Medallion will ship; purchase of the book is required as part of the registration process.

“We did a similar signing for Personal Demons last year,” Lamberson concludes. “It was a lot of fun, because people joined me from different time zones and countries, and I was able to communicate with them all at once. It’s one more cutting edge development in the publishing industry.”