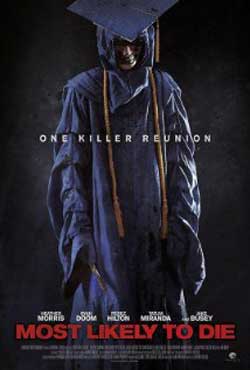 The night before their 10-year high school reunion, the pre-party takes a deadly turn when one-by-one, former classmates go missing and turn up dead according to their senior yearbook superlatives.

Ah, high school. Some of us have great memories, some have bad. Probably fair to say most have no interest in attending a high school reunion. Who wants to re-live all of that? But there is that lingering question that remains: just how did some of those people turn out? Successful, broke, committed, incarcerated? Killer?

Most Likely to Die delves into that very mystery. A few shots of the yearbook give us an idea of just who these classmates were. Our focus is on a group of them that are gathered for a little mini-reunion of their own the night before their official ten year high school reunion. And in true horror movie fashion, we have quite the eclectic group. You have the jock, the cheerleader, the class clown, etc. To classify them even further, there’s large pictures of them on the wall, straight from the yearbook, each with their most likely to. Most likely to eat anything, most likely to spike the punch, most likely to break hearts. Simple. And honestly, for horror movie characters, perfect.

A tiny disclosure, I love the splatter movies from the eighties. Campers, counselors, coeds, sorority sisters and high school kids. Mix them with a masked killer and I’m so there. It’s my favorite sub-genre of horror. So how does Most Likely To Die stack up?

Very well, I’m happy to report. Right off the bat it’s got great things going for it. First off, a strong cast. Good direction, good script, great special effects (read blood and gore). The only quibble I’d have is with the score. It’s not bad, but there were a few moments where I felt it was somewhat inappropriate in relation to the action on the screen. But trust me, it’s a minor quibble.

What matters is the plot, the kills, the overall fun. Check, check and check. Gaby, played by Heather Morris, arrives at a remote, large mansion for the party. Soon after the gang shows up, their only baggage being the ones they carry from their past. From early conversations there’s definitely hatchets to bury (sorry, bad humor). But someone isn’t exactly about to let bygones be bygones. But who?

Most Likely To Die starts off with a great opening scene and the pacing remains fantastic throughout. The movie clocks in at roughly eighty minutes, so there’s no time to waste. As mentioned above, characterizations are kept simple, at least in the beginning. I have to give credit to screenwriter Laura Brennan for adding on layers (not too much thankfully), occasionally revealing deeper emotions and secrets to what would otherwise be cardboard cutouts.

But let’s not kid ourselves. This isn’t some character study, thank god. We need some bodies to start piling up. No fear, there’s plenty of blood and guts and some wonderfully staged kills. All of the actors were perfectly cast, from our two leads, Heather Morris and Ryan Doom, to the lovely Tatum Miranda as Bella, the Italian model, right on down to Perez Hilton and Jake Busey.

All of the horror tropes are here, and what a relief to say that. Yes, you’ve seen these scenes plenty of times before, but when they’re done right, it only serves to reinforce what us horror fans already know: horror movies rock!

In the end, I would have to most likely…recommend seeing this one. IMDB right now has a scheduled release date of sometime in October 2015. And while I’m not sure if it will be in theaters, definitely catch it on rental. To be sure though, if you were thinking of attending your upcoming high school reunion, it’ll make you think twice.