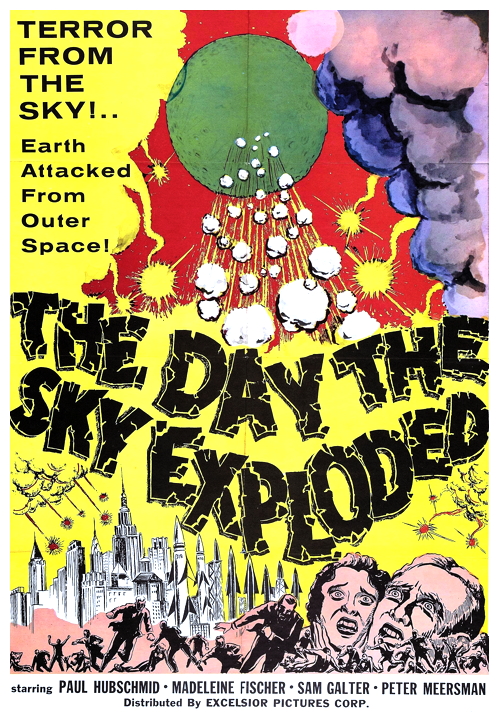 SYNOPSIS:
“An atomic rocket is launched on a manned moon mission, but one of the engines malfunctions. The rocket’s steering is broken. The pilot disengages the capsule and returns to Earth. The atomic booster, however, continues on, eventually crashing into and exploding in an asteroid belt. The explosion dislodges many asteroids from their orbits. They coalesce into one giant cluster and are heading for earth. As the cluster approaches earth it causes global scale disasters: tidal waves, wind, fire storms and earthquakes. One scientist loses his sanity in the crisis and disables the great computer needed to calculate all the firing data. He is stopped and the data provided. When there seems to be no reasonable hope that humans could eventually avoid the crash, scientists find that the moon will pass in front of the cluster so that the Earth will be shielded from most of it. However, a small part of the cluster is not shielded and goes towards the Earth. At this point, mankind’s only hope is to arm every missile on earth with a nuclear warhead and fire them all at the cluster.” (courtesy Wikipedia)

REVIEW:
I love a good old disaster movie, don’t you? You know the kind, an impending catastrophe as its primary plot, characters are introduced and tension builds as they witness the event. Disasters can include:

This week I wish to focus on the very first disaster movie to incorporate all three categories, first by accident when a nuclear rocket booster is lost in space, which then explodes near the asteroid belt, sending a shitload of papier-mache rocks hurtling right this way, threatening not just Italy but the entire Earth! Oh, did I mention this is an Italian film? Actually, it’s a French co-production starring German actors with English voices doing American and Australian accents, photographed by some of the best Italians in the business, but more about multi-cultural confusion later. 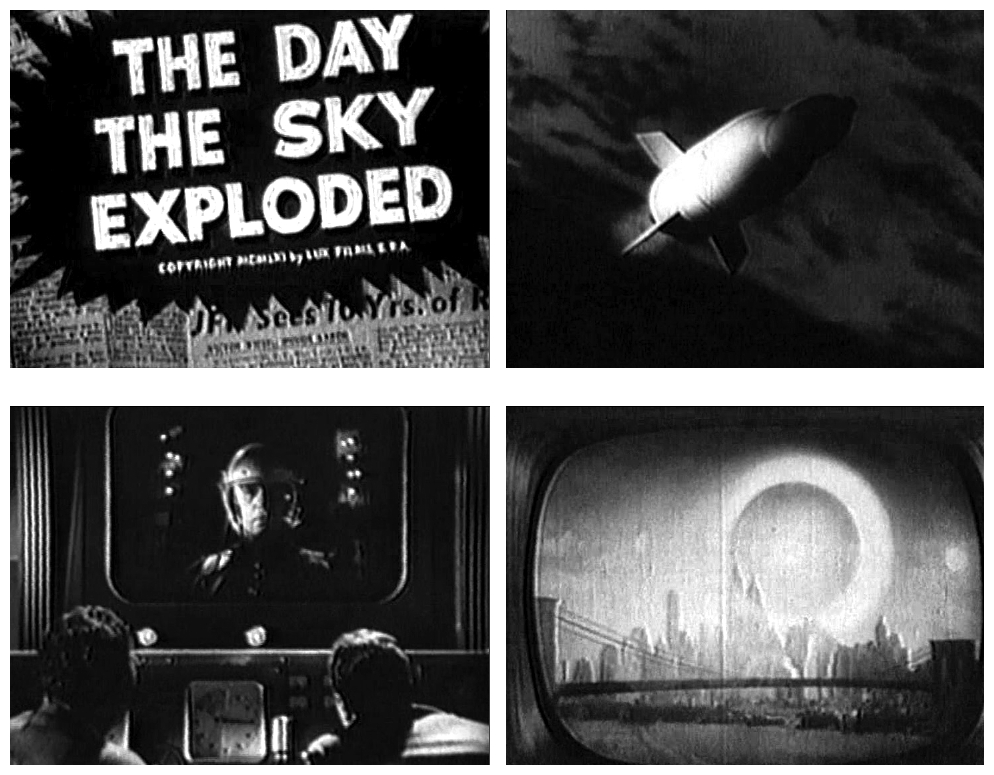 So start stocking your bomb-shelter with food and guns, or at least put a paper bag over your head and stand in a corner, as we patiently wait for The Day The Sky Exploded (1958)! Actually, the original Italian title translates as the slightly more accurate (if no more illuminating) Death Comes From Space. As I mentioned, it’s an Italian-French co-production, but the movie is often considered German due to the unusually high number of Germans involved (a bit like Fascism). Not only was the director Paolo Heusch from the Fatherland, but stars Paul Hubschmid and Eddie Arent had already found fame in a series of German crime movies based on the stories of Edgar Wallace. Talent may be a universal language but, unfortunately, no-one on this film could speak a word of it. Even so, it makes a serious attempt to tell a story and, let’s face it, it’s more coherent and less laughable than recent disaster films with giant budgets. 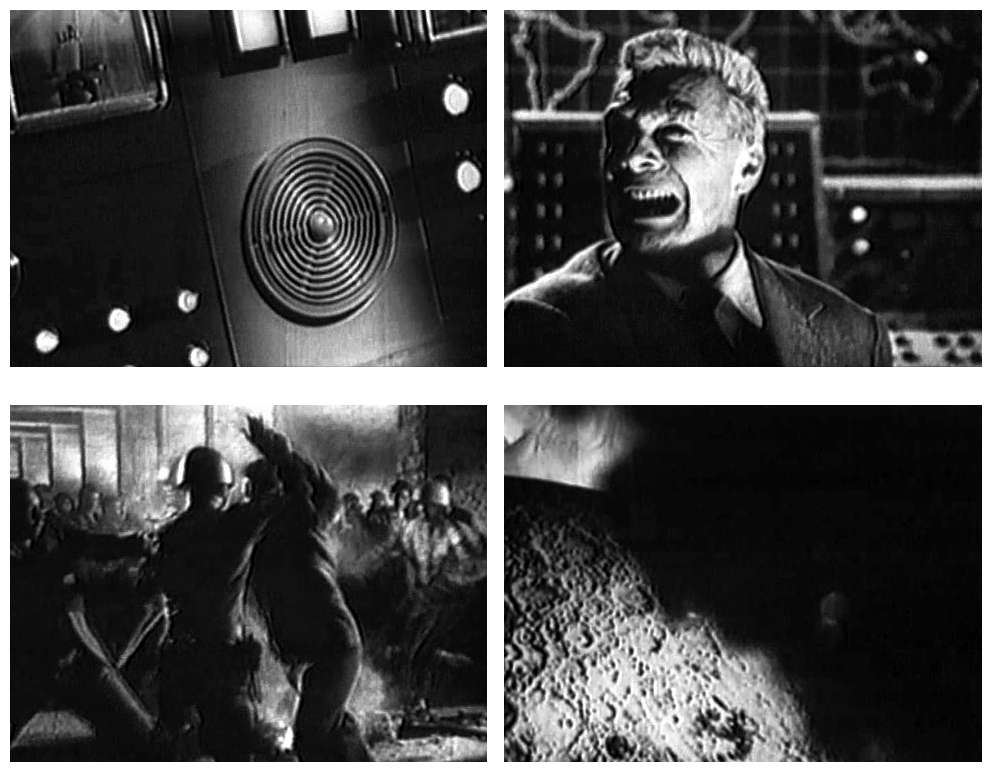 Despite its lack of funds, the film actually looks quite lush in some scenes, including the primary control room and the huge underground tunnels housing the evacuees who, in true Cecil B. DeMille style, inevitably run riot. There’s a good reason for this – not the riot, I mean the photography. Mario Bava was to become known as the King of Italian Horror, and I devoted an entire chapter of my book The Rise And Fall Of The Roman Vampire to this master cinematographer. Black Sunday (1960), Planet Of The Vampires (1965) and Danger Diabolik (1968) are some of his best. Some of his worst include Caltiki The Immortal Monster (1959), Hercules In The Haunted World (1961) and Doctor Goldfoot And The Girl Bombs (1966). Three years after its initial release, the rights to Death Comes From Space were pillaged by exploitation producer Samuel Z. Arkoff who promptly re-named it The Day The Sky Exploded and replaced the entire soundtrack with Gerry Anderson-style voice-overs and the spaciest sound effects he could find in the Public Domain. 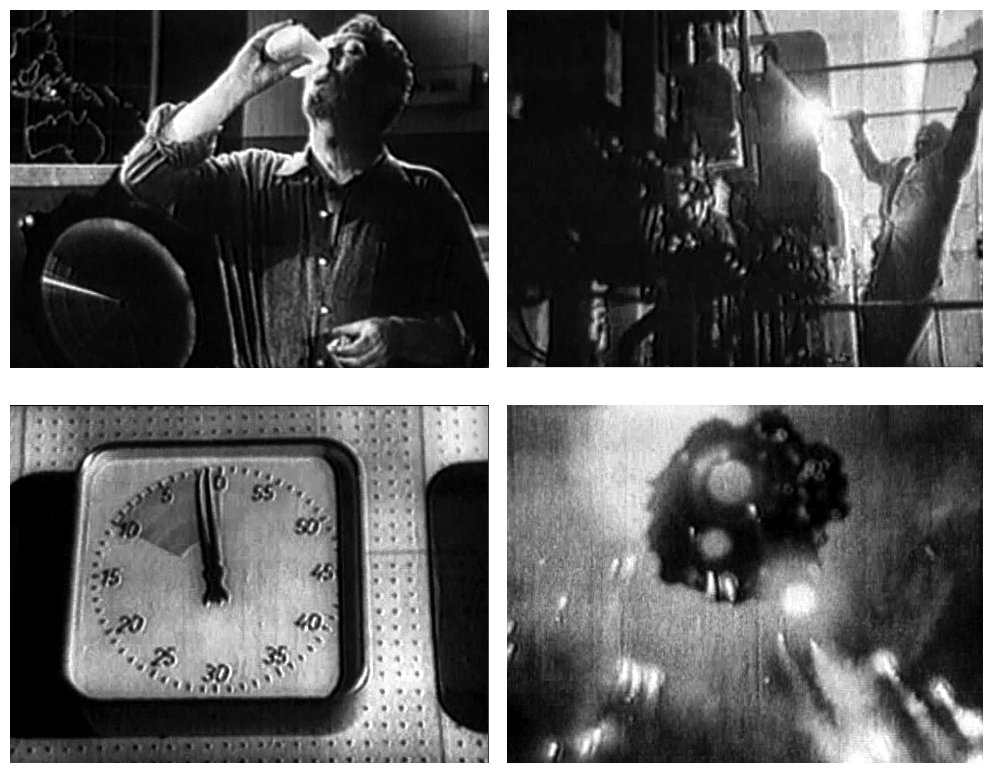 In fact during one catastrophic sequence, the sound of carnage is on a twelve-second loop, and you can hear the same mother cry out for her baby at least a dozen times. Indeed the end result comes across very much like an episode of Thunderbirds, complete with wooden acting, cardboard-cutout spaceships and some of the worst lip-sync ever. The most recognisable voice belongs to Shane Rimmer, who voices the lead role of stone-faced astronaut and all-round tall guy John McLaren. Rimmer was one of a handful of American actors who made a living appearing in British films and TV shows as ‘token Americans’ along with Ed Bishop, John Ratzenberger, Matt Frewer and Mac MacDonald. Since the seventies, a lot of so-called ‘Hollywood’ movies have actually been filmed in British studios such as Pinewood and, whenever a role came up that required a convincing American accent, the talents of Shane Rimmer were often called upon, from the very first Star Wars (1977) film to Batman Begins (2005). In fact he appears in the first three Superman films (1978, 1980, 1983) and half-a-dozen James Bond films, each time as a different character! 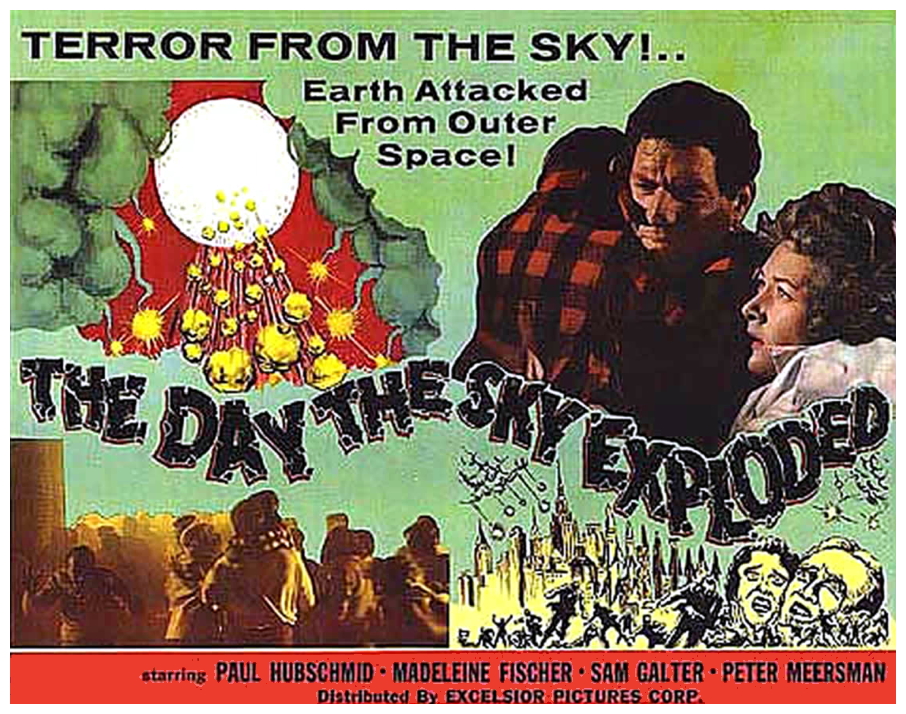 Speaking of which, you must be getting pretty tired of me by now…very tired indeed…now your eyelids are getting very heavy. Repeat after me: I will read every single review by Nigel Honeybone from now on. No, not me, you! You will read! Oh, it doesn’t matter. You will wake up again and remember nothing, the moment I click my fingers. Hmm. I seem to be having a small problem here. Um, I command you to watch The Day The Sky Exploded while I figure out how to un-hypnotise you. Ah, I think I’ve got it now. At the count of three, you will awaken. One. Two. Three! Welcome back. Well, wasn’t that mesmerising? The twist in the tale, stated loud and clear near the end there is that, “The safety of the human race is entrusted to the very weapons that were created for its own destruction.” 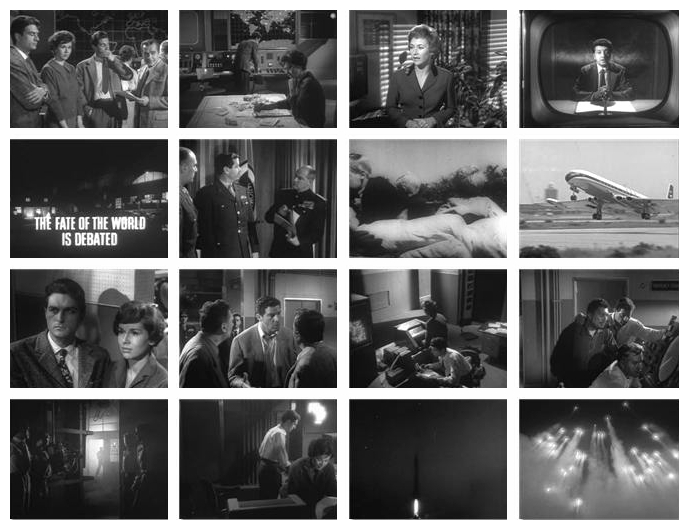 Perhaps the film should have been called How I Learned To Stop Worrying And Love The Bomb, beating my old friend Stanley Kubrick to the punch several years before the release of Doctor Stranglelove (1964), coincidentally featuring the aforementioned Shane Rimmer. Although The Day The Sky Exploded was obviously inspired by the success of George Pal‘s When Worlds Collide (1951) earlier that decade, it was nevertheless way ahead of its time in the disaster movie game, preceding not only the Irwin Allen-dominated seventies, but more recent asteroidal disasters such as Deep Impact (1998) and Armageddon (1998), which made a sound case for shooting Bruce Willis at a meteor. Speaking of which, I’m-a-geddin’ to the end of the review – get it? Yes, it’s come to this. Anyway, I’ll be back in seven days after I wrangle another Public Domain doggie from the Almost-Okay Copyright Corral and prepare it for next week’s barbecue on one of the few remaining websites that doesn’t involve any cooking whatsoever, so it’s a pretty silly metaphor for…Horror News! Toodles! 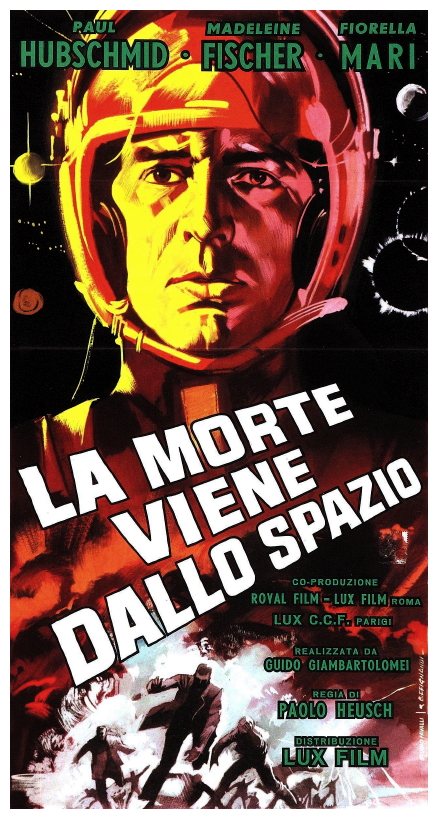