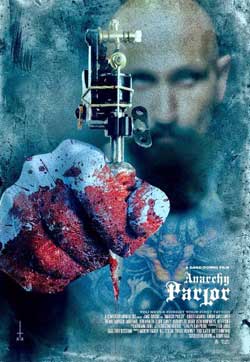 A mysterious nomad known as the “Artist” practices a dark art form passed down through the generations.

I’ve never really liked the phrase “torture p*rn” as it doesn’t sound like anything I’d like to watch and it’s certain not something I would shout from the rooftops when listing my favourite sub-genres of films It just doesn’t sound nice and isn’t something I would want to be associated with. Regardless of the unpleasant moniker that they have been gifted with, I have enjoyed some of the films that are classed as “torture p*rn”, such as Hostel and Martyrs and Saw (the first one). I feel there are sometimes more to them than the genre would suggest. However, some serve only to appeal to the gore-hounds (another phrase that I don’t especially like) with little in the way of story, character development or any other redeeming quality and thus move from one exploitative scene to the next. Some people hold very staunch views regarding the moral arguments that surround some of these films, I just don’t find them entertaining.

At the start of Devon Down and Kenny Gage’s Anarchy Parlour we are in very familiar territory as we are introduced to six backpackers; Jesse, Kevin, Brock, Amy, Kelly and Stephanie, who decide to stop in Lithuania for the sole purpose of drinking large quantities of alcohol and sex. At a party in a local mansion, the group meet a tattooed, blonde woman called Uta (Sara Fabel) who invites two of the travellers back to her backstreet tattoo parlour with the promise of sex for Brock (Ben Whalen) and a tattoo done by a “world famous” artist for Amy (Tiffany DeMarco). Things don’t exactly pan out as they expected as both Brock and Amy are drugged and eventually wake up strapped to beds. The artist (Robert LaSardo) then subjects them both to varying levels of torture while their friends try to locate them before it is too late.

The majority of the characters in Anarchy Parlour are really dislikeable, with the biggest culprit being Brock. Here is a guy who is completely led by his penis, is totally obnoxious and makes Hostel’s Óli look like the ultimate gentleman. The rest of the backpacking group are depicted stereotypically as Amy is the timid girl, Jesse the angry male, Stephanie and Kelly the promiscuous women and Kevin the nice guy. None of the younger stars, including Sara Fabel, display great acting skills. The problem with Uta is that she is just so over the top and full-on whenever she is in a scene that the character becomes less and less believable as the film goes on and ends up as laughable rather than shocking. However, all is not bad as Robert LaSardo plays the part of The Artist passionately and so creates a complex character that I struggled to hate. The Artist comes across to the audience as a thoughtful person who cares about his craft to the extent that he will do anything to meet the needs of his clients and genuinely cares about Amy even though she finds him more and more repugnant. Without Robert LaSardo’s input, Anarchy Parlour would have just been another crap horror film.

The camera work in the movie is handled excellently for a debut film and the colour palette of internal scenes show that David Fincher is an influence to Down and Gage. This is particularly apparent in the opening credits and in the tattoo parlour. There is a shot around the 40 minute mark that I thought was an excellent addition and instantly had me searching for the braille alphabet.  The film has some graphic scenes and the special effects are icky in a Brian Yuzna way rather than going for super realism. It is through the gory effects that Anarchy Parlour shows its darkly humorous side and this is an element that shines throughout the movie. One painful genital piercing scene towards the end of the film is a great example of the black comedy employed by the directors and one of the better scenes where Uta has centre stage.

Anarchy Parlour is a fun film filled with scenes that will have the audience cringing one second and then laughing the next. It is wholly predictable and generally badly acted but is nicely filmed, no-brainer entertainment that doesn’t outstay its welcome. As well as being entertained, viewers gain a little bit of education about the history of tattooing and learn that people definitely piss themselves when they are flayed!