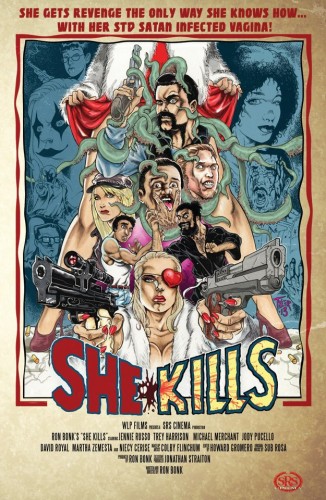 Ron Bonk has unleashed the latest trailer for his recently wrapped revenge horror movie “She Kills”. The movie, an homage to Ron’s favorite low budget movies of the 70’s, revolves around Sadie (Jennie Russo), who discovers her nether region holds strange powers during a sexual assault by a gang called “The Touchers”.

The gang is led by Dirk MaSalle (Trey Harrison), a super badass who’s used to getting what he wants from women – and if he doesn’t, he takes it by force. And he’s not afraid to smack his gang around when needed, which includes the envious Reggie (Michael Merchant), the slimy Poodle (Jody Pucello), the lumber muscle Blue (David Royal) and the gang play toy Beatrice (Martha Zemsta).

“She Kills” is an crazy, nonstop roller coaster ride of debauchery and crude humor. You can catch just a glimpse of the insanity in the link below.

“Sadie’s life is destroyed when a vicious gang called “The Touchers” targets her for their sadistic fantasies after witnessing her sexy but innocent naked frolicking in a nearby field. On her wedding night they attack her and her husband Edward, brutalizing both of them. But during the attack the virgin bride discovers a dangerous secret about her body – she is cursed with the legendary “Fire Crotch”, a condition where Satan has laid claim to her vagina. After visiting her fortune teller friend Casparella, a space exorcism is attempted on her meat flaps, but it only ends up unlocking secret hidden powers inside her. Her hatchet wound becomes lethal, her most deadly weapon in her thirst for revenge against The Touchers and her fight against lustful men everywhere!” 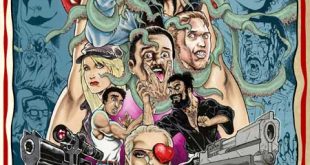