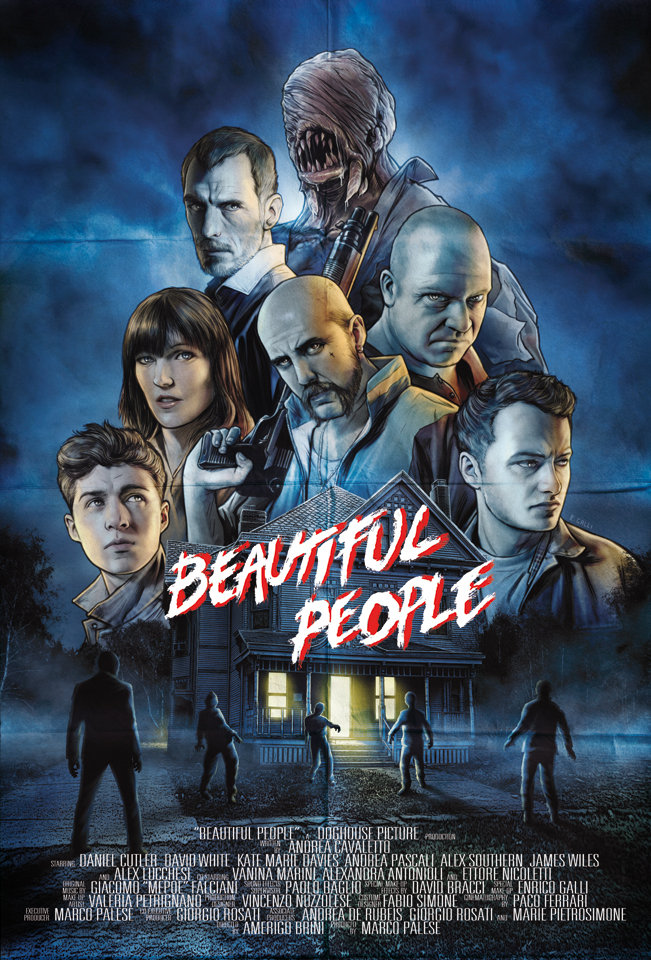 In a mansion in the woods, the peaceful life of a medical scientist and his family is upset by a three masked men raid. During an endless night of terror and violence, the unthinkable happens: the house is invaded by inhuman monsters. Fear will unveil the true nature of each character, forcing them to wonder…”Who is the real monster?”

This film opens with a scene of a couple making love, but it isn’t what it seems to be because suddenly the man turns his partner over on her stomach and apologizes for what he’s about to do. They’re actually a married couple who are being forced to have sex in front of their teenage daughter by a psychotic gang of home invaders. It gets even uglier as the leader of the gang verbally abuses the entire family as the physical abuse continues. It all ends with a bloodbath in which the family is mercilessly slaughtered. But then the film cuts suddenly to a bloodied woman being kept in a basement cell of some sort. We only get to see her for a few seconds though, because she’s suddenly set upon by a flesh hungry zombie and ripped to shreds!

Ladies and Gentlemen, welcome to a movie called Beautiful People. 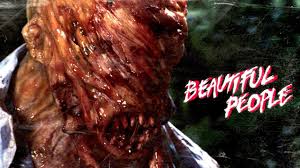 After the credit sequence, the film cuts to a family of four happily getting ready for dinner. What we, the audience don’t know yet is that the father is the scientist that’s experimenting with those zombies in his basement (his family doesn’t know either). And wouldn’t you know it? The next family the group of psychos target for annihilation just happens to be this one. Once the gang break in, they systematically start to break down the family with threats of violence and rape. But slowly, the gang begins to realize that all is not as it seems in the house, and eventually the things in the basement are freed. And they’re very hungry.

The first 45 minutes of Beautiful People focus mainly on the family and the unsavory situation they’re in. It reminded me a lot of a Spanish film called Kidnapped aka Secuestrados (2010), which was a really brutal crime drama with a surprise ending that felt like a kick to my gut on my first viewing of it. Beautiful People is an Italian production, but all the dialogue is in English. The cast is made up of actors of varying degrees of skill, but in the end Beautiful People isn’t looking to impress anyone with the featured actors. The story is the thing here, and it is one weird f*cking story. The tonal shifts here, from kidnap drama to out & out horror film might feel jarring at first, but with a running time of just over 70 minutes, the film doesn’t wear out its welcome. 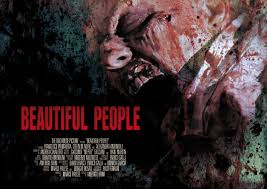 The gang is made up of three people. Nibbio (Danny Cutler), who likes to tell people what’s going to happen to them beforehand. His younger brother, Brett (Alex Southern), who seems very apprehensive about what he’s doing, but still records the gang’s exploits to video for posterity, and Testamento (Alex Lucchesi), who basically does (and enjoys) all of the really dirty work. The family (John & Elena Pontecorvo) are played by David White & Kate Marie Davies, and although they have problems maintaining their Italian accents (it all takes place in Italy), they essay their roles well. They’re certainly up for the nudity & violence, which is copious and extremely gory.

I can’t go into details as to why the doctor is experimenting with creatures that appear to be zombies, but the film does explain it all pretty succinctly. Happily, the makeup FX (by David Bracci, Alessandro Catalano & Enrico Galli) are convincingly gross. There doesn’t seem to be any CGI involved here either, so this is the rare genre feature that does it the old fashioned way, with conventional makeup FX. Written and directed by first time helmer Brini Amerigo (with additional scripting from Andrea Cavaletto & Marco Palese), Beautiful People plays out like a severely demented version of Straw Dogs (1971), with the Pontecorvo’s defending themselves against the home invaders using what they have at their immediate disposal. Unluckily for the intruders, what they have are a bunch of flesh hungry creatures. But the family puts themselves at risk as well since the creatures have no allegiance to anything save their hunger. The tagline for the film asks “Who are the real monsters?“, and the film does posit that question as nearly everyone of the principals do something really scuzzy for varying reasons. But I can’t say that I thought much about it after the film was over, I was too busy trying to figure out what the hell it was I had just watched. In combining several genres, Beautiful People looks to upend a lot of the standard tropes that are, by now, familiar to all of us. It doesn’t always succeed, but it deserves kudos for the attempt. 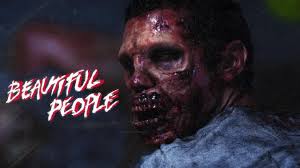 As I mentioned earlier, Beautiful People is indeed violent. If any of you are offended by misogyny, rape & graphic violence, this ain’t for you. Some of it left a greasy taste in my throat, but I can’t say that I wasn’t fascinated with the proceedings, and as the film continued I was excited to see where it would all end. Once the creatures are introduced, it goes so completely off the rails that it became something I had to see through to the end – despite the inherent ugliness of it all. But at just over 70 minutes long, it’s all over in a flash.

Beautiful People is an ugly film, with ugly people in a ugly scenario doing ugly things to each other. But it makes no apologies for that, indeed it seems to revel in all of the madness – and I respect that. There are moments where I found myself repulsed by what was happening on screen, but I couldn’t turn away from any of it either. The central premise is so unique that I had to see it through to the finale, it’s all a bit ridiculous (actually very ridiculous), but it’s engrossing all the same. As it stands, Beautiful People is quite unique, and in an era of unnecessary remakes and endless takes on zombies – that’s commendable. The subject matter ain’t for everyone (some of you will be offended by it), but it’s well worth a watch for those of you with iron clad stomachs & open minds.