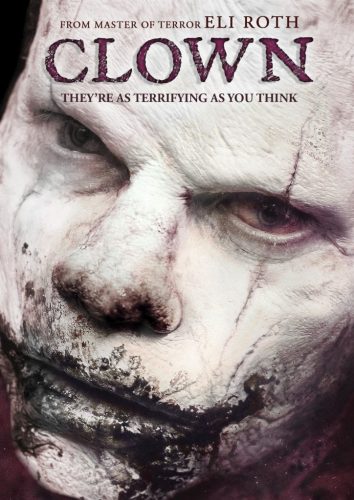 A loving father finds a clown suit for his son’s birthday party, only to realize the suit is part of an evil curse that turns its wearer into a killer.

Coulrophobia: An abnormal fear of clowns.

I, for one have never suffered from this particular phobia, but it seems that most of everyone else does to some degree. Hollywood has assailed us with scary clowns quite a bit over the years, but only a selected few really stand out (for me anyway). The alien clowns from Killer Klowns From Outer Space (1988) were dastardly but humorously so. The clown puppet from Poltergeist (1982) had a maniacally devious smile to go along with those long arms of his, but the scariest cinematic clown of all time has to be Pennywise from Stephen King’s It, the very personification of evil – wrapped up in a clown suit. Tim Curry left an indelible mark on millions of people’s psyches as he intoned “We all float down here…”. It still gives me a chill, and I remind you – I’m not scared of clowns. 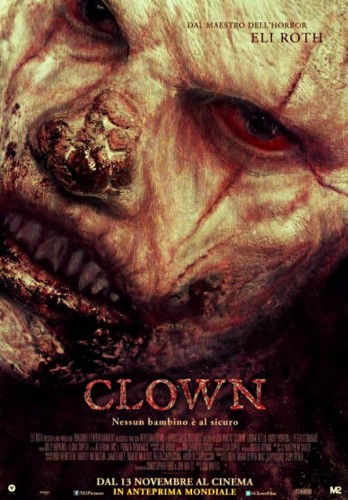 Co Written (with Christopher D. Ford) and directed by Jon Watts, Clown is the latest attempt to give those of us that suffer from coulrophobia another reason to be scared of the circus. With Eli Roth’s name above the title (he came on as a producer), and a pretty disturbing trailer attached to it, Clown looked like the next big thing in the horror world. But while it does have a terrifically macabre plot working in its favor, it feels like it favors familial drama over out and out frights. For the record, this isn’t too good of an idea if you’re making a horror film.

Andy Powers plays Kent, a devoted family man that’s busy trying to get his day’s work done before his son’s birthday party. Once he’s ready to get to the party, he gets a call from his wife, Meg (Laura Allen), telling him that the company that they rented a clown from has accidentally double booked him, and he won’t be able to make the party. Luckily, Kent finds a old clown outfit (wig and all), in a box inside of the house he’s currently trying to sell. So he puts it on and saves the day for his son’s big party. 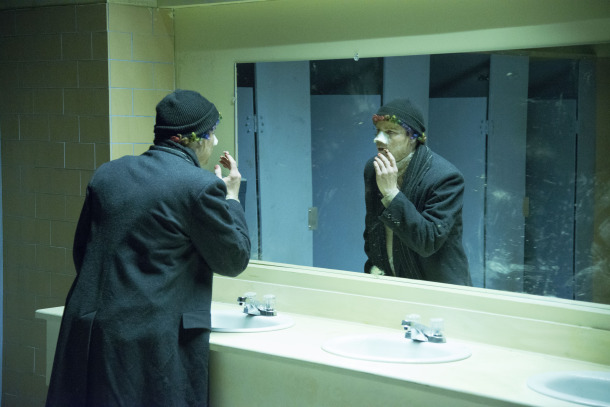 But afterwards, he realizes that it won’t come off…

That’s right, it just won’t come off at all. The clown outfit seems adhered to his body, the big red clown nose is staying put, the makeup doesn’t wash off completely, and even the hair on his head seems to have been replaced by the clown wig . He’s literally become a clown, and goes to some pretty amazing extremes to try and get the suit off (the scenes in which he’s trying to remove the clown nose are particularly cringe inducing).

Exactly why he’s literally trapped in the outfit has a lot to do with the history of clowns in general, and why they weren’t always regarded as happy, mirthful creatures. He manages to get in contact with someone named Karlsson (Peter Stomare), who informs Kent of the danger he’s in now that he’s wearing the suit. Unfortunately for Kent, Karlsson’s plan is to decapitate him. Because he’s now wearing the skin and hair of a demon, and decapitation is the only way to stop the demon from taking over Kent’s body.

Powers does a nice job of going from a happy go lucky dad who’s only looking to throw a great party for his son into a angry demon who has a hunger for kids. The change is one that doesn’t happen immediately, it takes place slowly over the first half of the film. Most of the physical changes to Kent are subtle, after all he is becoming a clown, but they look hellaciously painful and some deftly placed sound effects give the transformation a bit more heft. Laura Allen does a good job playing Kent’s wife as well, but she seemed a bit detached from the story at times, as if her mind was elsewhere. Stomare is always a treat to watch in anything he appears in, and he’s great here as well. The rest of the cast is fine, but they’re part of the trouble I ultimately had with Clown. 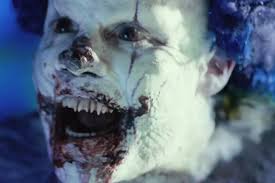 Y’see, Clown presents itself as an out & out horror film, but it really isn’t. Don’t get me wrong, it certainly has its fill of demons, broken bones & gore, but it spends a lot of its running time dealing with the effects his slow transformation has on his family. Not that there’s anything wrong with some drama to go along with the horror, but Clown really lays it on thick, and the horror suffers more than a bit for it. I was expecting a lot more clown carnage than I received, which I found mildly disappointing. But when it delivers, Clown delivers in spades. There are scenes of genuine tension mixed in with the drama & the horror, but there aren’t enough of them for my taste (especially when the scenes in question are so damned good). The script tosses in a minor dollop of humor as well (Kent’s blood & saliva are rainbow colored for example), but due to its central conceit there should’ve been more humor here.

The gore in the film isn’t exactly plentiful, but it is effectively gruesome once it arrives. There actually isn’t too much gore to speak of until the final third of the film anyway. Luckily (for me anyway since I’m not crazy about ’em), there are a few fatalities involving children. Now before you start laying into me for advocating the murder of kids, let me set the record straight: I have nothing against the little monsters, I just think they always get a pass when it comes to the majority of horror movies. I say that a kid should die a horrible death in a horror movie every once in awhile.

What? Just ‘cuz they’re kids means they always have to escape the maniac’s machete? What’a the big deal? Knock off a kid and a couple of dogs (just like kids, dogs in the movies usually escape the most dire of circumstances) every so often in a movie. I ask, what’s it gonna hurt to have a kid get eaten by Godzilla, or lacerated by some ax wielding psycho? Personally, when I see something like that I get pumped, because it tells me that the director has a set of balls on him (or her?). Kids do get it in Clown, and while I really enjoyed seeing the little monsters get slaughtered, there could’ve been a few more added to Kent’s final tally. One of the final scenes involves Kent and a few kids in one of those indoor playgrounds you see popping up everywhere. It’s by far the most effective, and thrilling sequence in the film. The one place where all of the elements that were introduced come together in a stylishly shot, creepy & claustrophobic scene. 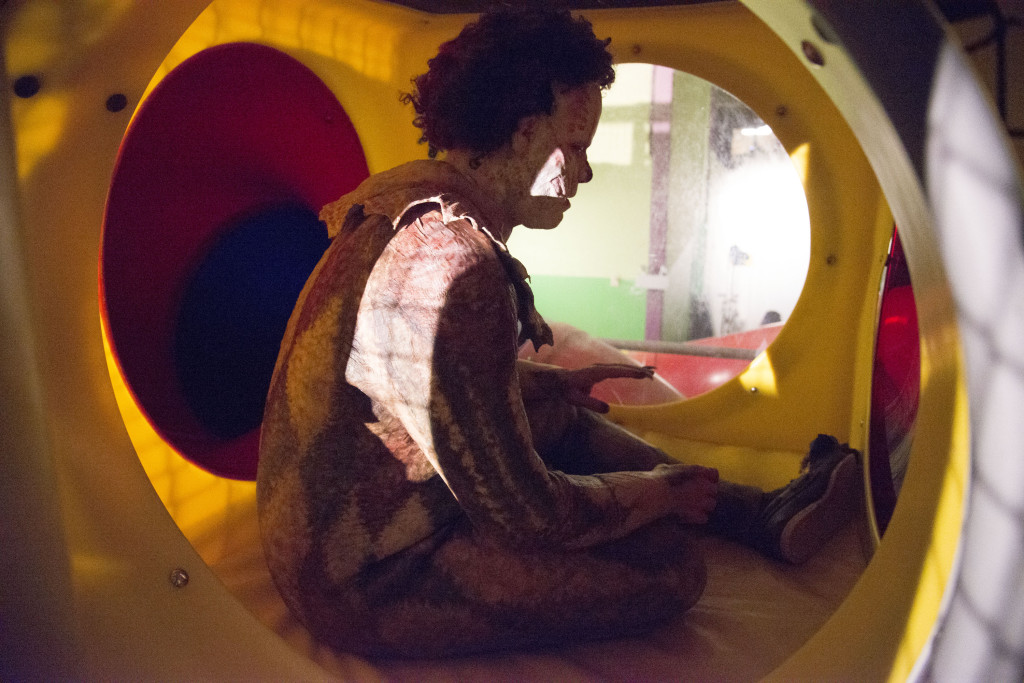 Clown has a great idea propelling it, but the script doesn’t take advantage of the inherent scares as much as it should. When Clown should be racing towards its (predictable) finale, it’s only jogging there at a lackadaisical pace. Good performances help soften the blow, but the decided lack of anything particularly horrible for the first half of it severely hamper the film. There are some truly memorable moments to be found here in Clown, but they’re few & far between for the most part. And that’s a shame, because Clown had the makings of a really good horror movie.

Clown was originally presented a few years back as a faux trailer that eventually caught Roth’s eye, hence his participation in the film. But the trailer feels a lot more entertaining than the full feature. It’s as if Watts & Ford overthought the whole process of making their little short a full fledged feature. They hold back on the grue when they should be flinging it all over the place. It’s almost like they didn’t wanna offend someone, when the film should really be working overtime to offend on some level. It’s about a killer clown demon! Cut him some slack & let him loose! But overall, it’s still an enjoyable way to waste 90 minutes or so, if you keep your expectations low.

Clown is now available on bluray per Anchor Bay