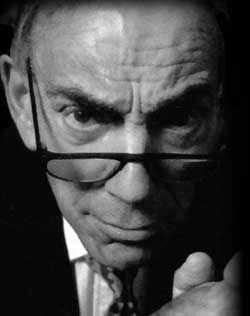 Known as “The Godfather of Gore, Herschell Gordon Lewis is a legend and he took time to speak with HorrorNews.Net for an interview. His latest book is, “Internet Marketing Tips, Tricks and Tactics.” He is an Actor, Director and Writer who is from Pittsburgh, PA. Some of his most memorable films include: TWO THOUSAND MANIACS (1964), BLOOD FEAST (1963) and Mr. Lewis is a pioneer who made it possible for many Directors and writers who may not have had the opportunity to release the type of work in the world of Horror.

Mr. Lewis, you are an Icon among Icons in the Horror world, how do you feel knowing the work you have made since the beginning is still loved by present and new fans?

Mr. Lewis: Few results have given me such satisfaction, because when I first attacked what was then a taboo subject, critics and competitors flung huge chunks of rhetorical dung at me.

Could you please elaborate on the new project you are working on?

Mr. Lewis: “Herschell Gordon Lewis’s BloodMania” is being cut, with finished product due by mid-summer 2015. I’m hoping to shoot a new epic blending gore and humor this year, but progress is dragging. That may be because I no longer will self-finance.

You have written several books, why you decided to write, INTERNET MARKETING: Tips, Tricks and Tactics. What can we expect from the book?

Mr. Lewis I find it laughable that every practitioner in the shadowy online universe is an “expert” — self-proclaimed, of course. This little book cuts through the b.s. and concentrates on results as its subject.

How do you feel about social media?

Mr. Lewis: In my opinion social media haven’t matured as professional force-communication weapons … and they may never, because two-way equalized conversations are at best second-level weaponry.

You have done writing, acting, producing, soundtrack credit, and composer? What is your favorite role behind the scenes to take on?

Mr. Lewis: Every element has its own unique appeal. I have the most fun as an actor … and the most satisfaction as a director.

Your first film is listed as THE ADVENTURES OF LUCKY PIERRE (1961) what made you want to become an Actor/Writer/Entertainer?

Mr. Lewis: I was a partner in a commercial film studio, and the motivation was as simple as visualizing a way to maximize use of the equipment.

Are there any current Directors whose work you enjoy?

Mr. Lewis: I don’t see any I’d want to emulate. The “top names” use CGI so lavishly I wonder how they can retain the title “director.”If any studio offered me a directorial assignment on the Peter Jackson level, I’d accept in a flash.

What are some of your favorite Horror/ non Horror films?

Mr. Lewis: Unfair question … but that’s my fault more than yours. Every time I have the insane urge to revisit a movie I liked, the appeal seems to have been washed out of it. Time isn’t kind to horror films.

How do you feel when you attend a convention and meet the fans?

Mr. Lewis: Those experiences are the happiest of my entire professional existence.

What has been the most challenging project you have taken on?

Mr. Lewis: Because I’m always careful to avoid exceeding technical limits, I don’t recognize the word “challenge.”Some individual scenes are more difficult than others, but that’s a decision I always have the option to avoid.

The film BLOOD FEAST changed the world of Horror in so many ways? Did you think it would have that type of affect?

Mr. Lewis: I knew it was unique, but I had no notion it would be so heavily followed.

What if your favorite book or film that you have done?

Do you have any advice for upcoming talent: writers, Directors, Producers, Actors?

Mr. Lewis: Yes. Don’t cast your family or close friends. Leave your “I’m a genius” attitude at the door. Pretend your function is to assure entertainment. After a while, pretense becomes actuality.

Thank you and it is such an honor. You are one of my Heroes! I had the honor to meet you and you were wonderful! Thank you from my HEART!!!!

Mr. Lewis: I don’t know what I did to impress you, but whatever it was, I’m glad I did. You’ve made my day.
Herschell