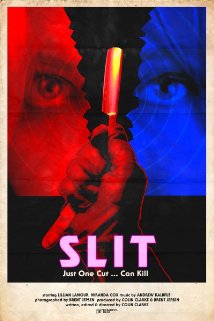 Passion and murder are in store for two party girls whose steamy sexual encounter turns bloody when a black-gloved killer follows them home.

Today we have a short film from Daredevil Films called SLIT, written and directed by Colin Clarke.

Our story follows two hot young party girls at the end of a night of bar crawling. They’ve been scoring drinks from men all night, but now that the night is over, they are going home…with each other.

A stranger in black is following them back to their love nest. One of the many men they scammed for drinks, angry that he didn’t get anything in return? A random pervert, looking for a cheap voyeuristic thrill? Maybe something much, much worse?

This film is visually really cool. It definately has a Giallo vibe, and considering the filmmaker gives special thanks to Dario Argento and Brian DePalma in the credits, it’s obvious where the filmmaker’s inspiration came from.

I love the lighting on this film. Pay close attention to that, actually. The lighting is actually telling it’s own story. I can’t say much more about that without spoiling the film for you.

Writer/director Colin Clarke has a few other short films to his credit – Frankenstein vs the Wolfman in 3D being one of them. He seems to have a good sense of keeping the story tightly focused, while telling a wider tale at the same time.

A very small cast in this film. Our two main characters are played by Lillian Lamour and Miranda Cox. Ms. Cox only has one other short film to her credit. Ms. Lamour, on the other hand, has quite a long list of shorts, feature films, and television appearances.

I think my only real complaint is the bedroom sequence between our two lovers goes on a bit too long for my taste. Yes, it is very stylized, and nothing really “naughty” is seen on screen. I’m far from a prude, but it went on long enough that I actually got bored. I just kept wishing the story would move forward.

All told, this was pretty good. So many subtle things going on that require a second viewing to really comprehend. The ending kind of blew my mind, to be honest. Definately worth watching.

So using my special “short scale” of one to five, five being awesome, I’m giving this film 4 drinks. 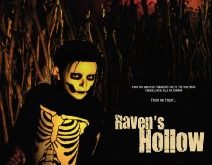