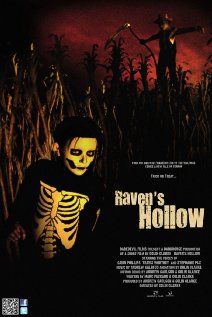 Billy; his sister, Lisa; and her boyfriend, Mike, spend Halloween at the drive-in after trick or treating. When Billy threatens to walk home through a dark cornfield, Mike tells him a legend of Old Farmer Blood, who is said to have seeded his field with the blood of murder victims. When Billy disbelieves, Mike leads the trio into a nightmare of unrelenting terror.

Lisa and her boyfriend probably need to pay better attention to Billy. As the 2 of them try and make the best of their date, Billy proclaims that he is ready to go home. Even as the horror film they came to see plays on, it soon becomes apparent that the 3 of them will be plunged into a horror tale of their own.

Billy content to walk home is soon joined by his sister and boyfriend who proceed to play tricks on him. We are told of the legend of Blood field as the horror of this short begins.

Raven’s Hollow is an 11 minute short film presented in full CGI animation. The piece was directed by Colin Clarke and is reported to have been created purely with desktop software. The film is a co-production between Daredevil Films and Darkhouse Productions using 2 styles of animation in its production.

Raven’s Hollow is a fun piece that tackles me back to some of the old scare crows haunts I used to watch. You might even say a tip of the hat to “Jeeper’s Creepers” for that matter. While the animation is  bit jumpy at times its the story that sells this piece. It’s worth noting the model making was really well done for an micro budget creation. Haunting drones and eerie tones provide the harrowing background score ambience pushing the tale into a impressive effort full of suspense and Halloween paranoia. it’s a simple story that makes great use of off the table tools and well thought out perspectives. Dare i even say that Lisa was hot for an animation character?

I think many will find this piece to be fun and haunting like it’s intended. While many of us may never see a real scarecrow, we can suspend disbelief into thinking that some of them are diabolical in origin. Billy found out that some tales are in fact based on real occurrences. “Raven’s Hollow” makes for a great bedtime story for children who wander off too quickly. 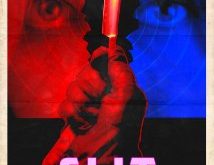