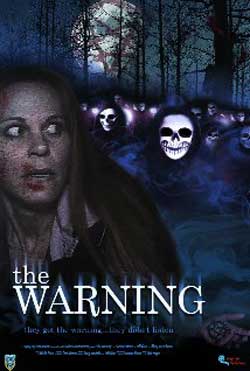 Determined to get ahead in the competitive world of TV journalism, a woman investigates a local legend of people vanishing at the hands of a satanic cult but finds that she herself becomes the hunted.

The air of familiarity hangs heavy over The Warning; a low budget found footage film from director Dirk Hagen (Wheelmen). Now, I know what you’re thinking. You’re thinking this is an accusation that can often be thrown at entries in the genre. Often it can be done in the same jovial manner one would mock a friend or long lost Aunt. There is no joking here, The Warning is very much a case of been there done that.

The film stars Summer Moore, who also wrote the script, as Taylor Skye; the archetypal tenacious TV anchor with a helluva lot of chutzpah. Taylor is determined to record a pilot for her own paranormal TV show and finds fertile ground she returns to her old town to debunk tales of Satanism that have run rife there since she was a kid. To achieve her ends, she ropes in her old high school buddies, Angel (Tiffany Joy Williams) and Brad (Jeff Allen). Angel is a wide-eyed believer in all things paranormal and paranoid. She hugs people who claim to be alien abductees and takes the brunt of Taylor’s aggression. Brad… Well, Brad is a man who wears a shirt and has teeth and hair. There’s probably more to him than that, but it didn’t quite make it on screen. Meanwhile, there’s something happening in the woods and the rumors are brewing that the world is coming to an end.

Despite the promise of boogedy-boo and devilry shenanigans in the woods, The Warning is a thoroughly derivative piece of film making. Don’t believe me? Let’s boil it down to its very essence. 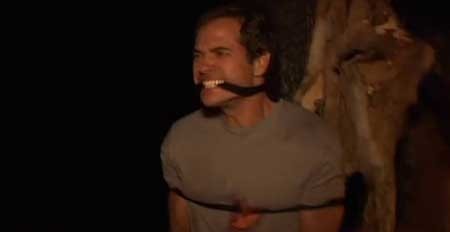 The Warning is the tale of three people investigating the urban legend of a small sleepy town as apart of a documentary, who decide to go into the woods to see if anything truly goes bump in the night. They get lost, they get angry at each other, ominous signs suggest they should turn back and so on. Yes, we’re so far into Blair Witch territory, we’ve practically found Joshua.

All the beats are there from the 1999 classic from interviewing the locals, mocking the legends they’ve told, hearing strange noises in the woods and we even get up close and personal with Taylor as she replicates Heather’s snotty monologue in the final minutes of Blair Witch. If an unseen assailant had struck down Taylor in the last few minutes of The Warning, I would not have been surprised.

There is nothing fresh or exciting here to make The Warning worth recommending. Which makes me feel like I’m kicking a puppy whilst it’s back is turned pulling a grandma from a burning house. As even though The Warning suffers from issues of performances, pacing and originality, it’s evident that everyone on board is having a lot fun making the film. From the faux-satanic scribblings in the woods, to the creepy guy staring at our heroes from a distance whilst performing a fabulous pout, it seems that The Warning wants to be a party movie. The kind of party that will give you a few scares, a few laughs and then pack you of home with a smile on your face and the promise of friendships to come.

However, none of that fun can be found whilst actually watching The Warning. It’s such a slog to get through it feels like the party ended a long, long time ago and you just really want to get friends out of the house so you can suffer through your hangover with a box set of House of Cards. 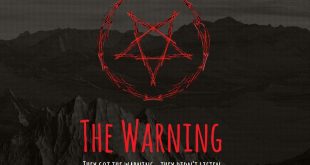