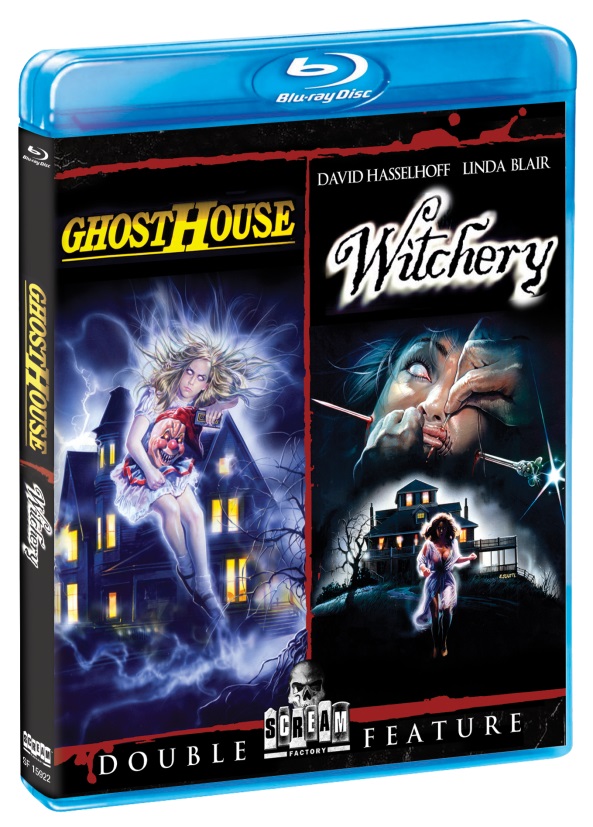 Clown dolls. Witches. Hasselhoff. What more could you want? Prepare yourself for one of the most bizarre double bills imaginable with Ghosthouse and Witchery! Released in Italy as part of the infamous La Casa series, these two highly unusual horror films come to Blu-ray on June 30, 2015 from Scream Factory.

Your tour of terror begins with Ghosthouse, in which a group of visitors to a seemingly-deserted home find themselves tormented by demonic spirits – including one particularly freaky little girl and her creepy clown companion. Soon, our hapless heroes find themselves powerless to conquer the evil of the Ghosthouse – where death holds the mortgage and if you move in… there’ll be Hell to pay!

Then, a new address brings new frights as the immortal David Hasselhoff and The Exorcist’s Linda Blair turn up the terror in Witchery. When a terrible storm leaves a motley assortment of people stranded on an island resort, they soon find they have more to worry about than not packing rain gear! A horrible witch unleashes her wrath on the unwanted visitors – and no one is safe from her unquenchable thirst for death!

Ghosthouse. Witchery. A duplex of doom, brought to you on Blu-ray from Shout! Factory.