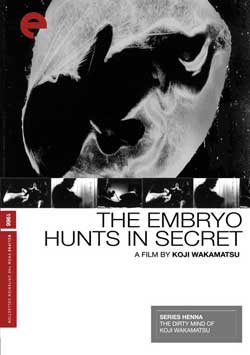 The Embryo Hunts In Secret, released in July 1966, is the first film made by Japanese director Kōji Wakamatsu independently of any movie studio

There are folks who can make nasty, sleazy movies, and there are folks who can make artsy movies, but rare is it that you can find a director who can make a movie that falls comfortable into both categories. Enter Japanese director Koji Wakamatsu. In 1966, Wakamatsu, along with writer Masao Adachi (a.k.a. Yoshiaki Otani) got together to create a movie that is often considered one of the precursors to the Pinku eiga film movement – The Embryo Hunts in Secret (the two would go on to work together often, also collaborating on Go, Go, Second Time Virgin and Violated Angels).

The premise of this film is quite simple, but that by no means diminishes its power. A young girl named Yuka (Miharu Shima) is convinced by her manager (Hatsuo Yamaya) to go home with him. We see them making out in his car while the rain pours down outside, and as things start to get heated, she asks if they can continue inside in his apartment. When they go inside, something seems off. The apartment is mostly empty, just a few things here and there. They make it to the bed, get undressed, and just as things really start getting hot, he starts asking her how many men she has been with, and if it’s always just like this. He leaves her in bed, comes back with a sleeping pill, which she takes. And then things gets bad, and the manager’s issues take charge of him.

Apparently, the man had been left by his wife, as we see in a series of flashbacks that build throughout the movie. He also seems to have some family issues, a bit of an Oedipal complex that we also see through a series of flashbacks continuing throughout the movie (as well as his flip-flopping from sadistic abuser to groveling, crying sad sack). The problem is, just as we start to maybe feel for him, he shows us that we were wrong to do so, whipping Yuka and hitting her, calling her name after name, cutting her clothing with razor blades, tying her up and telling her how she is just like a dog. He breaks her down, eventually walking her around by a leash on all fours, making her show good behavior before receiving a sip of water or a scrap of his leftover food. His treatment of her is disturbing, to say the least. And this is pretty much the rest of the movie, give or take.

Now, there are lots of movies nowadays that attempt this, a single set-up, a single location, and a progressing series of tortures and abuse that lasts nearly the entire running time. And you know what? Most of these movies are horrible (I said most). What makes The Embryo Hunts in Secret stand out is the technique and the style the director uses to show us this simple series of unfortunate events. Wakamatsu employs complete silence while beatings occur to make them seem even more severe than if there were constant blood-curdling screams. At times, the flashbacks meld with the story to juxtapose what we are seeing with what has happened previously. And there are a couple scenes where what is reality blends with what is going on in one of the characters’ heads, taking the story one way before a drastic u-turn brings us a completely different way when we snap back to the present. It all looks so good, and yet on paper is the equivalent of a torture film.

If at first you find yourself confused with the story and why things are happening, fear not – you’ll get an explanation as you get deeper into the movie. Just don’t let that frustrate you away from the film early on. At just over seventy minutes long, it’s tough to say that it’s a slow burn, and we do get action and conflict right up front, but it is in the third act that The Embryo Hunts in Secret really succeeds (sorry, no spoilers here, my friends).

This is a more low key film, far artsier than what a fan of Hostel or Saw might be used to, but along the same lines when you really think about it. I hesitate to say, I was not even aware of Koji Wakamatsu before watching this movie, but now I’m looking forward to checking out more of his work – and seeing how he racked up over 100 directorial credits before passing away in 2012, I guess I’ve got my work cut out for me. 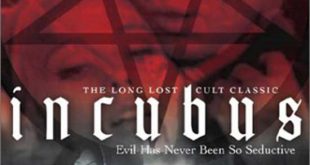