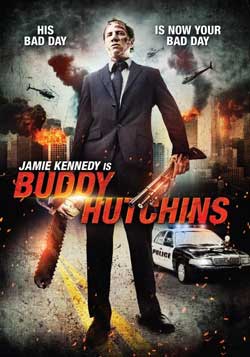 Buddy Hutchins is just a regular guy doing his best to support a wife and two kids. A recovering alcoholic, Buddy hasn’t had a drink for the better part of a year, but it turns out the only reward for his good behavior is a failing business and a cheating wife. Throw in a ruthless bounty hunter and an hot-tempered ex, and Buddy’s already short fuse is about to blow. Pushed over the edge and armed with a chainsaw, Buddy Hutchins is out for blood.

There was a time when Jamie Kennedy was a star.  Coming off of his performance in the Scream franchise, there were hopes for his future.  These hopes and expectations did not come to fruition when he began making movies such as Malibu’s Most Wanted.  The real nail in the coffin of a mainstream career for the guy was Son of the Mask, a sequel to the Jim Carrey movie.  The movie is now considered one of the worst ever produced.  Since then, Jamie Kennedy has been toiling around in anything he can get into in order to keep a hint of a career alive.  He had a role in Ghost Whisperer, but that’s the only real recognizable thing he has worked on in a long time.

One of the lesser known works he has been a part of recently is 2015’s Buddy Hutchins.  The movie is about a man named Buddy Hutchins (Jamie Kennedy) whose life unravels.  His wife is cheating on him.  His mother is growing ill.  His brother doesn’t care about him.  And he loses the dry cleaning business that he depends on for income.  Everything has fallen apart around him and he cannot take it anymore.  Buddy takes drastic action to deal with the pain of his life.

Buddy Hutchins depends upon the performance of Jamie Kennedy in order to succeed.  The first portion of the movie needs the performance to show the character’s nice, friendly side, with slight hints at a darker side.  Kennedy’s performance is not quite on point here.  The character feels so close to being unhinged as the movie begins that it becomes rather difficult to sympathize with him.  He feels more like a guy with a dark secret than a former alcoholic trying to get himself back together and on his feet.  In the second half of the movie, the character needs to become believably unhinged and feel like a threat.  This mostly works though Jamie Kennedy doesn’t have the weight in his performance to make it complete.  He goes a little bit over the top in his hysterics, making him feel less threatening even though he is doing threatening things.  With a better performer, or a better director to guide Jamie Kennedy to a better performance, the movie could have been great. 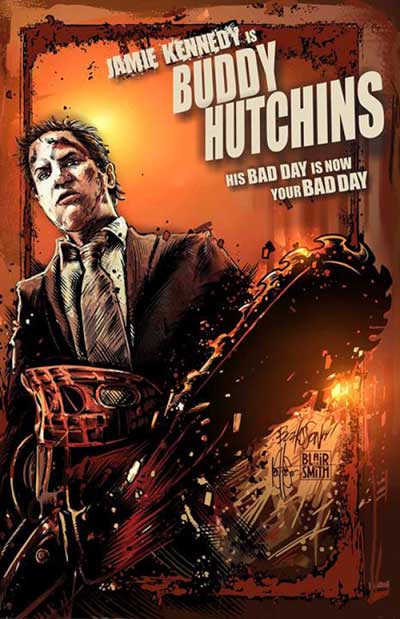 Outside of Jamie Kennedy, there were no other actors that I recognized or that gave real standout performances.  They were unknowns that didn’t make themselves known with their performances in Buddy Hutchins.  Most of them were able to hold their own and not bring the movie down; however, there were no performances that brought the movie up either.  It was a flat middle ground that the movie never veered away from in terms of the quality of performances.  Had there been a few performances of higher quality, the movie might have been a little bit more memorable.

The story itself had the potential to make for a great movie.  Under the right direction, Buddy Hutchins could have packed a gut-punch that would stick with the viewer for a long time after watching it.  Yet it never gets to that point in the hands of director Jared Cohn.  The movie plays the story out, but never has that emotional heft that could drive it into greatness.  Though you see what the character is going through, and you sympathize with him a little, you never feel attached enough that you care about the outcome.  There is the least amount of emotion necessary in order to make the movie passable.  There is no real connection and it keeps the movie from transcending the basic storytelling that it has.

Buddy Hutchins is not a movie that will leave its mark on the cinematic landscape for generations to come.  Instead of being impactful, it fizzles out.  The movie won’t stand the test of time and probably isn’t worth the amount of time that you would put in watching it.  It falls flat in almost every way.  There really isn’t anything that I would outright recommend about the movie, but there is also nothing that I would say is terrible.  It simply exists and that’s about it.  Buddy Hutchins is a movie.