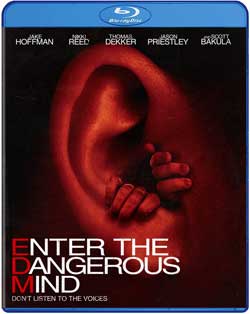 From the filmmaking team of Youssef Delara and Victor Teran (Bedrooms) comes the thriller ENTER THE DANGEROUS MIND, starring Jake Hoffman (The Wolf of Wall Street), Nikki Reed (Twilight franchise), Thomas Dekker (A Nightmare on Elm Street), Jason Priestley (“Beverly Hills, 90210”), Gina Rodriguez (“Jane the Virgin”) and Scott Bakula (“NCIS: New Orleans”).  Debuting on Blu-ray™ and DVD April 14 from Well Go USA Entertainment and Amplify, the film is a terrifying study of mental illness and the destruction unleashed when someone finally snaps. ENTER THE DANGEROUS MIND follows a reclusive composer (Hoffman) with an online following who has a tentative romance with a beautiful social worker (Reed). While this romance offers a glimmer of hope, his mind fractures as the voices in his head grow louder and more destructive.

Music makes the voices stop. That’s what Jim (Jake Hoffman) wants most – to hide away in his apartment, mixing original dubstep beats as a soundtrack to the insanity of daily life. But it’s not working too well lately. His brother (Thomas Dekker) bullies him into pursuing social worker Wendy (Nikki Reed), and their intimate encounter sparks an obsession that turns Jim into a human time bomb.

ENTER THE DANGEROUS MIND has a runtime of approximately 90 minutes and is not rated.
visit www.wellgousa.com.