Home | Germany Made DAMNED ON EARTH – 2 Trailers and Latest Pics!

Germany Made DAMNED ON EARTH – 2 Trailers and Latest Pics!

Hellagood cinematic apocalypse made in Germany

The mysterious disappearance of God and Satan, Jesus throwing orgiastic parties in Heaven while a broken radiator in Hell has its inhabitants shiver from the cold, a bunch of clueless angels and demons and an Earth that must face its end – that’s “Damned on Earth”, the latest feature horror comedy from Germany.

The suit-wearing Amon, an ordinary official of Hell, is assigned with a very special job (and co-worker) by Lucifer: Teamed up with the chaotic, oversexed Samsaveel he is to stop Belial, an out-of-control demon of Hell. Wreaking havoc on Earth, the latter tries to provoke a war between Heaven and Hell, which could get him a chance of becoming the sole ruler of the universe. As Earth turns into the battlefield for an epic confrontation between angels and demons, mankind must face an apocalyptic nightmare. Everything seems lost when Amon and Samsaveel finally find out the shocking truth about God and Satan. Can the unlikely duo still save the world? 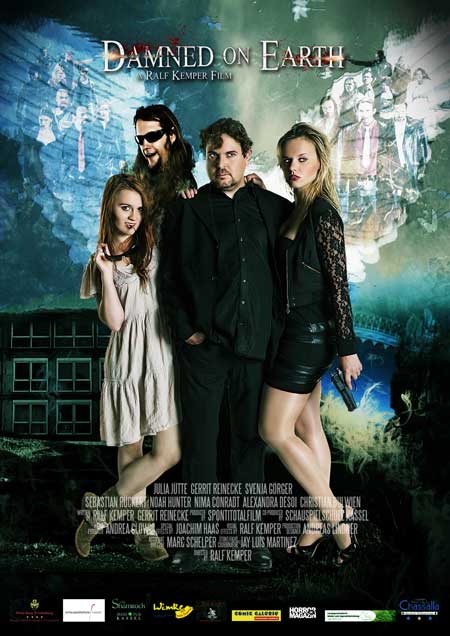 Ralf Kemper, director and producer for the film company Spontitotalfilm from Kassel, Germany, recently introduced his latest low-budget project to a selected German audience. It was met with praise for its style and bizarre humor.

A crazy cinematic joyride with a little bit of sci-fi and a lot of absurd humor à la Monty Python, accompanied by fresh, moody rock music that might as well make up the soundtrack of the latest Robert Rodriguez or Quentin Tarantino flick.

Ralf Kemper is not a stranger to the international film business. In 2010, his feature film “Toxic Lullaby” won the category “Best International Horror” at the internationally known New York Independent Film Festival and later found its way to the US market. Kemper hopes that his latest production will find fans in die USA as well. But he sends a warning message: Good Christian people better stay away from the slightly satirical flick for there is a good chance it might shock them with some kick-ass blasphemy.