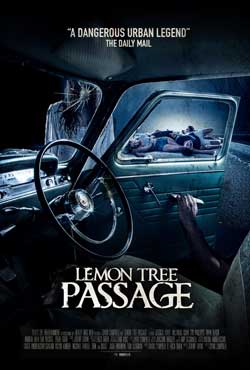 A couple of Australians introduce three American backpackers to the local legend of Lemon Tree Passage where a ghost of a motorcyclist warns young drivers to slow down. After seeing the ghost first hand they uncover a malevolent force that posses the area and threatens to wreak havoc on the final days of their vacation. Isolated and ten thousand miles from home, the tourists find themselves caught in the clutches of an evil force much more heinous than the local myth believed.

Why the motion picture industry feels that these loosely utilized words add further gravity to a horror flick anymore is beyond me, friends.  The phrase has many variations, from the slightly weightier “Based on a true story” to the less promising “Drunk Australians swear this is true.”  The latter was an instance of artistic license (I’m not even certain if critics are allowed that), but it’s what the makers of our latest offering should have printed across the top of their poster art if they wanted to honestly convey the conceit. Sadly, even that tagline would prove misleading. Allow me to explain.

An actual YouTube video opens the film, taken along Lemon Tree Passage Road in New South Wales.  Filming out the back window of a moving vehicle, it blurrily details a green light following the car as it speeds along. According to superstitious locals, it is the ghost of a motorcyclist who was killed in a hit-and-run, and appears whenever anyone speeds or drives recklessly on the motorway.  That’s correct, in this particular case “Inspired by actual events” means “We’re pimping out an urban legend to tell a completely different story that has absolutely nothing to do with said legend.” Or, something to that effect.

That’s precisely what “Lemon Tree Passage” attempts to achieve, like a feature version of a “Simpsons” episode in which it’s impossible to discern what the actual plot is until a third of the way in. More specifically, this freshman effort from writer/director David Campbell doesn’t bother divulging any sort of storyline at all throughout, choosing instead to wallow in a standard tale of haunting and possession in the woods as unlikeable, blandly attractive douchebags in their twenties scream at one another. A movie spotlighting the concerned biker spirit warning others to slow down by tailing them at a safe distance for 80 minutes would have made for more riveting cinema.

We are introduced to our lead trio on the beach, prompting me to initially suspect that the boss had deviously tricked me into sitting through “Wolf Creek” again. Thankfully, this wasn’t the circumstance. These Americans abroad consist of siblings Toby (Tim Poc**k, young Scott Summers in “X Men Origins: Wolverine”) and Amelia (Pippa Black), vacationing together on orders from their parents. Jessica Tovey as mousey Maya rounds out the group, and their banter subjects its viewer to terrible stabs at both dialect and dialogue to establish character. Case in point: As Maya scrambles after a windswept map, Toby calls out “Run Forrest, run!” though all three were likely in diapers when “Gump” was released. There really isn’t cause for these characters to hail from anywhere but Down Under, other than the empty promise of attaining overseas revenue.

They meet Aussies Geordie and Oscar (Tim Phillips, Andy Ryan), who teach them the beguiling ways of cricket (yeah, that’ll rack up U.S. ticket sales) before a bonfire that evening. They exchange scary stories, Amelia relating the worn chestnut of the old lady and mysterious dripping noise. Seriously, has Campbell’s only American interaction been with ten year-old campers in 1995? Oscar tells the Lemon Tree Passage legend, and the five immediately head out to the stretch of road to see if they can conjure the spectral glow. The first endeavor is successful, resulting in essentially a clarified reenactment of the web upload as the light tails them for a spell before vanishing.

On a second attempt, Oscar stands at the side of road approximately where the presence emerged, hoping to get a closer look. When the other four return to pick him up, he’s nowhere to be found and can’t be reached on his phone. Amelia and Toby take to the forest in search of him while Maya and Geordie wait at the car in case he returns and to take advantage of the solitude for a little tonsil tennis. Their tame make-out session is interrupted by the discovery of the lost comrade in the trunk, asphyxiated via a tube attached to a gas mask from the tailpipe. Happy to finally arrive at the piece’s true context, I didn’t question the sixteen different ways in which this opening homicide makes no sense.

Not a stitch of screen time that passes from Oscar’s death even dips its toe in the waters of reason. Maya suffers from visions that vaguely foreshadow motive, if nothing else. She also stumbles across a couple of clues earlier on, which she inexplicably keeps to herself until it’s convenient for the film’s progression to reveal them to the others. Delivering a standout performance in a thankless role, Nicholas Gunn portrays Geordie’s older brother Sam, who arrives to deliver the answers we’d long since stopped caring about in a teary climatic confession. This finale, which not only negates Sam’s first scene but turns its inclusion into a baffling loose end, manages to be simultaneously obvious and confounding. As is usually accurate with such a combination, the simple term “lame” sums up the reveal perfectly.

Campbell and co-writer Erica Brien borrow random elements from better films every step of the way without a thought given to cohesion, much in the same way the makers of last year’s “Grave Halloween” did for their goofy ghost opus.  In fact, “Passage” reminds so much of that SyFy network nonsense, I’m quite confident that I won’t be able to distinguish between the two by the time you read this.

Afforded a bigger budget, better locale and the smoother transition of Canadians awkwardly pretending to be Americans, and “Grave Halloween” almost pulled its pap off. Though I’d much rather root for the underdog, I’m afraid “Lemon Tree Passage” doesn’t even come close.