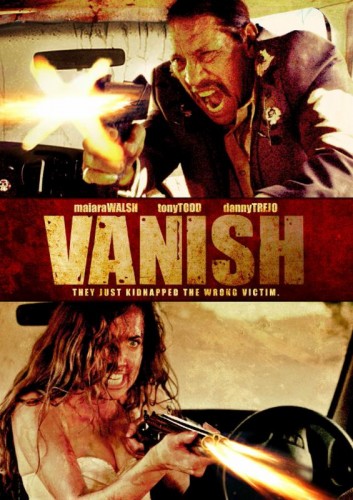 Fans of Death Proof, Reservoir Dogs and Machete will be right on board with the road trip thriller VANISH, a new action shocker that rides in the fast lane and never slows down. The adrenaline-fueled film comes to Digital Download, Blu-ray and DVD from Dark Sky Films on February 24, 2015.

Hoping to score a hefty ransom, three thugs viciously kidnap a drug cartel boss’ only daughter from her home in broad daylight. The captors imprison the young woman in their van, dictate terms to her notorious father, and then travel to the outskirts of the desert for the exchange.

What the amateurs don’t realize is that their victim is a force to be reckoned with on this violent road trip full of murder and mayhem. It’s hell on wheels as time ticks away and the pressure mounts. The kidnappers find themselves in increasing danger from the police, hit men and crime bosses, and must find a way to keep their plan in order before all hell breaks loose.

Featuring standout performances from Maiara Walsh (Desperate Housewives, Disney Channel’s Cory in the House, The Starving Games) and genre favorites Tony Todd (Candyman, Final Destination, Hatchet II) and Danny Trejo (Machete, From Dusk Till Dawn) and a story that puts a bold new spin on the action thriller, VANISH is a high-octane trip through a no man’s land where trouble lurks behind every turn of its twisting plot.

First-time writer-director Bryan Bockbrader (who also appears in the film) told Shock Till You Drop, “I had this idea of doing a road movie from the perspective of inside the vehicle, giving the viewer a chance to ride along as a passenger. As the tension builds, we are trapped in this intimate place with extremely dangerous people and when the s— hits the fan (or van), there’s no escaping the chaos 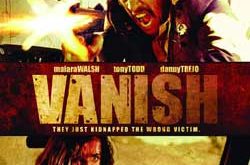