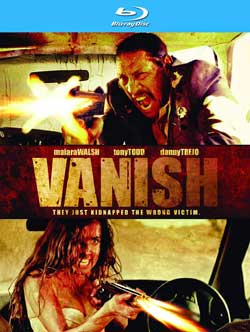 Three criminals kidnap the daughter of a drug cartel boss. But their plans unravel, as problem after problem arises for them, and they start to conspire against each other.

In the beginning of VANish, we see a man captured from a romantic–and adulterous–rendevous with a wealthy woman. Cut to two bantering low-lifes, Jack and Max, driving around in a van, sounding a lot like Jules and Vincent–or maybe Dante and Randall. (The work they’re performing, definitely, is more in the Jules and Vincent vein . . . but they’re not working for any crime boss. )

Jack and Max kidnap Emma, whose drug dealing Mexican father, Carlos (Danny Trejo), captured the man in the beginning of the movie: it turns out Jack’s father and Carlos’s wife were the ones clinking champagne glasses. Unbeknownst to Max (Jack’s half brother), this is a revenge ploy. It’s not about the ransom. It’s about meeting face to face so Jack can do the ole’ eye-for-an-eye thing to Carlos. . . . because Carlos offed his father.

After the kidnapping, Jack and Alex pick up their friend, Shane, who’s helping them out–and needs some quick cash to buy drugs. (He’s hooked on smack.) As they drive along in Jack’s van, they get to know Emma, who’s a tough girl, and is mostly unafraid of them (because they all reek of incompetence.) Dig the scene where she puts them on, convincing them she killed her whole family over a My Little Pony set.

Things start to go awry for the criminals, and, as their plans become increasingly bungled, they start turning against each other. It then culminates in a blood-drenched conclusion in the van. . . . And I mean, blood-drenched.
The Tony Todd scene alone makes VANish worth seeing. It’s a familiar sequence: a police officer pulls over some crooks for a bad taillight. They have everything, of course, to hide, and the paranoid tension inevitably turns violent. Yeah, it happened in FARGO and lots of other movies. But not with Tony Todd as the officer! So Jack, Max, Shane, and Emma get pulled over by Todd, who essentially does his Candyman routine to them, intimidating the living crap out of them for a very tense and long couple of minutes. Todd is grimly hilarious and has some truly fantastic lines: he doesn’t care for movies and TV, but loves commericals . . . he tapes them on VHS.

It’s at this moment you realize you’re kind of, maybe, sort of, rooting for the bad guys, and that VANish has effectively pulled off the antihero–that classic crime movie trope. You’re not ready for them to be caught and thrown in jail. You know, in stories like this, crime seldom pays, but, still, you like to see the antiheroes go down in blazes of glory.

VANish is a crime movie, to be sure, but it has a cool, laid-back attitude toward genre, as its climax turns into the grisly stuff of horror: Emma escapes with Shane . . . but maybe a drug addict with severe PTSD, feeling his withdrawal symptoms, who’s just killed someone with a machete, is the wrong person to be trapped in a van with.

Trejo and Todd have small roles, but have top billing. Yeah, that’s the oldest marketing ploy in the book. All the other actors, though, do just fine, carrying this dialogue-heavy movie along at lightning pace. (Of course, Trejo and Todd are sheer delights in their limited screen time.) But, hey, so is everyone else. 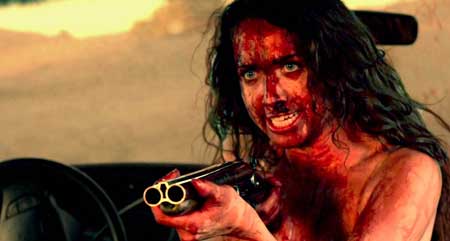 The movie also does well exploiting the theme of modern technology: were it not for smart phones, Facebook, etc., it reminds us, these people would have a much more difficult time doing harm to each other. Food for thought!
I strongly recommend seeing VANish. It’s a bit like FROM DUSK TILL DAWN without the vampires and the strippers. I mean that in a good way. It’s an unusually solid crime thriller with horror elements thrown in. Hats off to writer, producer, director, and supporting actor Bryan Bockbrader for making this one. Hopefully he has a few more like VANish in him.