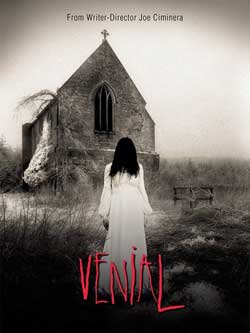 In the aftermath of World War II, a woman finds out her husband has died in the war. She is devastated, and questions her strong religious tenets. Meanwhile she and her two children, who live in a very old house in the country, start noticing strange supernatural phenomena.

VENIAL is a melodramatic film from the get-go. It opens in a flurry of clouds, and Claire (Tiffany Browne Tavarez) walks through an orchard, brooding, her frumpy dress blowing in the wind. The scene then switches to a flashback of her husband and their children eating at the dinner table.

She’s in despair. Total despair. It’s 1945 and she has just learned her husband did not survive the war. Nevertheless, she attempts to continue on with her life, raising her two children, Peter and Helen.

They live far out in the country, in a house that is very old (and creepy, of course). And, because this is a totally familiar horror plot, just as Claire begins to question her faith, sinister ghosts start to manifest inside the damned old, spooky house.

Just as things are starting to seem off, three priests come by the house to check in on poor Claire and the children. Whilst cleansing the house of evil, another ghost shows up. It’s someone the priest knew!

It turns out the house is some kind of vehicle for long-gone, nasty secrets—involving the dead—to re-emerge. Can our friends escape the old house’s death-dealing, spiritual tentacles?
VENIAL takes itself a little too seriously—enough to mostly provoke laughter. Okay, it takes itself entirely too seriously. 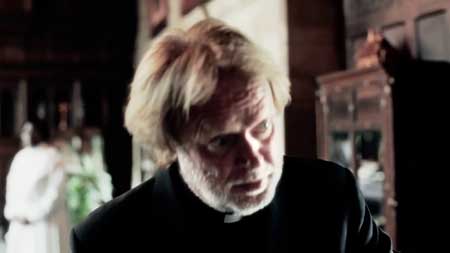 For one, the “period” seems a little confused, are just plain off. The costumes are not exactly accurate. They seem, at times, much older than postwar America. And speaking of America, who still had a British accent that late into the twentieth century? Because the two children are seemingly trying to talk like Mark Lester in OLIVER!

So, the period mistakes and the fakey British accents wouldn’t seem so ridiculous, if everything weren’t presented under the tone of such an urgent, devastating Gothic tale. The budget is too tiny to pull something like that off, unfortunately. 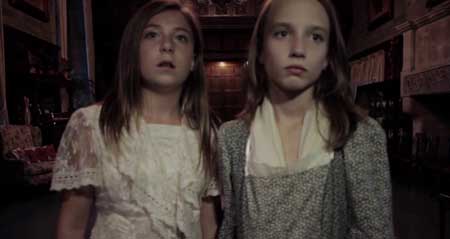 The acting also isn’t strong enough to make any of the characters identifiable. Claire, for instance, doesn’t even seem like a real person . . . not to mention the Jason Miller- and Anthony Hopkins-wannabe priests. Yikes. Just say,”the power of Christ compels you,” already.

The climax is muddled, too. At the last second the movie tries to break the formula, and it doesn’t seem all that radical. It seems confusing.

VENIAL is far from scary. And much of that owes to its special effects. One of the recurring ghosts looks a lot like Marilyn Manson—without his contact lenses. And at the “ghostly manifestation” scenes, it really feels like a cash-in on recent paranormal flicks like SINISTER and THE CONJURING. 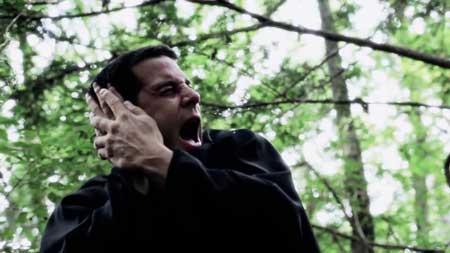 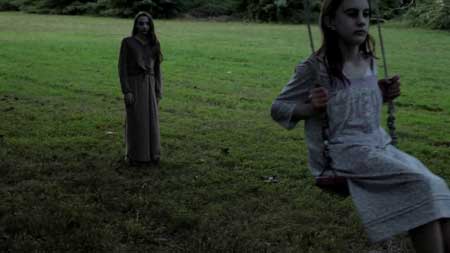 The stark atmosphere isn’t pulled off, either. It takes more than frowning people, crappy weather, and an old, creaking house for a set to create an affective mood. Regarding the film’s camerawork, too, it could have been much more adventurous. Lighting, also, could have done lots for the intended atmosphere. As with many low budget films—especially the colossally low budget films—it walks a fine line between being too ambitious, and not ambitious enough. It comes across as being heavy-handed without anything supporting its deathly serious attitude.

VENIAL is a sign, indicating the hauntings and supernatural subgenre is being overused. See it only if you’re ready for a real train wreck. It’s the antithesis of entertaining, and not in a Michael Haneke sort of way. 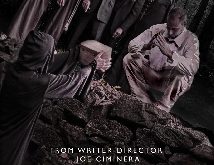 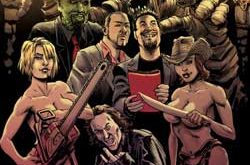