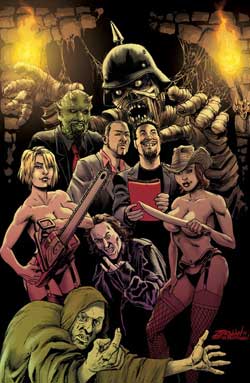 James and Mike are tired of art films taking away the credit that horror films deserve. So, they get a script from the devil to make the best horror film ever. The script has three stories in it. The first is about Nazis that awaken a mummy’s curse. The second tale is about an alien that crashes a battle of the bands and then starts eating the contestants, and the last story is about a man who gets possessed to kill televangelists.

From the look of the cover and the description on the back, it sounds like a pretty wacky time. The film is called “Hack Job”, and as it states, James and Mike have grown tired of art films and want to give credit back to the horror markets. The intention is surely good, as that seems to be at the heart of many horror fans.

Hack Job, is intended as a form of anthology that breaks into smaller shorts adding visual narrative along the way. The 2 filmmakers are directly given a script from the devil in which the shorts play out in various segments of the movie. Now as it stands, it’s got a pretty good collection of cameos, and is intended to be of the camp-cheesy-horror comedy bunch.

The comedy is sort of limited to that which is “actually” funny and that which is just silly to watch. The first short has to do with a curse, an expedition and a few poorly wrapped mummies. I didn’t really get the point of this one besides trying to live up to extreme camp. Though there seemed to be a technical issue which I’m not sure was an effect or just an issue. In any case, some serous interlacing issues going on through this entire pieces ruined my focus. The effects were handled as cheaply and as low budget as possible making it am extremely poor piece to start out with. In short, its better to fast forward past than trying to fugue out where your time went. Maybe it was intended top be poor but you have to assume that not every one always gets the joke.

There are plenty of topless shots in this films which are thrown in…well in that Troma kind of way. You know….. the shots that really didn’t “have” to be in the film, but are thrown in to raise a few eye brows. The movie has got a nice helping of hottie shots which makes up for the bad short pieces. 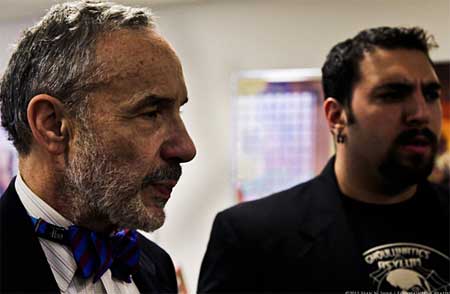 In another short, an alien starts to take over the locals leading up to a local battle of the bands competition. There is this cheesy tentacle thing going on that is kind of funny, but it’s the appearance of Gwar’s Oderus Urungas, that highlights this piece. He arrives to slay this weird looking alien thing that……well, is just pretty darn crappy looking but done so to pay tribute to the “also “crappy looking monsters from the 80’s Sid and Marty Krofft creations. Or something…… I did appreciate the old school practical effects route in which Oderus is a perfect match for.

Cult filmstress Lynn Lowry makes an appearance, but overacts an assumed agent script piece that is really weird to listen to. Debbie Rochon, does a stand alone piece, thought its pretty much kept to a 1 minute cameo. 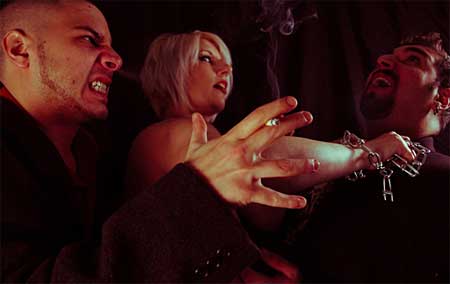 The film continues in this vein with intercut segments joining 1 silly piece to the next. A few slasher style scenes are thrown in to inject the horror element, which comes across over pretty weak. 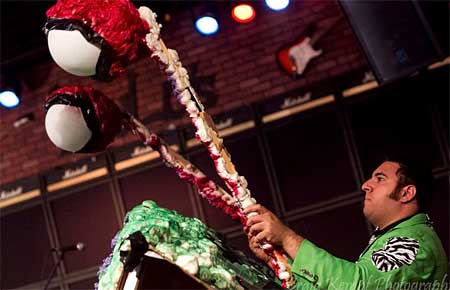 As a whole “Hack Job” has a bit of that “Amazon women from Mars” vibe, but would benefit from some tightening up on the stories, the script and the intentions. I do love horror comedies when done right. I’m actually not too sure of what the magic formula is, but i just didn’t find it much here.

Hack Job, essentially is a film, if someone asked me about, I’d have to say…hey you want to watch something stupid?…Here ya go. Maybe at the end of the day, that’s all Hack Job really aspired to be.