EmaFilms, T&A Films and Epic Pictures Group are pleased to announce that TURBO KID, a Canada-New Zealand co-production, will make its World Premiere at the 2015 Sundance Film Festival in the Park City at Midnight section.  The Festival takes place January 22 to February 1 in Park City, Salt Lake City, Ogden and Sundance, Utah.

TURBO KID is a post-apocalyptic, BMX-powered, blood-splattered love story that follows the epic journey of an orphaned outcast reluctant to be a hero in the wasteland of an alternate future.

“We always envisioned TURBO KID to be like some lost crazy kid’s movie from the 1980s that’s somehow has just been rediscovered,” said RKSS.  “We wanted a love story with the exploitation elements we grew up with, a post-apocalyptic scenario, over-the-top gore FX, super turbo explosions and a few BMX tricks for good measure. We were going for a retro inspired aesthetic, not just from an overall visual presentation, but from how the narrative unfolds. We wanted TURBO KID to appeal to a whole new generation of warped kids (and crazy adults).”

RKSS, also known as Roadkill Superstar, has written and directed over twenty short films, many of which have won awards at various festivals abroad, including LE BAGMAN, T IS FOR TURBO and DEMONITRON.  TURBO KID is their first film feature collaboration.

T&A Films is a partnership between two New Zealanders – producer and distributor Ant Timpson and arts and entertainment lawyer Tim Riley.  Their most recent credits include HOUSEBOUND and ABCS OF DEATH 2.

EMAfilms’ Anne-Marie Gélinas and Benoit Beaulieu have partnered on various productions including the multi-nominated A BOTTLE IN THE GAZA SEA, which they co-produced with France and Israel, and Martin Villeneuve’s debut feature MARS & AVRIL.  MARS AND AVRIL premiered in Karlovy Vary, Czech Republic in 2012. The film was also honored with 4 Genies nominations and 5 Jutra nominations in Canada.  Gélinas also served as a Line Producer on REBELLE (WAR WITCH), which received an Academy Award Best Foreign Film nomination in 2013, a Silver Bear Award in Berlinale in 2012 and Best Film and Best Actress at Tribeca in 2012.

TURBO KID is financed by Telefilm Canada, New Zealand Film Commission, the Quebec Provincial Tax Credit Program, the Canadian Tax Credit Program and Alchemy 24 and our collaborators Cinepool, Departement Camera and Curious Films. The film is distributed in Canada by Raven Banner and in Quebec by Filmoption International.

Epic Pictures Group is representing worldwide sales rights outside of Australia, New Zealand and Canada at the 2015 Sundance Film Festival. 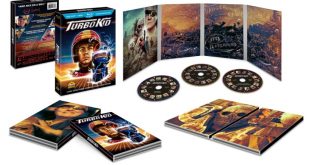