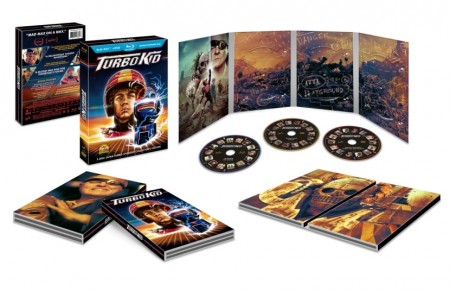 Turbo Kid follows “The Kid,” (Munro Chambers) an orphan left to survive on his own through drought-ridden nuclear winter, traversing the Wasteland on his BMX, scavenging for scraps to trade for a scant supply of water in a 1997, ruined post-apocalyptic world. When his perpetually chipper, pink-haired new best friend Apple (Laurence Leboeuf) is kidnapped by a minion of evil overlord Zeus (Michael Ironside), The Kid summons the courage of his comic book hero and prepares to deliver turbocharged justice to Zeus, his buzzsaw-handed sidekick Skeletron, and their vicious masked army.

Bolstered by a pitch-perfect synth score, and clever and cheeky period details, co-directors François Simard, Anouk Whissell, and Yoann-Karl Whissell, collectively coined RKSS, create a raucous retro-futuristic action comedy that pays homage to ’80s movies great and small, while adding their own flair with inventive and exuberant violence and gore (prepare for disemboweling by exercycle). Sci-fi legend Michael Ironside delivers with malevolence and glee as the larger-than-life Zeus, a despicable villain with joie de vivre.

In addition to the main feature on both Blu-ray and DVD, the Ultra Turbo Charged Special Collector’s Edition will include Bloody Wasteland: The Making of Turbo Kid, a making of the movie featurette, T is for Turbo, the original short that preceded that film, several mini documentaries, Fantasia, Gore, Stunt, Funny, The Kid, Apple, Zeus, film festival introductions from BIFFF (Brussels), Edinburgh (UK), Sitges (Spain) and 2 still Galleries including Design/On Set, Fan Art, and ‘The Ride’ booklet. The suggested retail price for the collection is $29.99; and is currently available for pre-order at turbo-kid.com at $19.99. The collection will be available exclusively on Amazon.com and directly from the filmmakers’ site: turbo-kid.com/store

The content included in the “Ultra Turbo Charged Collector’s Edition” is: 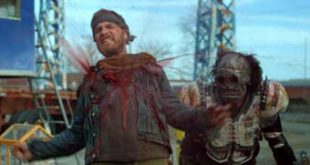