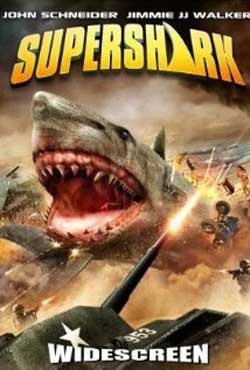 The negligent activities of an oil company in Florida have caused some unintended biological consequences. A giant shark, which walks on land, now terrorizes dwellers on the beach. A marine biologist, a skipper, and a fun-loving disk jockey must stop it before it’s too late.

Kat Carmichael (Sarah Lieving, from MEGA SHARK VERSUS CROCOSAURUS) is with the Oceanic Department of Investigation. Well, she was. Now she’s posing as though she still is to take down a venal and irresponsible oil company. Allegedly, she lost her authority somewhere along the way. But she’s still a marine biologist, or “fish doctor–not one of those docs that studies your mind . . . makes you think you’re crazy.” 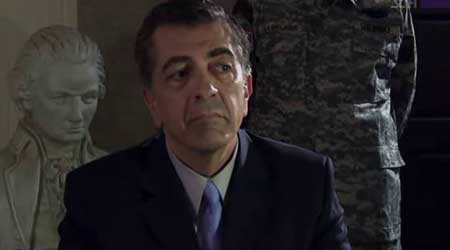 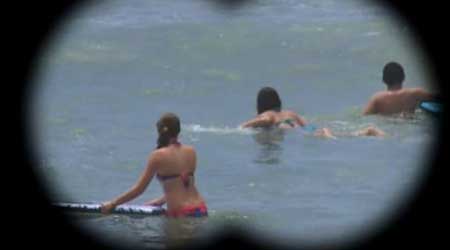 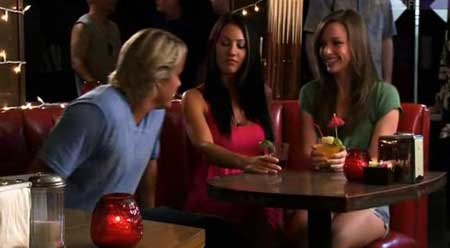 She’s investigating a spill off the Florida coast, and hires the help–and speed boat–of Jimmy Buffett wannabe Skipper Chuck (Tim Abell). Predictably enough, there was a spill, and company man Roger Wade (John Schneider) is doing everything in his power to cover it up. Meanwhile, tan inhabitants of the beach are being eaten by a giant shark, which can walk on land with its fins and jump . . . like really high.

Could it be that this shark is an unintended byproduct of the chemical spill?

Now, it’s up to Kat, with the help of Skipper Chuck and a disk jockey named Dynamite Stevens (Jimmie Walker aka the Windshield Wiper Man from AIRPLANE!), to stop this colossal beast before it ruins another bikini contest. Dynamite would like to be able to yell “Free tacos for everybody!” at the sight of large, fake breasts, without an impending tragedy on his hands. Thank you very much.
They’d also like to take down the oil company, but that’s easier said than done. And yes, Ray is, actually, disseminating political commentary. We thought we’d never see the day.

SUPER SHARK is a flimsy movie. The CGI’s bad. Oh God, is it ever? Wait until you see the military tank squaring off with the shark at the end of the movie. Ouch. The acting’s bad. But then again how can you make a line like, “they say it came out of the water and walked on fins,” sound good? The story’s full of holes, and the characters are paper thin. Speaking of characters, there are unfathomable amounts. Aspirations of Dickens or something. 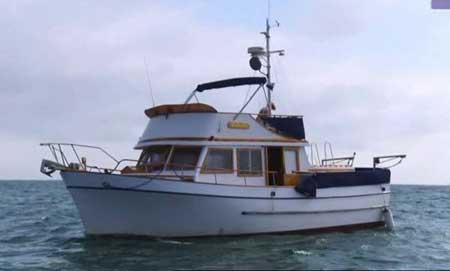 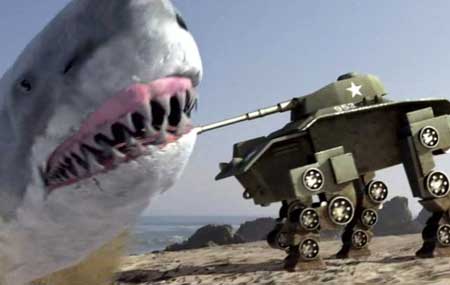 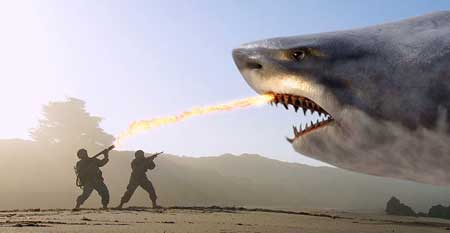 Most of these characters go nowhere, but are developed–or attempts were made to do so. Agh! Why? Why “develop” three lifeguards if you’re only going to kill them off thirty minutes in? Hey, it worked in PSYCHO.

Overall, SUPER SHARK is pretty damn entertaining. It has its charms: like the blaxploitation theme song. And the photographer dudebro who doesn’t notice a dinosaur-sized shark thump onto the beach right behind him before devouring him. And one-liners like: “Now you’re extinct!” Fred Olen Ray knows how to crank them out without getting too hung up on the details. If anyone should be able to pull off one of these shark movies, it’s him. And he does. So check out SUPER SHARK, if you’re into Ray, corniness, and this strange and specific wave of creature features.