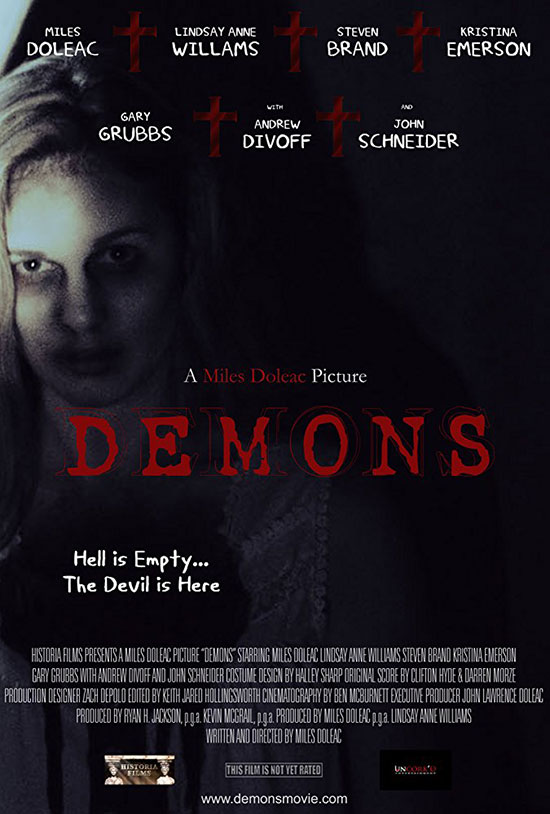 Celebrated fiction writer and former priest, Colin Hampstead, and his wife, Kayleigh, are tormented by the ghost of her late sister, as the details of her grisly death are slowly uncovered.

The English film critic Mark Kermode often describes Jaws as not being a film about a shark. And in some ways, he’s right. Like Laura Palmer’s murder in Twin Peaks, it’s about the effects a tragedy can have on a community, how it can shape an individual. Demons, written, directed and starring Miles Doleac (The Hollow), is not about demons in the fire and brimstone sense. It’s about the personal demons that stalk us daily.

Colin Hampstead is a failed priest turned celebrity author. He has a big house, a cute-as-a-button daughter and a philosopher wife, Kayleigh (Doleac’s real wife, Lindsay Anne Williams). Everyone has a tale of how they met their true love, right? You were at your favorite bar, you both reached for the same bag of rice at a supermarket, you house shared in the early 2000s. Well, Colin and Kayleigh met when the former came over to exorcise the sister of the latter, on the behest of her father. One thing led to another and, before you know it, the sister, Jade, was dead and everyone was traumatized by the entire evening. You know, a tale as old as time.

Now, eight years on, the happy couple run a bed and breakfast funded by Colin’s writing. It would appear that even the ritualistic manslaughter of another human being can’t seem to affect the career of a white male. However, I digress… 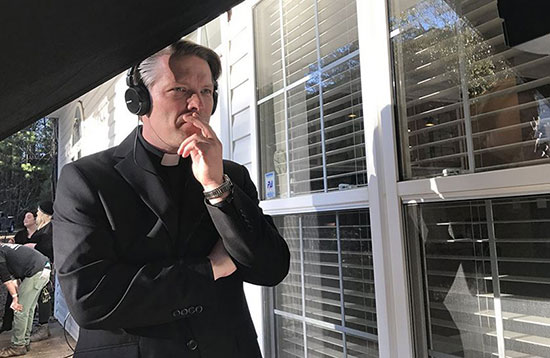 Colin and Kayleigh are on hand to receive their friend Billy (Steven Brand) and his free-spirited fiancée, Lara (Kirstina Emerson). And by free-spirited, I’m using the Hollywood shorthand for often naked and talking about everyone’s chakras. Billy and Lara are getting married, so everyone should be happy, but alas, this is not to be the case. Colin is having doubts in himself as a writer and Kayleigh is haunted by the spirit of her dead sister. So, you know, they’ve both got similar issues.

Demons is such a slow burner of a film that it’s practically standing still. It doesn’t help that Colin and his friends are rather insufferable people to be around. They’re the sort of shoe gazing, faux-intellectuals you would move quickly from, should you have the misfortune of being cornered by them at a party. Admittedly, this is likely on purpose, but it doesn’t make the film any more interesting to watch.

To be fair to Demons, there’s a really interesting premise at the foundation of the film. Through flashbacks, we become privy to Colin’s own doubts about Jade’s possession. Largely, this is down to Kayleigh and Jade’s father played by Andrew Divoff (Air Force One). Daddy dearest is a staunch believer in the big guy in the sky, which manifests itself in a terrible temper inflicted upon his children. For Colin, the chances are pretty good that Jade is experiencing some form of trauma inflicted upon her by her father. But who is going to believe him? With this in mind, when we return to the present, how much of what happened to Jade is a direct cause of what is happening to Kayleigh, whether it be supernatural or not? As I say, it’s interesting. The premise, that is. The film not so much.

If you’re looking for a horror, that’s a really a drama in disguise, then Demons may scratch that itch. However, for everyone else, it’s cod-philosophizing is liable to send you to sleep before the end credits roll.