Home | Get Your Wretched Claws Into ZOMBIEWORLD

Get Your Wretched Claws Into ZOMBIEWORLD

RLJ Entertainment will be releasing ZOMBIEWORLD on DVD on February 24, 2015.

[youtube]https://www.youtube.com/watch?v=IWVsT58BP8s&feature=youtu.be[/youtube]
ZOMBIEWORLD is a horror anthology focusing on survivors across the world as they struggle to overcome horrifying circumstances when a pandemic brings forth a zombie apocalypse. The collection of blood, guts and mayhem will be brought to life by a group of new and up-and-coming directors from around the world that Ruthless Pictures and Dread Central will handpick from short film entries received between April 21, 2014 and May 30, 2014 on Dread Central.com.  The work of each chosen director will be featured in the film and will bring his or her take to a world now populated with flesh-eating corpses.  Among the brilliant shorts to be included in ZOMBIEWORLD is Peter Horn and Jared Marshall’s Dark Times, a blood-splattered scamper through the woods shot entirely in POV, where zombies, aliens and even Santa Claus make an appearance. 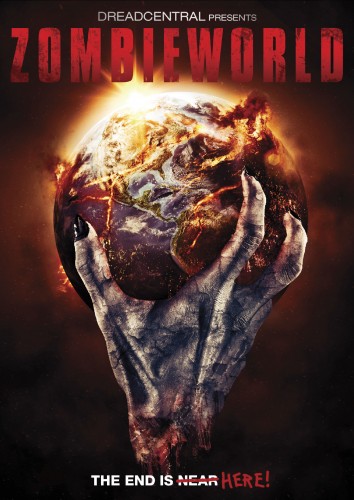