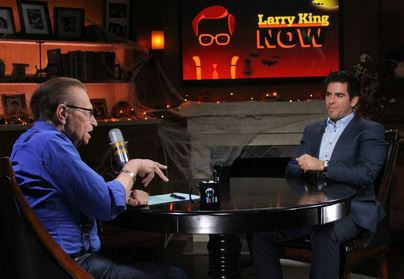 Halloween is alive in Larry’s studio on the Emmy nominated series  “Larry King Now” as he dissects the brain (figuratively that is!) of Eli Roth–the man behind some of Hollywood’s goriest films. Eli dishes about his love for horror and even gives Larry some tips for spooking his boys!

Horror filmmaker Eli Roth talked to Larry King about how “The Wizard of Oz” planted the seed for his future horror film obsession, “I wanted to hear the goriest scariest thing, if I went to the library I’d look for scary books, I was obsessed with it.”

Eli gave his take on why audiences are drawn to horror and genre content, “What horror movies allow is a span of 90 min where they say ‘It’s okay to be scared, it doesn’t mean you’re a coward’ and people need that release.” The filmmaker also told Larry that he likes to sit in the front during his movies to watch the audience react, “If people just sort of sit there and they look at their phone or shuffle, you’re dead” he explained, “The best thing that can happen is when people are gasping and they’re not looking.”

Eli told Larry King how he and other horror filmmakers use film as political allegory “your film could be not just a scary entertaining movie but actually could have a lot of political and social commentary layered underneath it.” He wrapped up his interview by answering social media questions from some of his biggest fans, including what it was like working with Marilyn Manson and Lana Del Rey.

I Was Obsessed With Flying Monkeys

90 Minutes Where It’s OK To Be Scared

Horror filmmaker Eli Roth gives his take on why audiences are drawn to horror and genre content.

“Hostel” Was Political Allegory For The Bush, Cheney and Rumsfeld Years

Horror filmmaker Eli Roth tells Larry how he likes to sit in the front during his movies to watch the audience react.

I Shot A Video With Marilyn Manson And Lana Del Rey

“What makes a horror film truly scary is when it makes the filmmaker scared.”

“The fear within the movie has to be absolutely real.”

“The highest compliment someone can give a horror movie is when people say I couldn’t watch it.”

“Is it weird that I like to see someone get their face blown off with a blowtorch?”

“The devil is here we have to convert him. No its just Eli Roth.”– on Christian missionaries who tried to stop shooting of his latest film the “Green Inferno”

“If I have an idea, whether I want to write it, produce, or act it, i just go with it.”

“There is no place in society where we can be scared.”

“What horror movies allow…is 90 minutes where it’s okay to be scared.”

“Every movie reflects a different period of your life.”

“Horror movies generally reflect the fear of the time.”

“When everyone (in the audience) actively participates in a movie…it’s the greatest feeling the world.”

“The haunted house is never as scary the second time through.”– on watching scary movies for a second time

“The Shining is the movie I have dissected over and over.”