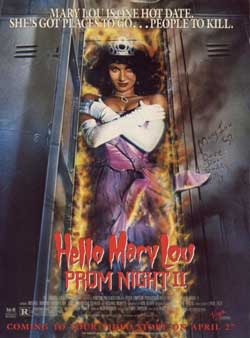 Back in the 50’s prom queen Mary Lou Maloney died during the prom after a prank went horribly wrong. Now she’s back and she isn’t happy.

Even though it doesn’t really have anything to do with the original Prom Night (other than the fact that it takes place at the same high school) I have always been a big fan of Hello Mary Lou: Prom Night 2. As a matter of fact I think that it rules and I have seen it countless times over the years. It’s one of those movies that I can definitely watch a million times (if not more) and never get tired of and I think it actually gets a little bit better with each new viewing. I first saw it on VHS back when I was in middle school in the late 80’s (I really wanted to see it at the theater after I saw the trailer on television but I never got the chance to do so) and I can say that it still kicks as much ass now as it did then. It holds up a lot better than some of the other movies I loved when I was younger and it is without a doubt one of my favorite horror films from the 1980’s (which is saying a lot as it is my favorite decade for horror flicks). 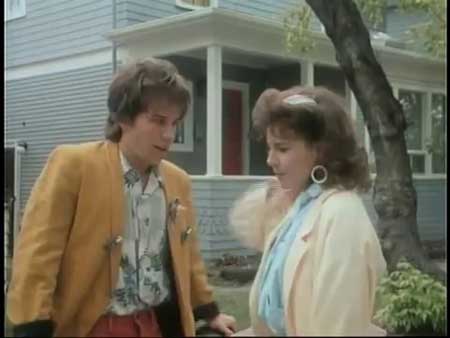 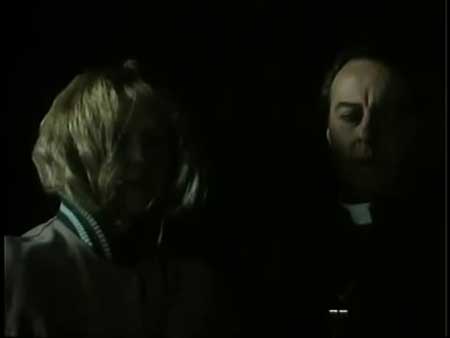 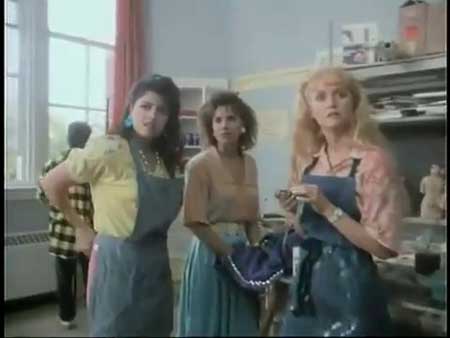 One of the many reasons that I dig this movie so much is the fact that it is just a lot of fun in general. I think that the premise is awesome and if you are into films that revolve around the spirit of a dead person resurfacing years later seeking revenge for his or her death then you will get a kick out of this one. It doesn’t take itself too seriously and the people behind it threw in some subtle humor from time to time that is actually pretty funny and adds to the overall appeal of the movie. I always have a blast when I watch it and it is one of those films that I just don’t want to end because I am having such a great time with it.

If you ask me Mary Lou (played by the lovely and talented Lisa Schrage who obviously had a ball playing the part) makes the movie. She is such an awesome villain that you can’t help but like her. She is a badass bitch and I had loads of fun watching her take out her victims in a number of cool and creative ways. Even though she’s a horrible person (even before she dies and becomes an evil, vengeful spirit) I found myself rooting for her and wanting her to win in the end regardless of all the terrible things that she does to other people. She’s genuinely creepy at times, throwing around Freddy Krueger-like one-liners at others, and just an all around awesome horror film antagonist in general (plus she’s easy on the eyes in an old-fashioned kind of way). I love Mary Lou Maloney and I’m a little surprised that she never really got the love and respect that she deserved from horror fans as I thought that she was nothing short of awesome in every conceivable way and had the makings of a horror film icon for a lot of reasons. 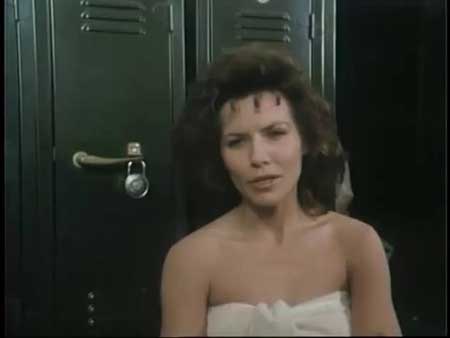 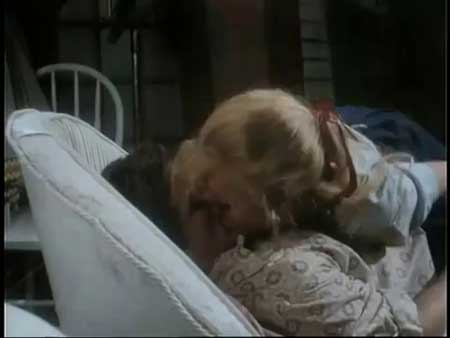 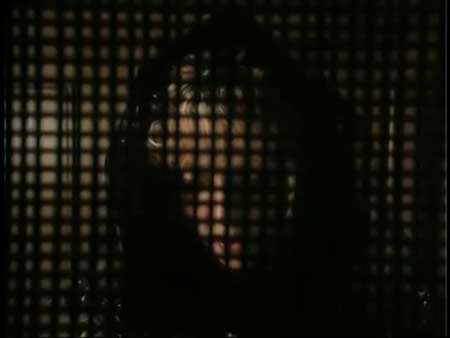 The rest of the cast is great too (plus it’s cool that many of their character’s last names are nods to other horror film directors such as Browning and Carpenter). Wendy Lyon is good as Vicki, the final girl who becomes possessed by Mary Lou for a period of time during the movie. I also liked Louis Ferreira who plays Vicki’s boyfriend Craig and I absolutely loved Beverly Hendry as Monica, Vicki’s best friend (I had one hell of a crush on her when I first saw this movie back in the day). Other than Mary Lou my other favorite character was Bill Nordham, played by the always awesome Michael Ironside. He does a great job as usual as Craig’s dad, the school principal (and Mary Lou’s accidental murderer) and it was nice to see him playing a nice guy for once (even if it was a little odd since I am so used to seeing him as the bad guy). Overall Hello Mary Lou: Prom Night 2 has an excellent cast and everyone delivers.

Did I mention that it has some pretty cool death scenes? Mary Lou doesn’t play around when it comes to killing people and the results are pretty damn awesome. We get a whole slew of some entertaining death scenes which includes someone being burned to death, an electrocution, a unique hanging, and my personal favorite that involves someone getting crushed to death by lockers. Of course we get a whole Carrie-like scene at the end when all hell breaks loose at the prom thanks to Mary Lou and people start dying off left and right which is just the icing on the cake. There isn’t a shortage of death in this movie and I couldn’t have been happier. 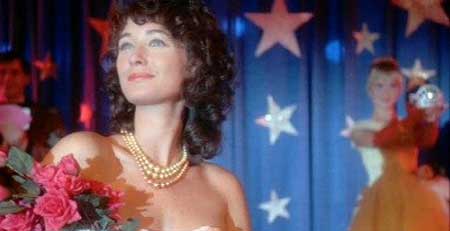 If you couldn’t tell I really love Hello Mary Lou: Prom Night 2 and think that it is an underrated gem. I’m not entirely sure why it is so overlooked by most horror fans as it deserves much better. If you’re in the mood for a classic 80’s horror flick that is a load of fun then give this movie a shot, you won’t be disappointed. 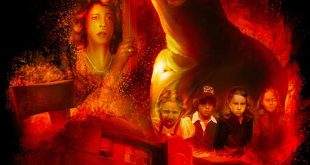