WHO: DIRECTOR – BILL ZEBUB
MOVIE: The Worst Horror Movie Ever Made & Assmonster: The Making of a Horror Movie

Readers upon checking out Bill’s work, I had to post a few of his trailers. Looks like great bizarre and hilarious stuff for fans of weird psycho guerilla filmmaking horror…. see trailers section for clips – editor

I’m familiar with some of your movies from horror conventions, but where else can fans purchase your movies?

All of my movies have distribution, but I don’t know where most of my fans get their movies. I am pretty sure that the best prices are just a simple matter of entering a title into Google. Supposedly my movies are available at many brick-and-mortar stores, but I think the easiest way to obtain a copy is to go through an Internet vendor, or maybe to rent one from Netflix or Blockbuster.

You made a movie called “The Worst Horror Movie Ever Made”, so the obvious questions is… how bad is it?

If you like that sort of stuff then it’s not bad at all, ha ha. It was shot in that unique style on purpose.

In “Assmonster: The Making of a Horror Movie”, you mock some friends getting together to make a horror film that they can sell at horror conventions. I see this movie as probably a pretty true depiction of what a lot of horror filmmakers do, what do you think? 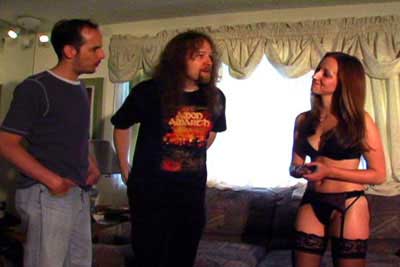 It’s a rather believable depiction of what SOME indie people do. Most people just TALK about making movies. They never really go through with it. I’ve also run into a lot of people who are in their 4th year of making their first movie. But getting back to the filmmakers, it seems that I have made a movie that is best enjoyed by people who have experience making films. Well, I hope that people outside of that realm also enjoy the comedy of it, but the most heartfelt compliments came from filmmakers and some celebrities.

Do you have any wild behind the scenes stories from any of your movies?

Every movie has some sort of catastrophe. On one set an actor threw a dummy off a cliff. The dummy landed about 30 feet from me, but the actor thought it would be funny to descend the cliff. I only had 2 minutes available for shooting that silly behind-the-scenes stuff, so I told him not to move until I could get a good focus on him. I wish I had just rolled. The actor fell off the cliff and broke four bones. The irony is that my character in that movie had an evil fantasy of that actor’s character dying in agony. After some months of reflecting upon that bad day, I thought about all those clips shot by people who managed to set aside their horror and were able to film some real-life accidents. Part of me will never forgive myself for passing up such awesome footage. But it’s good to know that I care more about running to the rescue… 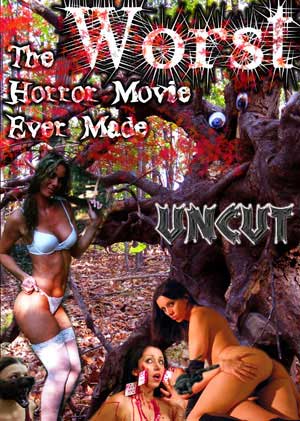 Who are your influences in the horror industry?

It’s hard to say, because I make comedies, mostly. But I am working on some disturbing projects, like “Breaking Her Will.” But even if I were 100% horror, it’s very hard for me to be influenced by something. I like to do things my own way.

I’ve noticed that you feature a lot of Heavy Metal in your movies, do you have any ties to the music industry?

Yes, I have cultivated relationships with bands and record labels for many years through my radio shows and by publishing “The Grimoire of Exalted Deeds” magazine. One of my favorite things to hear from a viewer is how I got him or her into one of the songs that played in my movies. 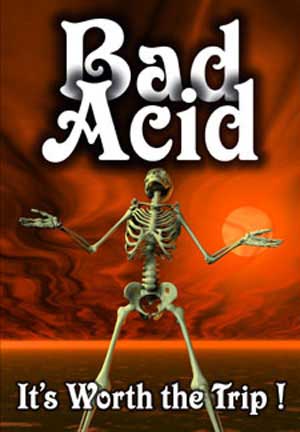 You’ve had female nudity in some of your films, when marketing your films do you find that sex sells?

Believe it or not, sometimes it’s a bad thing. At horror conventions I notice consumer behavior. Sometimes a group of people will come up to my booth and the people will scoff, showing each other the DVD artwork and saying the word “p*rn.” They leave without buying anything. But one of them will come back later and privately buy one, usually with some kind of strange excuse. I want to say to these people, “It’s ok to admit that you jerk off.” Another strange behavior is that of the lone consumer who approaches my table, and says “smut” and then walks away. I’m not a high-pressure salesman. I don’t try to change the attitudes of these people. If these people are so repressed or so dense, I don’t really want them watching my movies anyway. 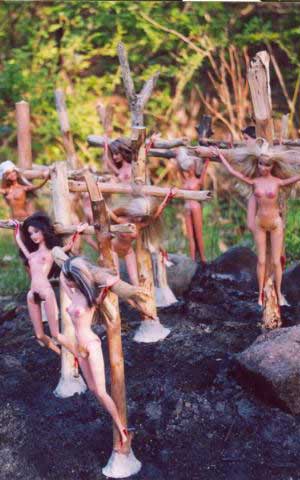 But other than that, I really don’t know what effect the scantily clad women have on DVD sales. I can imagine that it prevents guys from buying these movies in front of their girlfriends, and in some cases I can see how that kind of packaging can make some people dismiss the movie as stupid soft-core, but I really have no data. 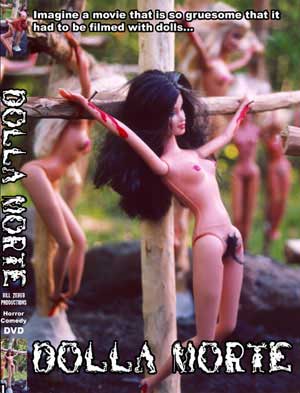 What was your favorite horror movie when you were a kid?

When I was a kid I remember actually being scared for weeks after seeing certain movies. I wasn’t traumatized. I was scared in a healthy way. It stimulated my imagination. I think that everyone enjoyed the exorcist for that reason. But as I grew older I didn’t like horror that had any kind of Christian themes – themes that validated Christianity. What I mean by that is that certain gothic tales seemed almost like they were written by the church. In those movies, it was only the power of god that could save mankind from the monster. I hate that. When I read The Keep, there was a part when the vampire-type monster seemed to fear the crucifix. This made the Jewish father and daughter ponder what that meant. It turned out that the monster just pretended to be afraid of the cross. THAT kind of religious content I like because it shows how ridiculous religions are. I do not respect any religion. When people repeat the old saying, “You have to respect a person’s religion!” I always ask “Why?” Why would I respect an act of stupidity? Why would I respect a person who suspends logic? I don’t mean that I should go around and use a bible as toilet paper, or to ruin someone’s good time while I am in a social situation, but in my movies I attack religion with great relish. wow. Sorry for the rant.

What horror projects do you have on the horizon?

In “Breaking Her Will” I explored what would happen if a girl got caught by a sexual sadist. Stories about serial killers are pretty much the only stories that scare me as an adult. They scare me because there really are villains like that living among us. But I am going to make a traditional monster movie soon, called “Night of the Pumpkin.” I just haven’t decided anything about the tone. it could be campy, or it could actually be serious.

Do you have any advice for someone who wants to start making horror movies?

No, because the people who end up making movies are people who don’t need advice. These people don’t accept setbacks, obstacles, or any kind of excuse. They make movies despite any hardship. They don’t need someone else to hold their hands and to walk them through, step-by-step. It’s either in you or it’s not. Advice should only come AFTER you’ve recorded some stuff, ha ha.