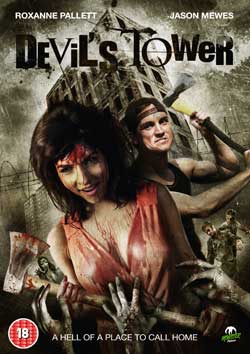 When Sid’s friend goes missing, he and new girl Sarah investigate disappearances in their tower block. Uncovering the secret of a vengeful ghost possessing a horde of zombies, they must fight for their lives – and their souls.

Devil’s Tower is an odd film to review. I use the word ‘odd’ not to indicate that it’s a ‘bad’ movie, per se, but just to note that I have a broad range of opinions about the film. First, this one is an excellent example of how American ‘gritty’ is often different than British ‘gritty’, as far as tropes go.  Considering that 90% of the film takes place inside a run-down high-rise apartment building, I really liked the overall production design. We’re introduced to the building, with its dreary, brutalistic architecture during the opening credits, which serve to drive home this movie’s setting. Two other bits happen quickly to set the story off: a young woman (played by the charming Roxanne Pallett) is clearly thrown out of her house by her mother, and quickly finds herself at a social services agency seeking help, so we get a solid feeling of trouble early-on. Additionally, we see a young couple entangled on the roof-top of a building, engaged in some bizarre maybe-foreplay, maybe-domestic-violence exchange that ends poorly for both of them.

From there, we quickly learn that the young woman, Sarah, now must live in this bleak building (which is spooky enough without any CGI!) The film trots out the standard list of supporting players: the building manager, the building Superintendent, a few squatters, a few junkies etc. Jason Mewes plays Pallett’s erstwhile side-kick in the film and they both spent a good amount of time uncovering, layer-by-layer what is really going on. As a minor aside: Mewes has aged quite well, following his Clerks and Jay and Silent Bob Strike Back days.  Admittedly, this character isn’t much of a deviation from his “stock” character of Jay, but effuses a pretty serious tone here.

At this point, I feel there is value in me clarifying what is really going on! Basically, what we’ve got here is a poorly-delivered zombie movie mashed up with a well-conceived possession movie. All that notwithstanding, the whole business is more confusing than it is anything, really. Yes, it’s spooky. Yes, it’s creepy and atmospheric — heck, there’s even a little bit of gore here and there. Sadly, though, this film really isn’t scary. It just fails to frighten. I’ll be the first to confess that everything can’t be the next Alien or The Exorcist. But this is more “haunted” than “horror” going on here. Considering this, maybe such a thing will work for some viewers…I dunno! A common technique often used in film reviewing goes something like, “Even though Actor X is great at what she does, even she couldn’t save this disaster of a film.” Strangely, the opposite is true this time around. Pallett’s high-level skills as a professional really raise this film out of the garbage heap, and place it firmly onto the Land of the Mediocre. I actually watched this one 3 times(!!) before writing this review. It has a strange allure to it that’s hard to define; but, the actual “story”?  I’m still scratching my head over most of that.

One thing I appreciate is the director’s use of televisions/screens within the film. That whole concept is often done wrong, but most of this fits in with the story (and even propped it up in a few places!)  I don’t want to spoil anything, but I will say that the building’s Superintendent (my American word, thank you!) spends a great deal of time watching video screens hooked to cameras all over the building’s sections and floors and he knows (and has known) that something is just not right with this building. 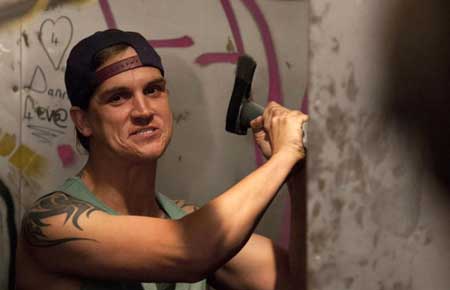 Overall, I’ll be a super nice guy and give this one 2.5 out of 5 coffins (yes, I’m being a bit generous there). A few of the funny bits are funny (at least, I think they were trying to be funny in those scenes!) Many of the characters are able to stand on the own two feet within the story, although some just create more noise than anything else. There are a few pretty heavy sex scenes (that, of course, set the stage for attacks/violence) and I spent a lot of my time scratching my head during those, asking, “Now, what is this bit about, again?” But I’ll say pointedly, that this fairly short little film (about one hour and twenty minutes in run time), works in enough of an old-school Expressionistic theme that you’ll just have a hard time looking away!