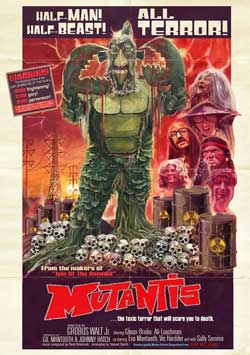 When an unscrupulous scientist drags his stepchildren out into the forest to use them as bait in the hopes of luring out a big foot, not even the team of hillbillies he hired can contain the horror they find: the horror of Mutantis! Only the adventurer Dr. William Fury may be able to stop the beast, but hope dwindles fast once Dr. Fury realizes that the monster is not only intent on murder but procreation as well. Could this be the end of the world as we know it?

Everything in Mutantis is crap. The sound has been dubbed, the wigs are the kind you’d find at a bargain basement, the camera work is shoddy, the acting is terrible and even one of the main characters has a change of ACTOR multiple times during the film. Everything about Mutantis is crap, and it’s done intentionally. Camp parodies like Mutantis walk a fine line. Trying be as bad as possible, but do it well at the same time is an art and more often than not attempts produce results that are laughably bad, for all the wrong reasons. Mutantis tries very hard to walk this fine line, so let’s see if it does so with the grace and dexterity of a Cirque Du Soleil acrobat, or if it snorts the line up like Le’Veon Bell on a lazy Wednesday afternoon. 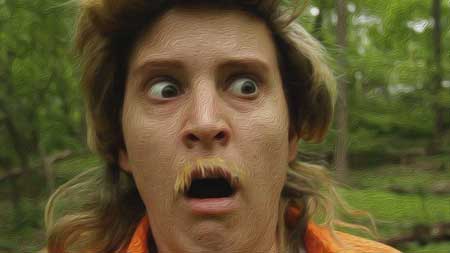 Father Joy takes these three “teenagers” on a camping trip to a radiated forest valley with nefarious intentions. He wishes to use them as bait to capture the elusive Mutantis, a half chicken, half lizard, half lobster, half fish monster (I was never good at maths) born after a drunk Indian who huffed toxic waste had sex with an old whore who lives in the valley… That’s right… “Wow!” I hear you say, “How could Mutantis be more awesome Daniel, considering it’s all those animals in one, and it’s part human too?!” Well, my good friend, it is. Mutantis is also a hermaphrodite (both male AND female), with a giant vagina and massive penis which retracts from said vagina. Mutantis is bloodthirsty, hornythirsty (that sounded better in my head), and ready to mate!

After all the death, sex, rape, redundant scenes and bad acting ensues, Doc Fury, a geologist with a very entertaining South African-like accent, helps our two remaining survivors, Cindy and Dennis, to destroy Mutantis. They achieve this feat by lubricating a live electrical line with their, er, love juices, tricking Mutantis into eating the live wire, become electrocuted and disappear into a puff of smoke. Yes, you read that right…

As mentioned before, this was (I hope) intentionally filmed as crap as possible. There are poorly focused shots, heads out of frame, dialog exposition, colour grading issues, etc. Whatever can be done badly, has been done badly. It adds to the campy feel of things, however some of the “shitiness” was done in spurts, like as if the director suddenly remembered he needed to cut the actors’ heads out of frame, resulting in a little inconsistency in this respect. For the most part though, the campy feel was handled quite well.

Mutantis itself looks appropriately crap, a throwback to the creature features of yesteryear. I’m sure if this was shot in black and white, Mutantis would look pretty scary.

All the sound and dialog was added in post, so it is rather clean and crisp, enough for my faltering ears to appreciate anyway. A film set in a forest full of dead leaves on the ground must be a bitch to post sound for. The music used was appropriate to the film and the era it was meant to be in and Mutantis’ clucks and roars sounded well. A word of warning though, if you have issues watching films where the voice work is out of sync with an actor’s lips, this is not the film for you.

Story wise, it’s as bare bones as they come. Don’t expect any character development, arcs or anything else of a cerebral nature. The film tries to shoe-horn a message in about how man should not mess with nature, but it’s as tenuous as they come. The film also attempted a sub-plot about two nuclear plant henchman out for Father Joy because of his interest in the radiated forest, which they dump toxic waste in, but it’s never fulfilled in any way, shape or form, hell, the henchmen never even get to face Father Joy because Mutantis kills them before they can.

In terms of comedy, there are a number of laughs to be had, as well as numerous groans. I found the death scenes the funniest, but there was some dialog that was unexpectedly amusing. Doc Fury’s constant “hmmm” toward the end of the film was funny to me also.

Cindy can be considered our main character, but she isn’t given any decent arc or depth. Sure, I know not every film needs a lot of character development or for every character to be relatable, but every film should follow a modicum of the tried and tested mechanics of storytelling, no matter how camp they are trying to come off as. This is what can make a mediocre film good.

For all the many, many faults in Mutantis, I still had some fun. It’s deranged and gory with creative kills and a good dollop of camp. The fact that you know it knows that it’s crap and is intentionally doing it, keeps you watching. Mutantis knows what it wanted to achieve and I think it achieved it.

Would I watch it again? Maybe just the death scenes to have a laugh with friends. Would I recommend it to people? Well, if you enjoy films like The Reader, then you probably wouldn’t be the target audience for Mutantis, but if you like camp parodies and don’t mind budget SFX and storylines, give it a go, you should find it enjoyable in some twisted way. At the very least you will enjoy the imaginative kills. 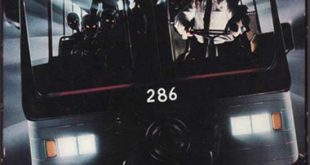 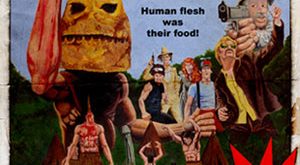