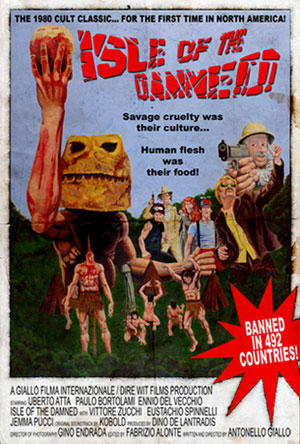 Isle of the Damned, originally released in Italy in 1980, brought Giallo under fire yet again by the Italian government, who were outraged by the shocking and real scenes of primitive tribal rituals and cannibalism portrayed in the film. The film has been long out of print, but is presented here in a digitally remastered form.

Isle of the Damned, one of the fake trailers entered in Robert Rodriquez’ SXSW Grindhouse competition last year, is now a full-fledged feature of its own, and recently premiered in Baltimore and Philadelphia. It was filmed entirely in Maryland.

Written by Mark Leake, and directed by Mark Colegrove, Isle of the Damned plays off of genre conventions of the Italian cannibal films of the late 70s and early 80s, complete with poorly dubbed English voice-overs, and under the guise of being a long-lost film from 1980 directed by legendary filmmaker, Antonello Giallo.

Isle of the Damned is the follow-up to 2005’s Pleasures of the Damned – Leake and Colegrove’s first foray into grindhouse territory.

“Leake’s script was written as though it was something that would have actually come out of that era, and so a lot of the film’s humor comes from knowledge of the cannibal films, and Italian horror in general … it’s full of winks and nods. Of course, it’s played for laughs, and we do ham it up a lot, but all the gore and sleaze of the original films is still intact.” says Colegrove.

This cannibal movie spoof takes every sick and raunchy turn down the road of depravity, mocking such classics as Cannibal Holocaust & Cannibal Ferox. It reminds me of that Beastie Boys music video, “Sabotage” with the characters all decked out in fake 70’s wigs and mustaches. The bad voice-overs rival every great Kung Fu movie you can think of. This is an adventure like you’ve never seen before, as Jack Steele goes in search of the Lost Treasure of Marco Polo on Cannibal Island.

In his quest, Jack and his merry band of misfits include Billy (complete with cap propeller reminds me of Stewart from MadTV but gay), Thompson (the fat %$%*@ rapist), Cain (the man-servant), a Pirate (with eye patch)… and a cast of crazy cannibals, among others.

Get ready for all the rape and baby eating that your eyes can handle. If you’re a fan of those old Cannibal movies, I think you’ll like this! Also, I think fans of Mystery Science Theatre 3000 will like this too! 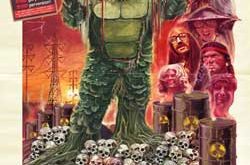