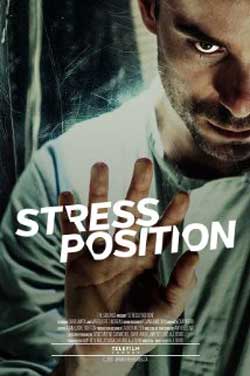 A psychological experiment between two friends spirals out of control. How bad could it be?

To begin, we have the introduction to a different kind of film. “Stress Position” (2013) is technically both film and absence of. The movie plays like a project, which by all accounts is project. If that doesn’t confuse you then let’s dig into the meat of what this movie really is. 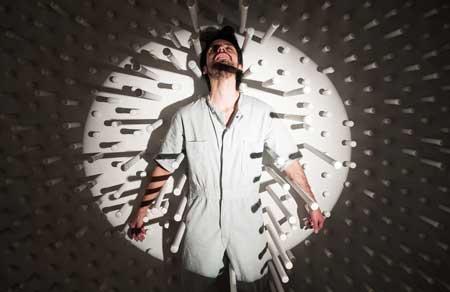 As per the synopsis, 2 friends decide to participate in a film project. One being Actor David Amito and the project leader filmmaker A. J Bond. As we open on the 2 of them exchanging memories and dialog much like if they were forming words in an episode of the children series “Electric company”, we learn about their history and the experiment they both have agreed to (It’s also wrapped under a money bet). 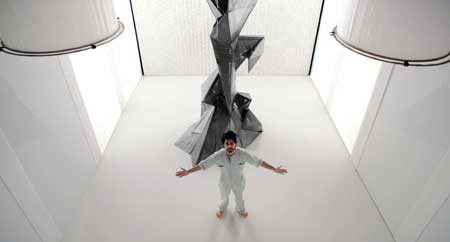 David has agreed to subject himself to “legal” torture for the duration of 7 days under the agreement that he will disclose the password to a device that unlocks $10K (to AJ if he gives up). The agreement details are a little gray but are revealed here and there thru dialogs that occur. From here it begins to look more like a scene from “Clockwork Orange” and “THX 1138” combined as David sits alone in a brightly lit room absent of stimulus other than a weird modern art sculpture made out of pointy metal.

David is woken up per drips of water as he tries to sleep by a faceless featureless participant who enters the room. This continues as other methods are tried such as tickling, seducing him and stripping him naked. David is told by AJ per way of a giant monitor that he will be referred to as “Sheila” and allowed bathroom privileges if David agrees to his small requests (self portraits using hair and blood etc….). 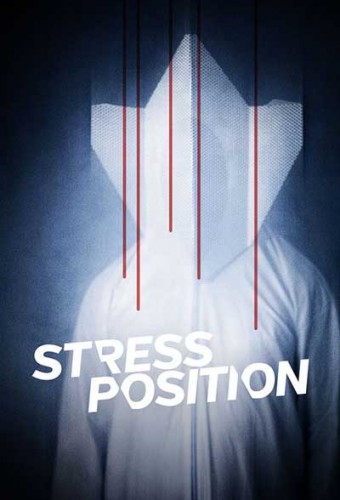 Now while most  at this point will start to wonder what it is they are watching, it does have this behind the scenes narration that I wasn’t sure of at times if it was acted or planned. We also quickly move from situation to discussion as AJ discusses with the producer Marguerite Moreau his intentions on breaking David. Things are tied and soon AJ is back to exchanging dialog with David. 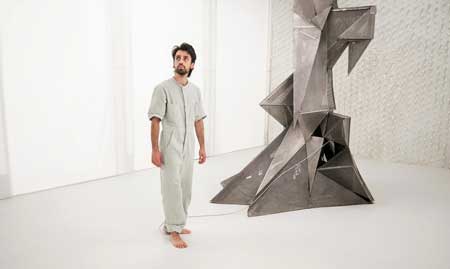 The last act of the film focuses more on AJ as he is made to also endure similar acts in the confines of this space. Viewers will of course quickly make comparisons to the “Cube” like environment which is always revealed as a set prop in the middle of a warehouse. The film gets points for its originality of presentation but also tends lag in some areas that just feel downright slow. Thee is a certain appeal to its “wizard behind the curtain” foundation that keeps it interesting. The movie never really dives into what horror fans would consider “torture” but instead takes on a more emotional philosophical approach to this to prove a point. Inspired by the reported treatments of prisoners at Guantanamo Bay, I believe the filmmakers here were trying to convey some test of insight and realism to its intended audience.

This Canadian creation is due to arrive from the team at BrinkVision in an upcoming release.The title “Stress Position” sounded a bit like bad English to me however viewers still are likely to gain a new experience from checking out the film. What matters most is that we live in a culture that complains of redundancy and directives. Separating the “Cube” franchise likeness, viewers can finally feast on a real piece of original movie making. Whether you regard it as brilliant or confusing is your call…..wildly entertaining! 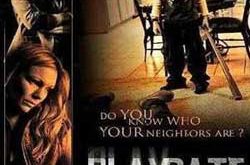 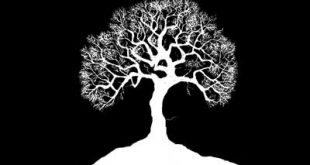