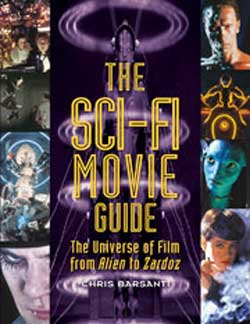 The good folks at “Visible Ink Press” have put in extra crunch time to bring ya a volume chock full of science fiction films for fans of interest. The new book is titled: “The Sci-Fi Movie Guide: The Universe of Film from Alien to Zardoz” containing hundreds of quick blurbs about the leading films of its genre.

Authored by Chris Barsanti, this book is indeed handy as a quick-down-and-dirty-paragraph read showcasing tons of sci fy releases over the years. The publishers have designed it so that you can take less than a minute to get the gist of every science fiction film they were able to wrangle up. This approach is a quick and handy aid for digging into films like “Dune”, “Food of the Gods” and “Brazil” which in most cases require the reader to indulge in several pages of analysis and review (as I’ve found in other books).

While my intention is not to introduce negativity into this release, it should be noted that even with its 510 pages it is not a complete volume of every science fiction release ever created. My determination of this was pretty basic……a simple look at my science fiction films shelf to see how many titles were included. While it passed the test of obvious more popular titles such as “Alien”, “Inception”, Matrix”, “Gravity” and “Elysium”, I was still able to find quite a bit that were absent from the volume (or maybe this review will prompt their inclusion into the next edition release??)

Science Fiction titles such as “Cyper”, RIPD”, “Push”, Branded”, “2012” and “Beyond the Black Rainbow” were no-where to be found. I would usually discount this lack of inclusion due to some being rather new, however the volume did contain recent films like “Divergent” and “Transcendence”……so no free pass there. The other observation here is that the book did include an isolated TV science fiction section. However, as overjoyed as I was to see this, the chapter was also lacking in quite a bit of noted Sci-fi TV shows that should have at least been mentioned (“Grimm”, “Lexx”, “V (recent remake”, “Space 1999”, “Terra Nova”, “Agents of Shield”, “Almost Human” and “Life on Mars” (to begin with) were absent. Which brings me to the conclusion that perhaps a “TV Science Fiction Volume” might be a good suggestion as a sister release to this??  If that doesn’t fill a volume then a Horror / Science Fiction TV Series reference book would be the next logical collective.

The takeaway here is that these books are meant not to just fill a library but to offer suggestions for material to check out. Maybe you have never seen “Def-con 5” and want to know a little more before hunting down this old forgotten gem of a film. Or maybe you were browsing shelves recently and noticed a movie called “Dreamscape” that perked your interest. The summaries provided are more than enough to make an educated decision about what appeals to you and what doesn’t. The Sci-Fi Movie Guide: The Universe of Film from Alien to Zardoz” like it says, is a fun romp featuring nearly 1000 short film reviews.

This rounds out my review for which the most part is that this release should be given kudos for the content it did deliver. 561 pages is still alot to browse thru and alot to read. It is also a bridge for suggesting several underrated gems that are still deemed “under appreciated and forgotten”. Science Fiction isn’t just about main stream success at the box offices, its  about cinematic achievement that challenge you mind and introduce fresh new concepts per visual stimulation and wondrous storytelling. There is much in this book that will pave the way for “just” those types of mental stimulation. “The Sci-Fi Movie Guide” is a great place to start.

Chris Barsanti is the author of previous film books such as “Filmology: A Movie-a-Day Guide to the Movies You Need to Know” published in 2010.

Check out “The Sci-Fi Movie Guide: The Universe of Film from Alien to Zardoz”” at VisibleInk Press