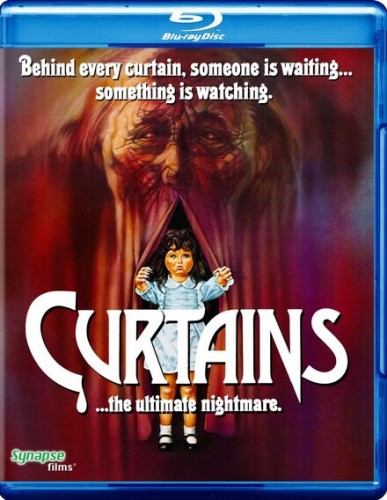 An actress (Samantha Eggar) escapes from an asylum to attend her husband’s (John Vernon) casting session for starlets.

Have you ever wanted sometime sooo badly you would do anything for it?  Well for me, I have wanted Curtains (1983) on DVD and Blu-ray for years. I own a 35mm print of this film, and I’ve seen it projected three times since 1998. The image looks very similar to the VHS Vestron Video release which I first rented in July 1986 which is to say that it is dark, murky and sometimes difficult to see all of the important details. Finally, all of this has changed thanks to the fine folks at Synapse Films who have correctly presented the film in the proper aspect ratio and remastered the image. Curtains, never released in any other home video format (except for several DVDs mastered from the aforementioned VHS release), is now finally available on DVD and Blu-ray, and the result is spectacular. 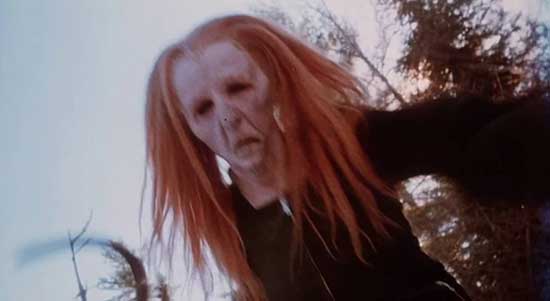 Samantha Eggar and John Vernon star as actress and director team Samantha Sherwood and Jonathan Stryker (yes, yours truly’s pseudonym) attempting to bring the story of a mental patient, Audra, to the screen. When Eggar has herself “committed” to an actual mental hospital to research the role, Vernon leaves her there with plans to make the film with a different actress and engineers a casting call at his estate without Sherwood’s knowledge. Curtains fails to give more than just a hint as to his motivation for doing this (sleeping with two of the actresses he auditions seems to be one reason – what a surprise!), but it does set up some truly creepy set pieces, the best and most memorable of which include a large, sad-eyed doll on a rain-swept road, a masked killer wielding a sickle on a skating rink, and a (somewhat prolonged) chase through corridors inside of a theatrical warehouse which calls to mind the backstage milieu in Michele Soavi’s Stage Fright (1986 – another great slasher film making its Blu-ray debut in September 2014). The logistics of the murders make little sense, but then this is a thriller, so it’s wise not to think too much about it and enjoy it for what it is. 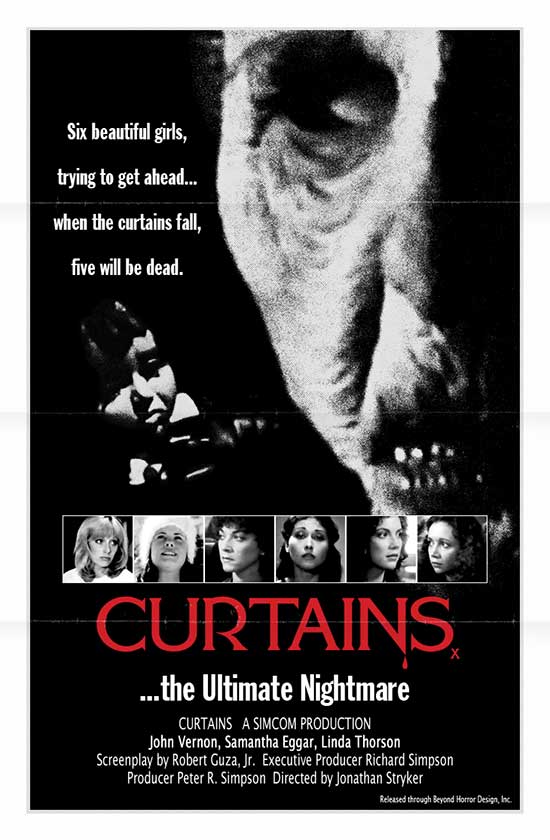 The film’s strengths lie in the casting, the music, and the cinematography. Eggar and Vernon are terrific, and Lynne Griffin, an actress we see far too little of these days (she’s the suffocation victim in the original Black Christmas), is hilarious as a comedienne vying for the role. Linda Thorson is great as Brooke Parsons, an elegant actress who discovers Lesleh Donaldson’s head in a toilet!

Composer Paul Zaza has created a brilliant score for this film. The “sting” that punctuates the film’s opening title sequence as the word Curtains is cut across the screen can also be found in Prom Night, a film that Zaza scored before Curtains. I’ve often wondered if this score was originally composed for Prom Night and then rejected. It’s a score worthy of a soundtrack album and it deserves to get a release from Intrada, Varese Sarabande, Buysoundtrax.com, or Kritzerland.

I’m a sucker for Canadian horror films that take place in the snow (The Brood (1979) and Ghostkeeper (1981) come to mind), and Curtains is my favorite hands-down. One of the strangest and eeriest movies I’ve seen, the film has always gotten a bum rap. Far from a perfect film, the production had a lot of rumored problems from the word go and it seems that at this point in time the film is more notorious for what it was originally intended to be rather than what it in fact is. Filming began circa November 1980 and continued for months afterwards. The original director, Richard Ciupka, hand-picked by the producer due to his previous and well-regarded last-minute takeover of 1982’s Melanie, had his name removed from the film due to the fact that much of it was not what he himself had filmed. The ending was changed, as were several key plot points, and what results is something of a convoluted narrative that possesses an air of creepiness throughout. 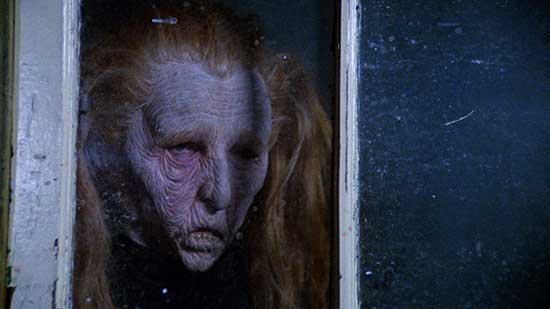 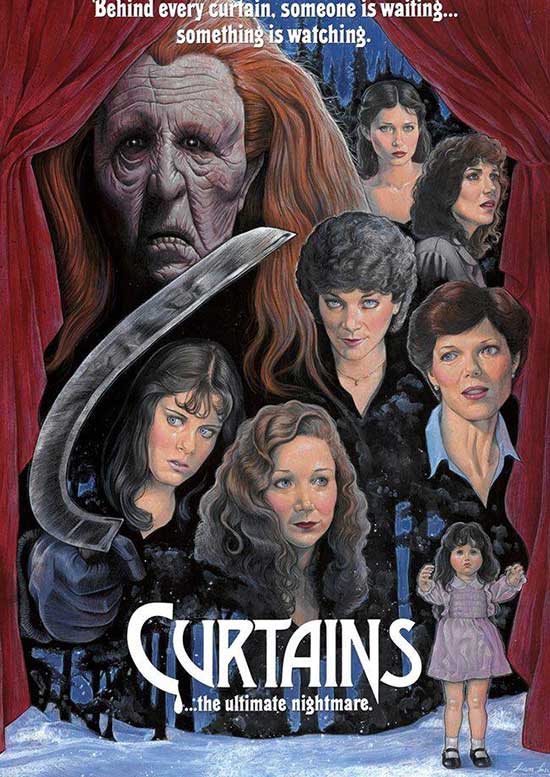 The extras on the Blu-ray are plentiful. In addition to the sterling and brightly colorful transfer, there is a 35-minute documentary called The Ultimate Nightmare: the Making of Curtains by Michael Felsher of Red Shirt Pictures. Key players in the film take part in being interviewed as do those who worked behind the scenes, particularly composer Zaza admitting his embarrassment at having his name on the credits and wishing that he had been fired during the film’s production, which is unfortunate given that his music does for Curtains what John Williams did for Jaws (1975). There is also a 15-minute documentary made at the time of shooting simply called Ciupka (pronounced CHOOP-ka) and it features some behind-the-scenes footage on the set of Curtains.

There is also a feature-length audio commentary moderated by Edwin Samuelson with actresses Lesleh Donaldson and Lynne Griffin and they are quite amusing to listen to. Audio interviews with the late producer (courtesy of the Terror Trap), actress Samantha Eggar (courtesy of Todd Garbarini), and the theatrical trailer round out the extras.

Much has been written about the scenes that had been shot for Curtains which ended up on the cutting room floor. Up until August 2009 these scenes existed but, amazingly, the decision was made at that time to destroy them. Why the footage sat in a vault for 26 years and was subsequently tossed in the era of DVD and Blu-rays is an incident that is not only unfathomable to me but it raises the question of who ordered the footage dumped. It doesn’t matter at this point, but I am grateful that the original source materials survived so that we all can see Curtains the way it was intended. Although I have been a fan of the film for 28 years, I feel as though I am really seeing it for the first time. 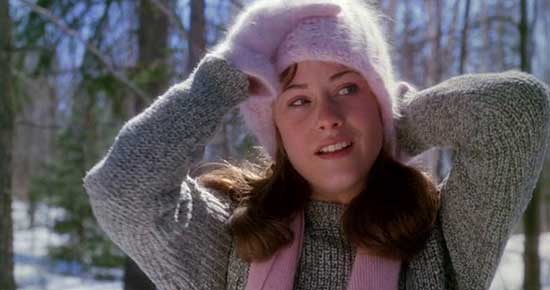 DO NOT HESITATE TO PICK THIS ONE UP!  A BIG THANK YOU TO DON MAY, JR., MICHAEL FELSHER, EDWIN SAMUELSON, SHADE RUPE, and the cast and crew of CURTAINS for making this FINALLY happen.