June 16th is the anniversary of the theatrical release of Alfred Hitchcock’s Psycho. A ground-breaking and disturbing horror-thriller, the movie has spawned a hoard of sequels and remakes, and inspired creepy graphic novels, television series and Halloween costumes since 1960. You have to appreciate a man in a gray wig and house dress, on October 31st! There is no denying that Norman Bates and his mother have made a lasting impression on American Horror.

The original story behind Psycho, written by Robert Bloch, was inspired by the real life serial killer Ed Gein. When Gein was arrested it was discovered that he had furniture, silverware, and even clothing made of human skin and body parts in his home. Psychiatrists eventually theorized that the man was attempting to make a “ 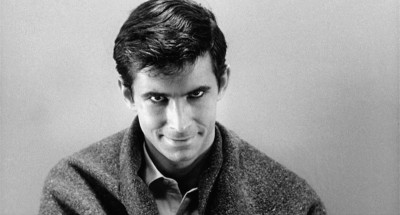 woman suit” so that he could pretend to be his deceased mother, who had been an extremely dominant woman. The gruesome story that influenced Robert Bloch’s Psycho further inspired the creation of characters like Buffalo Bill in Silence of the Lambs and Dr. Oliver Thredson, or Bloody Face, in American Horror Story: Asylum. Who knew such deeply twisted mommy issues could result in the creation of such terrifyingly compelling personalities?

The character of Norman Bates, half himself and half his long-deceased, controlling mother, is one that continues to spook and appall its audience with every remake and on screen adaptation. In March of 2013 a new series hit television about Norman’s early years in the ill-fated town of White Pine Bay, OR (changed from the original film’s town of Fairvale, California), called The Bates Motel. Though the series is set during the present, the characters are much the same and viewers are offered the opportunity to see the notorious mad man develop from a teenage boy into what we know he will eventually become. It is conceivably, a horror fanatic’s dream come true!

Though Alfred Hitchcock managed to terrify his audience time and time again with films like Frenzy, The Birds and Dial M for Murder, there was never one quite so unsettling as Psycho. The idea that someone so dangerously disturbed could be stumbled upon in a small town motel has stirred the creative energies of so many horror literature, film and television writers over the last 54 years that it’s difficult to sum up the utter awesomeness of Hitchcock’s accomplishment. If he wanted to scare the living daylights out of any woman contemplating solo travel, then he certainly succeeded.

Norman Bates is the OG of certifiable psychopaths in the fictional world of horror. He is the star villain of what is widely considered one of the greatest horror films of all time and on June 16th horror fans will toast to his fearsome derangement. Bates will be forever imitated, but never duplicated. Happy Anniversary, Buddy!