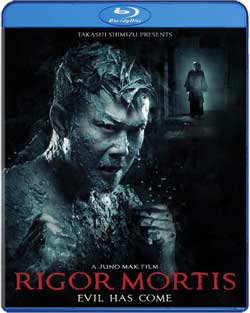 A public housing tenement is plunged into a dark storm of supernatural chaos. REVIEW: J-Pop star turned actor turned writer/director Juno Mak makes his directorial debut with Rigor Mortis, a decidedly offbeat but visually stunning homage to Asian horror films of the 80’s. Working with producer Takashi Shimizu (Writer/Director of The Grudge), Mak has fashioned a film light on frights but heavy on atmosphere and dread.  As the film begins, Chin Sio-Ho (Of 1985’s “Mr. Vampire” & essentially playing himself), is moving into a dilapidated apartment located in a public housing complex. A once successful actor, he now laments loss of his fame & fortune but he’s even more despondent over the loss of his wife & son, both of whom passed away. His plan is to move into the decrepit apartment & then quietly commit suicide. Upon his arrival, he meets Uncle Yin (Hoi Pang Lo), who is the building’s manager/security guard. As Yin lets Chin into his new apartment, he mentions how he knows everyone in the building, their family histories, etc, etc. All of this comes into play later in the film when it’s discovered who lived in Chin’s apartment before he did and what happened to them…

After Chin is left alone, he promptly fashions a noose and (as he lovingly remembers his son), promptly begins to hang himself. But as he feels his life ebbing away, he notices that there’s someone (or something) else in the room, and it’s slowly coming towards him. Suddenly, retired Taoist monk, Yau (Anthony Chan), bursts into the room and rescues Chin from the noose as he chases away the evil female spirit that was trying to possess Chin. Turns out that the building Chin has decided to move into is a hotbed of spiritual activity and by attempting suicide, he’s invited malicious evil spirits to possess him. Shortly afterwards, he meets kindly neighbor Auntie Mui (Hee Ching Paw) who tries to offer her support to him. He also meets oddball transient Yeung Fung (Kara Hui) & her young son, and after hearing of how they ended up in their current state from Yau, begins to develop a relationship with them. Meanwhile, Auntie Mui’s husband, Uncle Tung (Richard Ng), perishes in a fall down a stairway and in the hopes that he will return to life on the 7th day after his death, Mui hires Kau (Chung Fatt), a medium with experience in such matters, to help safely resurrect Tung. But you know what they say about the best laid plans of mice and men… 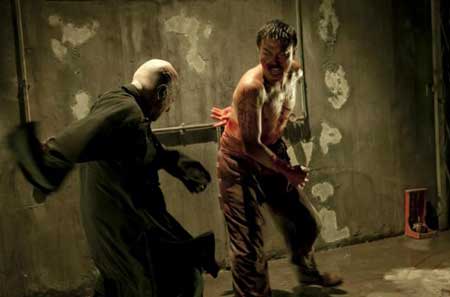 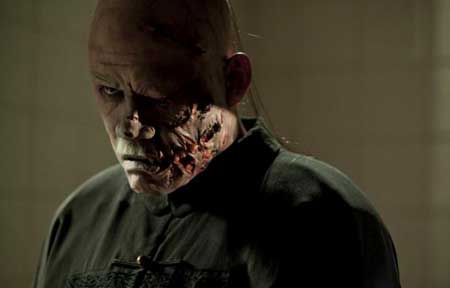 Rigor Mortis makes no bones on being heavily influenced by the aforementioned Mr. Vampire and once Tung accidentally turns into a vampire the film picks up considerably. But up until that point, Mak takes his time developing his characters and slowly revealing their lives layer by layer. It seems like every character in the film has a lot of backstory to them and this might’ve been an issue if the cast was any less talented but the combination of first rate talent & a really nuanced and involving script waylay that issue quite nicely. This isn’t to say that the film doesn’t drag at times though. There are stretches during which Mak seems a lot more interested in pushing the visuals rather than the story and while the film is a stunner to look at, looks can only carry you so far. Luckily, he intersperses some pretty nifty fight scenes into his narrative every so often to break up some of the mild tedium. 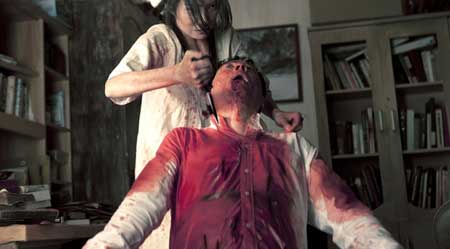 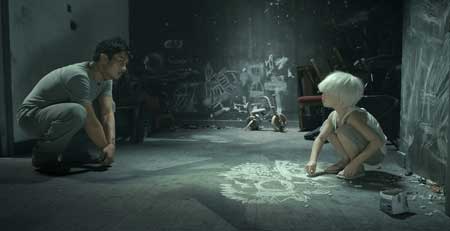 I cannot overstate how gorgeous the film looks. Rigor Mortis is saturated in filth streaked shades of grey & black (The apartment building is reminiscent of a prison ward actually). The spirits that inhabit the building aren’t any different save for the blood red tendrils that seem to flow from their shapes. The malicious twin sister spirits represent the best example of this as the tendrils emanate & writhe from their bodies as they scramble across floors & walls. Their look is heavily influenced by the “Long Black Haired” ghosts from films like The Grudge and while the look isn’t really as scary as it once was, Mak does his best to milk it for what it’s worth and for the most part, he succeeds. Especially in scenes of the twins running across the floor (They take on a canine gait), with their tendrils flowing wildly behind them .

As the film hurtles to its climax, Mak seems to lose his grip on the narrative which gets progressively more convoluted and focuses on the final fight scene between Chin & Tung. There’s a whole lot going on visually but it gets really confusing and it all ends with a coda that makes little to no sense to boot. Rigor Mortis touches upon a lot of different issues but the sense of regret & loss are the ones that permeate the entire film and it should be appreciated in that sense. It’s a very thoughtful horror film that wants its audience to feel the same sense & loss that his characters are feeling as they go through the drudgery of their lives. Subtract the ghosts/vampires and you’d still have a pretty potent drama happening here. 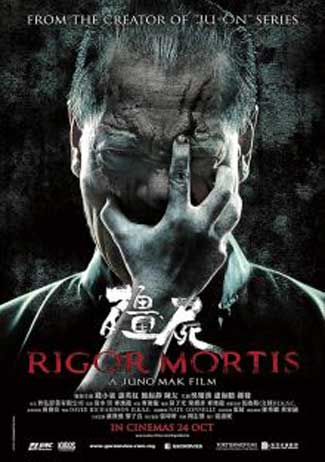 It’s not perfect, but thanks to some incredibly evocative production design & wham bang visuals, Rigor Mortis makes the most of it’s running time. I didn’t find it particularly scary but it’s definitely entertaining & ruminative. Those two words don’t usually go together too well but they do in this case. Rigor Mortis – 3.5 out of 5 shrouds. 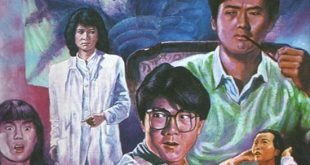 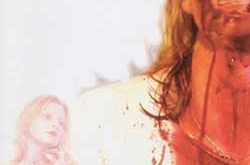