As the world faces an alien invasion, Major William Cage (Tom Cruise) finds himself in hot water as he is shipped off to the front lines deemed a deserter and a coward. On the battlefield he encounters a rarely seen enemy that sets off a series of events resulting in Cage reliving the day over and over again. With only the war-hero Rita Vrataski believing, and understanding, his fate, Cage begins to accept the idea he alone must face the alien invaders and save the human race.

Live. Die. Repeat. The obvious comparisons to Groundhog Day aside, Edge of Tomorrow is an original, killer-smart sci-fi, alien-invasion action epic. A far more interesting approach to humanities last ditch efforts to ending a war of the worlds in films such as Battle: Los Angeles, Skyline and The Darkest Hour. By comparison, the aliens in all these films are not too dissimilar, but Edge of Tomorrow has two things going for it: Tom Cruise and Emily Blunt. These two stars bring a rewarding amount of empathy, sympathy and, surprisingly, comedy to the film. The action sequences are tense and exhilarating while the human moments are touching, charming and often funny. Of course, Cruise and Blunt get some terrific help in that department by Bill Paxton in a supporting role. Director Doug Liman (Bourne Identity, Mr. & Mrs. Smith and Jumper) has a strong handle on the time traveling script which itself is incredibly sharp and to the point balancing high powered action, quiet human moments and heavy exposition. It is a tough balance that is nearly perfectly executed. Edge of Tomorrow may be the best sci-fi film of the year.

The film starts off following Tom Cruise’s Major William Cage, a cowardly, but intelligent, Army officer who is far more suited for marketing or politics than combat. Ironically he is undone by his own success where he ends up the scapegoat forced to participate unwillingly in the largest assault on the alien invasion, a WWII-like landing on the beaches of France. Manipulated by a crossed General (Brendan Gleeson) sets up Cage as a deserter and places him on the front lines with a ragtag group led by Master Sergeant Farell (Bill Paxton). It is not long before Cage is face-to-face against a little seen enemy, an Alpha, who is both killed by Cage and kills Cage bathing him in the alien’s own blood. Special blood it turns out, blood that allows Cage to reset the day upon his death. This leads him to join forces with Rita (Emily Blunt), a hero who was responsible for humanities only other victory against the aliens. Once the two come together, Edge of Tomorrow elevates into an engaging and fascinating exploration of Cage, fate and every day decision. 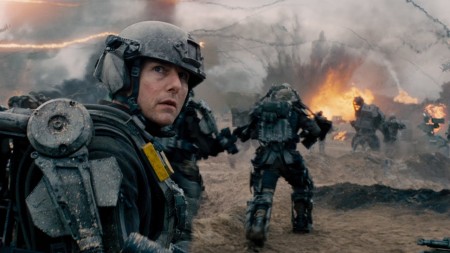 It is to Doug Liman’s credit (and possibly his staff of editors) that Edge of Tomorrow skates past its mine-field of plot holes many of which are inherited by a time travel plot from the onset. By concentrating solely on Cruise and a single mission, Liman is able to dance past nearly every turn that could have resulted in disaster. He spends a good amount of time focusing on Cage allowing the audience to become invested in the character, the potential in his growth, in his path, in his decisions both good and bad. He dazzles the sense with amazing shots of the battlefield with Cruise and his team leaping from a crippled war ship falling from the sky. He uses the repetition of the story’s conceit to both establish Rita as a hard-nosed, engine of destruction, a no-nonsense soldier and hero and to peel those layers back to expose a complex personality inside, hopeful, guarded, resourceful and determined. It is a c**ktail mixture of Liman’s previous films, the character conflicts of Mr. & Mrs. Smith and the adventure of Bourne Identity with a healthy dash of sci-fi spectacle. 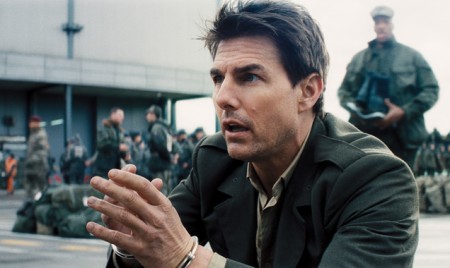 There is little doubt that Tom Cruise’s charisma is responsible for the success in the establishing of his character Cage. He turns a manipulative, cowardly role into a hero, one that the audience roots for. His personality combined with the script’s stubborn intent to give Cage a rewarding arc, make for a fascinating look at how each decision shapes a person’s character. If he chooses one path it results in disaster, another it displays a glimmer of hope of success. He has to face losing his loved ones and friends over and over each day. He must grow past these emotions that have previous driven his destiny to become something else in order to save humanity. After trying and trying until mental exhaustion threatens to claim him, he decides to escape instead, to allow the day to happen without his involvement only to discover that the outcome of such an action will cost humanity the entire city of London and all who reside there. He realizes there is no ignoring his role without a cost that is too high even for Cage on day one. The more Cage becomes determined and learns to deal with the weight of the world, the more he becomes the hero and the audience champions his every move. His growing relationship with Emily Blunt makes it heartbreaking providing emotional depth. 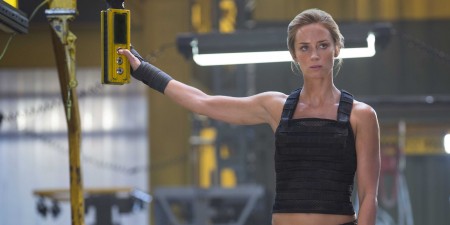 As much as Cruise is the star of Edge of Tomorrow, Emily Blunt is the heart of the film as Rita, the hero of humanity, who has survived the experience Cage is reliving over and over. She wears the emotional scars of reliving her reset like a suit of armor, harsh, protective. Nothing is able to penetrate the walls of her loss – except for Cage who now is the only other human to share her experience. As Cage learns over time, sharing the same day with her again and again, of Rita’s life and experiences, the audience discovers that Rita endure losing the love of her life over 300 hundred times. This experience is crushing once, three hundred times is unfathomable. As Cage begins to fall for her, Rita becomes the glue to his fate, the Miyagi to his Daniel. It is a winning performance. 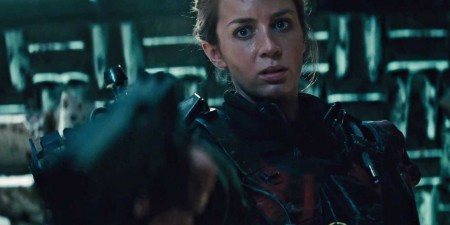 Edge of Tomorrow is a must-see Summer sci-fi spectacle. Cruise and Blunt are fantastic. The stakes are high, the action is tense and the character arcs are rewarding. The whole premise is fascinating realized in a rewarding and exciting way with incredible special effects, top-notch direction from Doug Liman and a tight, intelligent script. The exploration of fate, decisions, choices and humanity through reliving a traumatic day over and over reveals the idea of sacrifice and the importance of a single soul (not necessarily Cage in this case by the way). Edge of Tomorrow rises above it easy comparison to Groundhog Day that its trailers seem to highlight and the pitfalls of time travel to become one of the best science fiction, action, Tom Cruise films of the decade. See it!